Is There a Right Way to be a Boy? 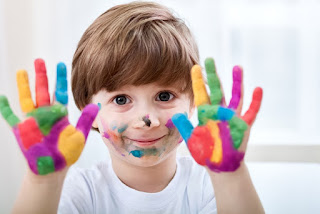 The Huffington Post recently posted a photo series from a project called #ABoyCanToo, portraits of boys who pursue interests traditionally associated with girls. The article, titled, “13 Empowering Photos Show There’s No Right Way to Be a Boy,” praises the project for “shining a light on kids who don’t let gender norms prevent them from following their dreams.”
The photographer behind the collection, Canadian mom Kirsten McGoey, told HuffPost that she drew inspiration from her own three sons, especially the 8-year-old middle child, whose favorite activities are singing, acting, ballet and tap-dancing. “He loves sparkles, pink, rainbows, reading, and has never been concerned if something was ‘boy’ or ‘girl,’” she gushes.
McGoey has photographed 17 boys, her own among them, whose passions range from baking to reading books to dancing onstage to wearing hoop skirts. “Our little boy loves to do his hair with all sorts of hair accessories,” reads a proud parent’s caption under one of the photos. “He was born to dance and take flight,” reads another. “Our stage loving boy… simply lights up when the lights go down and the spotlights turn on,” says a third. The lesson McGoey has learned from her photo subjects, the message she wants to convey, is that their interests may be unconventional but they enable the boys to feel they are talented at something and are valued.
There’s absolutely nothing wrong with this, and there is no need for traditionally-minded parents like myself to freak out. Young children are curious and should be encouraged to explore what interests them – that’s how they learn best – even if that interest ultimately fizzles out, as it often does. Sometimes what seems to be a kid’s passion ends up simply being a phase. When I was six I wanted to grow up to be, simultaneously, an astronomer and an archaeologist; needless to say, neither pursuit went anywhere, for which I’m relieved. My 6-year-old daughter used to be a tomboy and wanted to be the first female winner of American Ninja Warrior, and I encouraged that interest. Now she’s very feminine and wants to be, simultaneously, an architect and a doctor, and I’m encouraging those passions as well; but that doesn’t mean she is destined to become either one (although perhaps she is; time will tell).

It’s unclear why the world needs a hashtag encouraging boys to pursue careers that aren’t normally deemed macho. Perhaps this is news to HuffPost and McGoey, but it’s not like boys have never done this, and without compromising their masculinity. Ballet? No one ever thought Mikhail Baryshnikov unmanly. Cooking? The vast majority of 5-star chefs in the world are male. Acting? No one ever accused John Wayne or Russell Crowe of being sissies.
Nevertheless, as HuffPost puts it, “#ABoyCanToo aims to empower such kids to embrace their true passions, even in the face of gender bias and bullying, and to change other peoples’ perspectives about gender norms.” McGoey hopes this will spark conversations among other parents about “restrictive gender stereotypes for both boys and girls.” But as usual with such pleas to smash traditional sex roles, the celebratory tone of this article and the #ABoyCanToo project barely conceals a desperate fear of traditional masculinity and an urgent desire to eradicate it.
The radical feminist antipathy to masculinity, which is becoming deeply entrenched in our cultural consciousness, has made the breakdown of “gender norms” a social justice obsession, and children – both boys and girls – will suffer for it. Such activist parents are just as uncomfortable with boys being boyish or girls being girly as some traditionalists they despise are with the opposite. The problem today is not so much that boys are being repressively steered into rigid, macho sex roles, but that they are being steered away from traditionally masculine attitudes and interests. They are being told, falsely, that gender is a social construct without any biological basis. Our cultural elites – who obsess over the buzzphrases “gender norms,” “restrictive gender stereotypes” and “gender bullying” – want us to celebrate it when a boy flounces around in a “Scarlett O’Hara dress,” as one of McGoey’s subjects enjoys, but they are uncomfortably silent or openly sneering when a boy wants to help Dad rebuild a car transmission or play tackle football.
First of all, adults need to let kids be kids and be themselves. In time, they will work out who they are for themselves – without conformist bullying, to be sure, but also without social justice meddling to steer them in frankly unnatural directions. Our most important task is to guide children morally, spiritually, and intellectually to become good, decent men and women. It’s a reductive view of our children and of our role as parents to obsess over erasing masculinity from our boys and worry whether they are being properly molded to the chimeric fantasy of a genderless utopia. That’s gender bullying, too.
From Acculturated, 7/15/16
at 7:28:00 AM