The Antidote to Toxic Masculinity 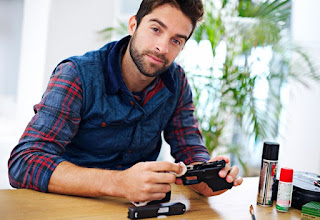 The recent slaughter of nearly 50 people in an Orlando gay bar is now the deadliest mass shooting in American history, and as such it has ratcheted up our national conversation about guns and terrorism into a frenzied crosstalk about whom and what to blame: Islam? The NRA? Homophobia? Salon’s Amanda Marcotte believes it can all be explained by “toxic masculinity.”

Toxic masculinity is a concept from the men’s movement that feminists like Marcotte have pounced on to explain the root cause of all violent male misbehavior from gay-bashing to domestic violence to terrorism. “It is a specific model of manhood,” she writes, “geared towards dominance and control. It’s a manhood that views women and LGBT people as inferior, sees sex as an act not of affection but domination, and which valorizes violence as the way to prove one’s self to the world.”

I don’t dispute that the notion of toxic masculinity applies to many men. But Marcotte, heavy on sneering and light on facts, uses the concept to rope such losers together with her favorite target – Republican male gun owners, whom she dismisses as posturing and insecure bullies – and to make them responsible for mass shootings with such varied motives as mental illness, workplace violence, and Islamic terrorism: “[T]his persistent pressure to constantly be proving manhood and warding off anything considered feminine or emasculating is the main reason why we have so many damn shootings in the United States.”

Marcotte goes on in that vein – and on and on: “Being able to stockpile weapons and have ever bigger and scarier-looking guns is straightforward and undeniable overcompensation [sic] insecure men, trying to prove what manly men they are.” We need a society, she says, “with more dancing and less waving guns around while talking about what a manly man you imagine yourself to be.”

She hastens to reassure “whiny dudes” like me that not all masculinity is toxic, but she doesn’t offer a nontoxic counterpoint. Presumably it is the opposite of her caricatures of gun-owning Republicans. No doubt Marcotte respects a man who abhors guns and violence – someone like the New York Daily News’ Gersh Kuntzman, perhaps, who wrote an unintentionally hilarious piece about his “terrifying” first experience shooting an AR-15. The PTSD and bruising he claims he suffered from firing a weapon that a seven-year-old girl can handle must be nothing compared to the drubbing he is now taking on the internet.

Anyone who has real-world experience with bullies and bad men knows they are not deterred by self-emasculated pacifists, disapproving lectures, or angry feminists. They are stopped only by good men who are capable, armed if necessary, and ready to do violence in defense of the weaker and the innocent. But Marcotte doesn’t believe in heroes; she flatly asserts that “the mythical ‘good guy with a gun’ who is [sic] promised to stop mass shootings has yet to actually produce himself.”

Marcotte isn’t buying it; she conflates both good guys and bad and rolls her eyes at them all: “[E]ven though toxic masculinity is clearly the problem here, you have a bunch of conservatives running around and pushing toxic masculinity as the solution, as if all we need to end violence and terrorism is a bunch of silly posturing about who is the biggest man of all the menfolk out there.”

Conservatives believe no such thing. This is an absurd accusation. What conservatives believe is that Americans have a natural right to self-defense, guaranteed by the Second Amendment. Conservatives don’t believe that the answer to gun violence is to deprive law-abiding citizens of a fighting chance to survive a mass shooting. But Marcotte believes that shooting back is a fantasy which comes “from a place of deep insecurity and gender weirdness that treats phallic symbols like they are magical totems.” Her obsession with reducing everything masculine to sexual insecurity says far more about her than it does about conservative men, none of whom she apparently knows or cares to understand.

I, however, know plenty such men, including gay conservative gun owners. They are nothing like the straw men of Amanda Marcotte’s hateful imagination. They don’t “wave guns around” – because they’re trained and safe – and they don’t boast desperately about what manly men they are, because they are manly men. Many are current or former military or law enforcement. They’re not irrational or insecure. They’re respectful of women, and their women love them for their quiet strength and chivalry. And they’re not violent – although they are trained, armed and prepared to wage righteous violence when their families, friends, or country are threatened, as free men should be.

That’s not toxic masculinity – that’s the antidote to it.