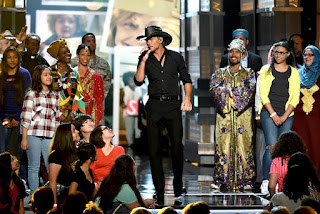 I’m not especially a fan of country music, although I do respect the genre for being song-oriented, for telling stories about real human emotions, and for featuring performers who can actually play, sing, and write – all of which is too often absent from the sampled beats and profane braggadocio that pass for music and lyrics in contemporary Top 40. So it took a friend to introduce me to a touching song performed by superstar Tim McGraw that not only was a number one hit this year, but that is inspiring a groundswell of unusual activism among its fans.

The single “Humble and Kind,” written by singer/songwriter Lori McKenna, was released on January 20 off McGraw's album Damn Country Music and went on to reach number one on the country music charts in both the United States and Canada. The song’s video, featuring affecting imagery from Oprah Winfrey’s documentary Belief, won “Video of the Year” at the 2016 CMT Music Awards.

In the lyrics, McGraw offers some parental life advice to a child departing for college – and in fact, his own daughter Gracie, who recently journeyed off to school herself, was in the forefront of his mind when he recorded the song. The sentiment was genuine. “I cried through every take,” he admitted. “It certainly is a letter to your kids in a lot of ways.” McKenna, too, said she had her own five children in mind when she wrote it.

A few excerpts from the lyrics below:

Go to church ‘cause your momma says to
Visit grandpa every chance that you can
It won’t be wasted time
Always stay humble and kind.

Hold the door, say please, say thank you
Don’t steal, don’t cheat, and don’t lie
I know you got mountains to climb but
Always stay humble and kind.

When the dreams you’re dreamin’ come to you
When the work you put in is realized
Let yourself feel the pride but
Always stay humble and kind.

Don't expect a free ride from no one
Don’t hold a grudge or a chip and here’s why
Bitterness keeps you from flyin’
Always stay humble and kind.

The song closes with a reminder to pay your success forward:

Don’t take for granted the love this life gives you
When you get where you’re goin’
Don’t forget to turn back around
And help the next one in line
Always stay humble and kind.

The clear, simple message is, as you set out into the world, don’t let your aims and ambition blind you to the importance of character and service to others. It is a reminder to stay grounded in family and religion, live honestly, work hard, respect your elders, remain humble, and make kindness a habit. To cynics, this old-fashioned, heartfelt advice may seem nothing more than clichéd, cheap sentimentalism, but that perspective would say much more about the hollowness of cynics than about the eternal verities of the lyrics.

And the cynics are in the minority anyway. The song has struck a chord with parents, students, and others all over America. The music video has been viewed over 22 million times on YouTube, and nearly 27 million more times on McGraw’s Facebook page. A hardcover book edition of the song was released in time for graduation season, and the song is becoming a graduation ceremony favorite. In addition to the lyrics, illustrations, and an epilogue by Lori McKenna, the book features an introduction by McGraw, who pledged his book proceeds to the Neighbor's Keeper Fund of the Community Foundation of Middle Tennessee.

More significantly, the song has inspired a hashtag (#stayhumbleandkind) and a community at stayhumbleandkind.com, where people are challenged to create their own stories of kindness and are encouraged to share them on the site. It is becoming a movement. “The fact that Tim took this song that I saw as a prayer or a little list of things I wanted my kids to know and saw it as something bigger than that was amazing to me," explained the writer McKenna. “[H]e’s taken it to levels that I don’t have the ability to do.”

Bravo, then, for Tim McGraw, who recognized how desperately McKenna’s “prayer” needed to be disseminated. In a reality show-driven culture that rewards arrogance and boorishness with fame and fortune, the message of “Humble and Kind” is to stay focused on giving and gratitude. In a music industry that sells decadence and egotism, it is a quiet call to reject those worldly illusions. In a frat-boy campus environment rife with binge drinking and raging hormones, it is a challenge for young men and women, on their own for the first time, to maintain their self-respect and conduct themselves as gentlemen and ladies. It is a reminder to hold fast to the permanence and value of character, and to always stay humble and kind.