This Thanksgiving, Pass the Gratitude and Hold the Politics 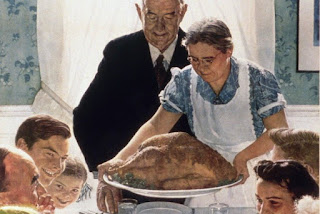 During a recent White House press briefing, Press Secretary Josh Earnest suggested that gun control would make a great topic of conversation for families gathered for dinner this Thanksgiving: “As people sitting around the Thanksgiving table talking about these issues, as they should and I’m sure they will all across the country, I hope that’s a question that will be raised and asked by members around the table.”
This is as bad a suggestion as President Barack Obama’s tweet just before Thanksgiving two years ago, when he was trying to sell Obamacare to the American public: “When your loved ones get together this holiday season, remember to talk to them about health insurance.”
Um, no. Regardless of your position on health care, gun control, or any other political hot topic du jour, Thanksgiving dinner is arguably the worst hour or two of any given year to try to engage in a serious political discussion with loved ones, some of whom might have traveled from afar and whom you don’t even see the entire rest of the year. Don’t spend those precious hours potentially rubbing them the wrong way because the government wants you to take that opportunity to evangelize to them about gun control.
The one topic of conversation guaranteed to divide us is politics. Even religion generally isn’t as contentious or as common a subject. But even if every single person at the holiday gathering agrees on a given political issue, this is not the appropriate time to discuss it. Thanksgiving should be for the personal, not the political.
The cast members of Saturday Night Live apparently agree with me. Last weekend they put on “A Thanksgiving Miracle” skit in which family members preparing to break bread begin to share what they’re each thankful for, but they quickly begin quarreling about immigration, police brutality, and the presidential election. “Thanksgiving can be hard,” a title card reads. “Everyone has different opinions and beliefs. But there’s one thing that unites us all…” That thing is Adele’s new hit single “Hello,” the playing of which causes the SNL family instantly to throw aside their differences and lip-sync in full Adele-video mode – wind-blown blonde hair, lacquered nails, and all.
I’m skeptical that even group karaoke to Adele’s music can bring all Americans together, but the one thing that definitely can and should unite us all on this and every Thanksgiving is simple gratitude. Americans in the 21st century are like the lottery jackpot winners of history. Even in its current precarious state, America and its citizens are blessed beyond all reckoning, and Thanksgiving is a day to be humbled with gratitude for the peace and prosperity that, by and large, we enjoy.
It shouldn’t even be necessary to say this, but considering the heightened political tension these days and the fact that our government is actually nudging us to obsess over a political agenda at the dinner table, perhaps it bears emphasizing: This holiday, set aside any discussion of gun control, health care, the presidential campaigns, Black Lives Matter, terrorism, immigration, and all the rest for another day, and focus on thankfulness.
If you must debate something, make it no more serious than whether the Bears will be able to take down the Packers that afternoon (they won’t). If you’re a high school or college student, resist the urge to share with everyone what you were taught about the evil Puritans waging genocide against the noble Native Americans. If you’re the family vegan, resist the temptation to lecture everyone at the table piling their plates with turkey breast that “Meat is murder.”
Instead, be grateful that you and your loved ones are sharing each other’s presence. Take turns around the table expressing something personal for which you are grateful. Cultivate a habit of gratitude year-round. It will inspire you to help others who are less fortunate, for gratitude is not only the greatest of virtues, wrote Cicero, “it is the parent of all the others.” You will be a happier, healthier, better person for it, and the world will be a better place.
And that’s good politics.
From Acculturated, 11/26/15
at 1:20:00 PM