War, Forgiveness, and Hope in ‘Beasts of No Nation’ 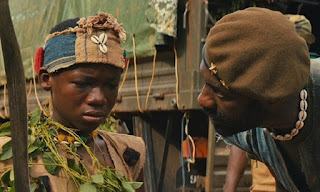 Despite all the recent talk in the news of the refugees from civil war-torn Syria, it’s easy to lose sight of the reality of war for those squeezed most helplessly in the vice of its implacable brutality: children. It sometimes takes art, not news reports, to convey the havoc that war can wreak on the stability of family, community, and faith, not to mention the innocence of childhood.
Last month Netflix premiered an extraordinary original film, Beasts of No Nation, from filmmaker Cary Joji Fukunaga and based on a book by young Nigerian novelist Uzodinma Iweala. It features stunning, Oscar-worthy performances by Abraham Attah as the preadolescent protagonist Agu, and by Idris Elba as a rebel warlord and the father figure to the boy soldiers in his charge. It also captures for an American audience a real-life tragedy that none of us can imagine: the horrific experiences of African child soldiers.
MILD SPOILERS AHEAD
When war comes to an unnamed West African village, Agu’s father, a local teacher, is forced to separate the family: the boy’s mother, sister, and baby brother are sent away to the city, while the males in the family, including Agu, stay behind to defend the village. “Whatever happens, Agu,” his father tells him, “it is God testing us. We have to stay strong.”
But Agu is tested beyond what any human being, much less a child, should ever have to face. He barely escapes the army’s massacre of the villagers and flees into the bush, where he is taken prisoner by a battalion of the rebel army. He is coerced into fighting alongside the rebels, led by the charismatic but ruthless Commandant, who initiates Agu by forcing him to butcher an unarmed prisoner. By that point, the young Agu’s innocence and childhood are casualties as well.
He befriends another boy whose own war trauma has rendered him mute. As the rebel army ravages the land – looting, raping, and killing – Agu longs to be reunited with his mother and the rest of his family. The carefree life he once led – grounded in family, school, and church – in a small and impoverished but joyous and God-fearing community is over. “Nothing is ever for sure,” Agu muses, “and everything is always changing.”
Now he marches with an artificial community of young rebel killers under a leader whose depravity knows no bounds. His mother’s last words to him were, “Pray to God every day.” But he fears that God hates him for the merciless violence in which he participates.
When the Commandant breaks away from the main rebel force to pursue his own ambitions, it leads to Agu being taken prisoner once again, this time by the United Nations armed forces. He and other boys are placed in a rehabilitation sanctuary for child soldiers. There, Agu ignores his counselor’s pleas to open up about his experiences. She assumes that his refusal to speak is because he is unable to express himself, “like a baby”: “But I am not like baby,” he thinks. “I am like old man, because I am fighting in war and she’s not even knowing what war is.”
In a heartbreaking short monologue, he finally tells her, “I saw terrible things. And I did terrible things… If I am telling you this, you will think that I am some sort of beast, or devil. And I am all these things,” he confesses. “But I am also having a mother, father, brother and sister once. They loved me.”
In other words, he had once been human, but the savagery of tribal war had reduced him to something less than that. Now, after the surreal nightmare of war, he must find his way back to his humanity. He must begin the process of recovering his childhood and his faith, of finding forgiveness not only for the ones who slaughtered his family, but self-forgiveness for the evil in which he himself participated. The movie ends as it begins: on the hopeful note of a group of children playing.
War is sometimes necessary but always ugly, and some innocents are always caught between irresistible forces. In the worst instances, communities are destroyed, families are ripped apart, and children are at best traumatized, at worst killed or enslaved. People in wartime are sometimes lifted up in acts of glory and heroism, and sometimes degraded by ruthlessness and evil. In the end, sometimes there is no way out except through forgiveness and hope. Few, if any, movies capture that quite as powerfully as Beasts of No Nation.
From Acculturated, 11/25/15
at 1:20:00 PM