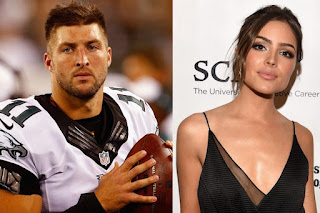 Over the Thanksgiving holiday, news broke that quarterback Tim Tebow and former Miss Universe Olivia Culpo, who had been dating since October, have gone their separate ways. Ordinarily, this would register as only a minor blip on the celebrity gossip Richter scale, except for one unusual detail that set the internet afire: apparently Culpo left Tebow because she was fed up with his unwavering vow to save himself sexually for marriage.
Tebow, as everyone who follows sports and/or pop culture knows, is one of the most outspoken, committed Christians in either arena. In fact, the 28-year-old is arguably more well-known for his steadfast faith than his accomplishments on the football field, at least since winning the Heisman Trophy as a college sophomore.
Olivia Culpo, apart from her pageant success, is known more recently as the former girlfriend of Nick Jonas of the Jonas Brothers, all of whom were outspoken, committed Christians themselves at the height of their fame. The boy band’s sexual restraint not only ran against the grain of pop star promiscuity, but they and their “purity rings” even made abstinence temporarily cool and inspired a trend.
But Nick Jonas was apparently unable to hold out against Culpo’s charms (in fairness, not many young men could). About losing his virginity, he told Wendy Williams, “As I grew up, I sort of figured out what was important to me and my own belief system.” Abstinence apparently didn’t make the cut.
But Tim Tebow continues to hold out, despite it reportedly costing him a relationship with someone whom many people would consider a hot catch.
Or perhaps it’s the other way around. Because despite news of the breakup inspiring a raft of crude jokes at Tebow’s expense – “For once, it's not Tebow who's having trouble scoring - it's his girlfriend,” the New York Daily News quipped in an article titled “Tim Tebow still can’t find the end zone as girlfriend Olivia Culpo breaks it off over lack of sex” – it is Culpo, not Tebow, who likely missed out on a great catch.
“He was really into her,” a source told the New York Daily News, but “she just can't deal with the sex thing. He's pretty adamant about it, I guess.” Indeed, and that makes him a rarity in today’s sex-saturated pop culture – such a rarity that it polarizes people into one of two teams: those who deride Tebow as a loser for not taking full advantage of the opportunity to, um, find the end zone with Miss Universe, and those who are impressed with his almost superhuman adherence to religious principle.
At Jezebel, for example, where Tebow is a favorite target of the angry bloggers because he’s a white Christian male and because his mother famously refused her doctor’s advice to abort him, they titled their article, with their usual boring profanity, “Miss Universe Allegedly Dumped Tim Tebow Because He Refused to Fuck.” It painted Culpo as a “woman who knows what she wants” and “doesn’t have to wait for anything.”
No doubt she is. But if indeed Tebow’s abstinence is indeed the reason for their breakup (E! Online claims to have been told by “an insider” that the split had nothing to do with it), it makes her look like a woman who didn’t recognize what a young man of exceptional character and personal strength Tebow is, and what a partner she could have had.
Peer and cultural expectations – not to mention hormones – place incredible pressure on young people to lose their virginity. A good-looking guy in the public eye and in the hyper-masculine world of pro sports, like Tebow, is under special scrutiny and presented with extraordinary temptation to cheat on his religious commitment. "Once you start seeing these girls around the NBA,” basketball star Magic Johnson once reportedly told a rookie, “you won't be thinking any of that Christian and God stuff.” As ESPN’s Jemele Hill put it back in 2009, Tebow “must spend a good bit of his day stiff-arming willing women as if they were SEC linebackers.” By contrast, former NBA titan Wilt Chamberlain boasted of sleeping with 20,000 women, and Magic Johnson reportedly had sex with 300-500 partners a year and threw orgies at his house. Johnson ended up contracting AIDS.
If Tim Tebow can stay strong and committed to his Christian principles in the face of this onslaught of temptation and the public derision that he often receives, then he’s a man who can be trusted to be faithful to his partner. That’s no small thing in today’s world, particularly for a handsome young man in the sexually charged world of celebrity. Not only that, but it points to his strength of character and his trustworthiness to act according to principle in every other aspect of his life.
And isn’t that worth waiting for?
From Acculturated, 12/4/15
at 1:27:00 AM