In Defense of Disney Princesses 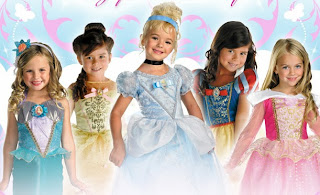 These days the Disney movie princesses, like Rodney Dangerfield, get no respect. Militant feminism has conditioned parents to reel in horror from the notion that their girls should aspire to be nothing more than fairy-tale damsels in distress, hoping for knights in shining armor to whisk them away from their Cinderella-like drudgery and live happily ever after in ball gowns at the royal castle. But this attitude stems from an unfortunate misperception about the Disney princesses, one that parents would do well to reconsider.

Upworthy posted an article last week about photographer Jaime Moore, who was searching for creative ways to take photos of her 5-year-old daughter Emma “but found most of the ideas were how to dress your little girl like a Disney princess.” Instead, Moore found real-life role models for her project. The result was, as Upworthy put it, “kick-ass” photos of Jane Goodall, Helen Keller, Amelia Earhart, Coco Chanel, and Susan B. Anthony side-by-side with shots of Moore’s daughter dressed and styled as each. Moore closed with, “Set aside the Barbie dolls and Disney princesses for just a moment, and let’s show our girls the real women they can be.”

As “kick-ass” as the photos are, the message frankly is dated. This isn’t the 1950s; American girls now grow up under the assumption that they can be whatever they aspire to. They don’t lack for role models in any profession one can name. Women today are CEOs, pro athletes, attorneys, astronauts, politicians, surgeons, construction workers, and possibly even POTUS in 2016. For decades even the much-maligned Barbie herself has had various professional personas.

Moore’s comment about the Disney princesses reflects our cultural confusion about them. They aren’t intended to be career role models. They are moral role models. Disney movies aren’t telling girls that they should limit their aspirations to becoming princesses (although young women sometimes do become one, so be ready); they are teaching them to adopt the values of Disney princesses: kindness (Snow White), compassion (Ariel), intelligence (Belle), humility (Cinderella), courage (Merida), and determination (Tiana), among others. These are worthy attributes for boys as well as girls, but the point is that Disney isn’t steering girls toward being future trophy wives – it’s promoting values that make you a decent person, regardless of your career or lack thereof.

Little girls aren’t absorbing this message from the movies consciously, of course; they’re just enjoying well-told, satisfying stories that feed their young fantasies. Girls like to fantasize about being beautiful princesses, just as boys pretend to be Vikings or superheroes (and a boy has even less chance of growing up to be one of those than a girl does of becoming a princess). There’s nothing wrong with that. Let kids be kids, and don’t impose your career expectations on them yet. No little girl wants to be Helen Keller or Jane Goodall for Halloween, just as no little boy wants to trick-or-treat as Louis Pasteur or Steve Jobs. That doesn’t mean they won’t grow up to change the world. The important thing is that they are being shown moral lessons.

“Disney only sells morally correct happy ever afters,” complains one critic. How is that a problem? Would it be better to sell immoral tragedies? There’s already an abundance of that to be found in reality television. Yes, the Disney princess message is a “morally correct” one – that every little girl can be a princess in the qualities and virtues that she embodies. Sadly, moral messages make many people today uncomfortable. But if more parents encouraged their daughters to emulate Rapunzel, Belle and Cinderella, perhaps those daughters will be less likely one day to emulate train wrecks like Miley Cyrus, Lindsey Lohan, and Kim Kardashian.