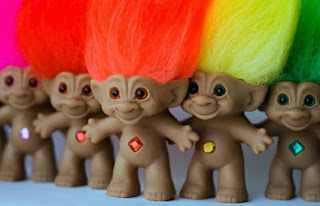 Recently an anonymous commenter responded to an Acculturated article I had written back in February entitled “Why Have Kids? They Make Life Meaningful.” The commenter stated, among other mean-spirited things, that “I hate kids. Always have. See humanity as a disease.” He (or she, but statistically speaking, it was most likely “he”) finished by saying that “women who birth children are dumb farm animals without exception.”

I always try to respond to Acculturated comments, which are almost invariably well-considered and -intended, but I didn’t waste time on this one. It was the very definition of trolling: irrational, hateful, and designed only to provoke and/or bully, not to contribute to a meaningful online conversation. Trolls don’t respond to reason; they seek to agitate, not debate. Responding would have served no purpose except to feed the troll’s perverse need to suck me into a time-wasting, enervating black hole from which even the light of reason cannot escape.

Such a comment may be rare on Acculturated, but the internet at large is hip-deep in trolls waging such (usually) anonymous, virtual guerrilla warfare. Political websites are particularly infested with them. I spend a great deal of time – too much – reading articles online, and have resolved recently not only to be more discriminating about that, but also to liberate myself from the negativity of reading article comments too, partly due to the high concentration of trolls spreading hate and ugliness for the pathetic satisfaction it gives them.

It’s easy to dismiss trolls as lonely losers typing away feverishly in their parents’ basement, but the disturbing fact is that they come in all shapes, sizes, colors, and occupations. “Most people who troll are people who are just like you and me, but just a bit more intense,” says Morin. I can’t agree that intensity is behind it. One can debate a topic very intensely without devolving into hateful goading and insults.

Apart from those who simply take pleasure in being mean, then, what motivates someone to take the time to seek out, say, a website of one’s opposite political persuasion with the purposeful intention of spewing ugliness and gleefully sowing discord in online conversations? Two words: anonymity and powerlessness, a volatile combination.

Internet anonymity empowers people who feel powerless and weak in their real lives. It provides them with a consequence-free cyber-bubble from which to spew their vitriol. Psychologists call this the “disinhibition effect,” in which “the frequency of self-interested unethical behavior increases among anonymous people.”

Even for those who use their real names online, the absence of face-to-face confrontation is still a reassuring measure of anonymity. In the real world, bullies have to at least be willing to face their victims down, which narrows their numbers considerably. And real-world bullies need either to be physically imposing enough to pick on people, or to have enough bully cohorts to gang up on their victims.

But the internet shelters bullies, so even 98-lb. weaklings can strut fearlessly and feel the rush of power that accompanies the unrestricted freedom to fire volleys of verbal, virtual hit-and-runs. So in that sense, trolls are indeed life losers, whether they’re actually inhabiting Mom and Dad’s basement or not.

When I say I’m weaning myself from reading internet comments, I’m not suggesting that we abandon cyberspace to the little cowards. Trolling can be reduced by requiring commenters to register on websites and to log in or connect through social media to comment. Moderating comments is another helpful safeguard. Removing the shield of anonymity entirely is problematic, because many polite and reasonable people may have legitimate cause to remain anonymous on certain sites.

Beyond that, one surefire tactic for the rest of us to use against internet insurgency is to refuse to feed the trolls – if they are denied the reaction they so desperately crave, most will wither and die.