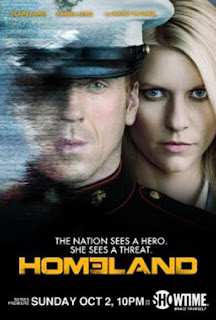 It’s been almost a year and a half since the long-running Fox TV series 24 ended. The counterterrorism action show featured Kiefer Sutherland as the self-sacrificing super-patriot Jack Bauer, who took down terrorists by any means necessary, including torture – a tactic which created no end of controversy and earned the show scorn from the Left as “right-wing porn.” Now creative alumni from 24 have created a new show with an admittedly compelling but decidedly more ambiguous take on what used to be called the “war on terror” (before the Obama administration changed it to “Overseas Contingency Operation” and then dropped a name for it altogether).
Homeland, which premiered two Sundays ago on Showtime, is based on Prisoners of War, an Israeli TV series about the reintegration of two soldiers held prisoner by the Syrians. It centers on a Marine named Brody (actor Damian Lewis) missing and presumed dead in since 2003, who is discovered alive and rescued during a -driven operation. Brody is welcomed home to suburban to a lot of self-congratulation and media fanfare – “a poster boy for the war,” as skeptical counterterrorism analyst Carrie (actress Claire Danes) calls him. Unknown to her superiors, Carrie received a tip from a high-level informant that an American prisoner of war has been "turned" traitor; she suspects it is Brody, and that he is a sleeper agent involved in an imminent terrorist attack. (Warning: possible SPOILERS ahead)

Brody, tortured both physically and psychologically, struggles to re-acclimate himself to his family and freedom. Carrie herself suffers from what she dismisses as a mere “mood disorder,” but she’s barely holding herself together with the aid of clandestine medication, and has been treading on thin ice lately with the brass, who want her to stop making waves. In her determination not to let another terror attack get past her, like the one that nearly derailed her career years before, Carrie decides to go with her instincts and run her own surveillance operation under the ’s radar. But she uncovers nothing substantial to give credence to her suspicions. Perhaps she’s only paranoid after all.

Or perhaps not. Brody is all tightly-coiled anger and anxiety, and tight-lipped about the darker details of his horrific experience, suggesting hidden layers beneath his crisp uniform and impenetrable public face. Not to mention the fact that he is chanting in Arabic on a makeshift prayer rug in the privacy of his garage – but is that evidence that he has turned, or is it residual Stockholm Syndrome? Carrie believes she has caught him giving off subtle coded messages to his partners-in-terror – or is it merely a nervous tic? Is he a traitor or an innocent target of her obsession with national security? The tension in these questions may be difficult to sustain over the course of an entire season, much less subsequent seasons, but so far – two episodes in – it is so successful that the viewer is left wanting more.
The exploration of this uncertainty seems to be the show’s point about a new era ten years after the 9/11 attacks. Howard Gordon, an executive producer of both 24 and Homeland, says that the former show reflected “an urgent, post-9/11 ethos,” but now?
Should we be afraid of the same things we were afraid of 10 years ago? The world is more complex, and our understanding of it is more nuanced. And there's a gray space of not knowing who the good guys and bad guys are.
Such comments send up a giant red flag for anyone concerned that yet another treatment of the Clash of Civilizations will be a disappointing exercise in moral equivalence. “Should we be afraid of the same things we were afraid of 10 years ago?” An odd question, considering that 1) the Islamic militants at war with us have not declared a cease-fire or surrender, 2) more terror attacks and plots have occurred or been thwarted on American soil during Obama’s presidency than in all the previous time since 2001, 3) we are still embroiled in two wars abroad, and 4) Iran is not only accelerating toward the acquisition of nuclear weapons, but also potentially planning to devastate America’s infrastructure with an attack. Not a good time to relax our guard and pretend that the Islamic threat has subsided, as Gordon seems to be suggesting.
“The world is more complex, and our understanding of it is more nuanced.” Translation: “’s not as single-minded and gung-ho anymore about taking down the enemy as it was under Bush immediately after 9/11.” Hollywood, never enthusiastic about the war on terror anyway (until bin Laden died on Obama’s watch; stay tuned for a film about Seal Team Six from The Hurt Locker filmmakers), often disdains “simplistic” depictions of right and wrong, of unconflicted heroism or unadulterated evil. Many filmmakers prefer to present the world in terms of, not black-and-white, but gray – “a gray space of not knowing who the good guys and bad guys are.” As actor Lewis says, Homeland is “asking provocative questions about the nature of good and evil.” Beware when gets “provocative” about the nature of good and evil; the moral waters often get muddied and the wrong messages get sent – in this instance, about a war in which we are still very deeply engaged.
Is that what’s happening with Homeland? Is the show playing out in the usual morally relativistic Hollywood fashion regarding the war on terror: blaming American foreign policy for Islamic rage, dismissing national security concerns as paranoia, depicting our military yet again as damaged victims (as in contemporary anti-war films like Home of the Brave, In the Valley of Elah, Brothers, and Stop-Loss)?
Some of the signs aren’t good: for example, the military figures in Homeland, Brody included, aren’t exactly upstanding role models, and Carrie’s invasive, quasi-legal surveillance could be seen as a condemnation of what some consider excesses of the Patriot Act. But thanks to tight, evocative writing and pitch-perfect acting from even the supporting actors like Mandy Patinkin as Carrie’s mentor, the first two episodes have so carefully treaded the minefield of such concerns, keeping the viewer off-balance, that it’s impossible to condemn it outright – or to stop watching. Like Brody’s guilt or innocence, it seems Homeland’s true colors will take time to emerge.