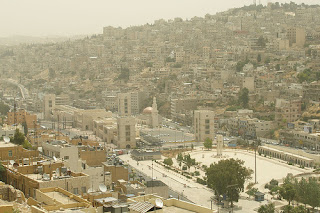 With a petition for Palestinian statehood presented before the United Nations last week, the issue of the disputed right to the land of Israel seems to many to be on the verge of an historic, if unsatisfying and controversial, resolution. But Dr. Arieh Eldad, a Member of Knesset and chairman of the Jewish nationalist Hatikva party, insists that the root of the issue is not territorial, and thus any peace plan based on the concept of dividing the land is destined for failure.
In his pamphlet titled simply “Jordan is Palestine,” Eldad writes
Dividing the west of the into two states – and a Palestinian state – has become the only political plan accepted for international and domestic (Israeli) discourse. This, despite dozens of failures in trying to implement it during the past ninety years. Every failed attempt has been accompanied by bloody conflict and/or war.
Recently Eldad – also chief medical officer and senior commander of the Israel Defense Forces Medical Corps and a Brigadier-General in the IDF (Reserves) – spoke at Temple Ner Maarav in Encino, northwest of , to clarify the truth and present his alternative plan. Also entitled “ is ,” his presentation put forth what he calls the “simple truth” that the Jews, and not the Arabs, have an historic right to the . “I’m all for ending the occupation,” he said. “We must end the occupation. Of course, I’m referring to the Muslim occupation of the , starting in the seventh century.”


So yes, there is certainly a territorial component to the problem, Eldad acknowledges. But, he explained, falling back on a medical analogy that reflects his profession, “We have misdiagnosed the conflict. It is a religious war. It’s a clash of ideologies. It’s not a territorial conflict.”
Eldad gives an example of this clash of ideologies in a FrontPage Magazine contribution entitled “A Story of How Deep the Palestinians Have Sunk into the Moral Abyss.” A surgeon specializing in the treatment of burn victims, Eldad was instrumental in establishing the Israeli National Skin Bank in , the largest skin bank in the world, which stores skin for everyday needs as well as for wartime or mass casualty situations. He relates the true story of a Palestinian woman given medical attention there after her own family burned her for some transgression of “honor”:
One day she was caught at a border crossing wearing a suicide belt. She meant to explode herself in the outpatient clinic of the hospital where they saved her life. It seems that her family promised her that if she did that, they would forgive her.
This is only one example of the war between Jews and Muslims in the . It is not a territorial conflict. This is a civilizational conflict, or rather a war between civilization & barbarism.
In his presentation last week he offered another example of the religious root of the conflict. Many thousands of Palestinian teachers, he said, work in the education system of UNRWA (the United Nations Relief and Works Agency for Palestinian Refugees),
and the only thing [the students] learn is to hate the , to hate . If you open a math book of the fourth grade of a Palestinian school, you learn that “if a shahid, a martyr, on a bus can kill fifteen Jews, how many Jews can be killed by three martyrs on a train?” This is the kind of mathematics they learn in school.
Eldad’s solution?
Any alternative plan should be based on the fact that the Palestinians have their own state already in , a kingdom – in which the Palestinians are at least 75% of the residents – created after the British Mandatory was divided into two. The plan should focus on resolving the regional solution by settling the Arab refugees in and other Arab countries that absorbed Palestinian refugees after the War of Independence in 1948…
Israel would exercise sovereignty over all territory west of the Jordan, receive exclusive authority over security issues in all areas of sovereignty, since Israel could never accept the existence of an army from another country west of the Jordan, with airspace sovereignty and full control of external borders…
The Plan " is " is the only approach that can handle conflict without endangering the very existence of the State of Israel.
There are four major elements of his plan: 1) recognition of Jordan as a Palestinian country; 2) the closure of UNRWA and the creation of a plan for the settlement of Arab refugees in Jordan, under the auspices of the UN High Commissioner for Refugees (UNHCR), which has a track record of successfully resettling tens of millions of refugees around the world; 3) Israeli and international guarantees of a continued Hashemite rule in Jordan, and 4) the application of Israeli law in Judea and Samaria.
If we remember that the main driving force of the Arabs in this conflict is Islam, the border will not solve the conflict. But this plan will create a national state for Palestinians, who will be able to fulfill at least some national desires, and it will be a state whose very existence does not endanger . The border will establish a clearly defensible border.
In addition to offering these recommendations, Eldad also pulled no punches last week when offering his opinion of ’s Benjamin Netanyahu. Contrary to the image of the strong, statesmanlike leader the Prime Minister has presented to many Americans, Eldad says that after Netanyahu’s humiliating treatment at the hands of Obama earlier this year, in which the President simply left the Prime Minister to mull over his demands while Obama abandoned him for dinner, Netanyahu exhibited exactly the same characteristics as a soldier afflicted with Post-Traumatic Stress Disorder. Eldad decried Netanyahu’s willingness to bend under “extreme pressure” from the White House; while acknowledging that bones were not his area of medical expertise, Eldad nonetheless recommended that Netanyahu get a “spine transplant” and answer the unilateral Palestinian declaration of statehood with unilateral annexation of and .
This is typical of Eldad’s bold, politically incorrect assertions. A year ago he called for the assassination of Iranian President Mahmoud Ahmadinejad, comparing him to Hitler. And unlike other politicians, Eldad does not sugarcoat the future. Because the Israeli-Arab conflict is religious and not territorial, he claims, there will not be peace in the . “I don’t promise peace. I promise containment of the conflict.” Anti-jihad blogger Pamela Geller called Eldad her candidate for Prime Minister of Israel: “Eldad gets it. He is unbowed, unafraid and without corruption.”