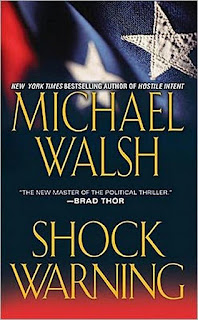 “Serious” novels about 9/11 and Islamic terrorism tend to suffer from navel-gazing guilt and moral equivalence. too often blames , the , and capitalism for Islamic rage. The thriller novel seems to be the last fictional arena in which writers like Brad Thor, Daniel Silva, Vince Flynn, and now Michael Walsh are allowed to pit good guys against politically incorrect, yet real-world, adversaries like (among others) Muslim militants.
Walsh is a novelist, music critic, screenwriter, and media critic. Until recently he was also the editor of Andrew Breitbart’s BigJournalism.com. A former American Book Award winner for his novel And All the Saints, Walsh recently undertook a spy thriller series featuring an NSA super-agent code-named Devlin, who takes on ’s enemies foreign and domestic. The series began with 2009’s Hostile Intent, followed by Early Warning last year, and now the just-released Shock Warning, which takes Devlin from a devastating biological attack in California to an apocalyptic confrontation in Iran. Two more books in the bestselling series are still slated to appear.
As if all that doesn’t keep him busy enough, Walsh writes political commentary in a twice-weekly column for the New York Post and also for the National Review under both his own name and the alter ego David Kahane. Kahane’s outstanding Rules for Radical Conservatives: Beating the Left at its Own Game to Take Back America came out last year (FrontPage editor Jamie Glazov interviewed Walsh about it here). Somehow I managed to catch up with Walsh for a few questions in a brief interim when he wasn’t writing.

Mark Tapson: Devlin, the shadowy hero of your thriller series, is the kind of warrior that, as Jack Nicholson’s character said in A Few Good Men, we need “on that wall,” defending our freedoms. What do you want to say, in a character like Devlin, about heroism today?

Michael Walsh: That it largely goes on under the radar. Men – and women – like Devlin operate in the shadows, but they are the tip of the spear in war-fighting today. It's highly unlikely that we'll see huge armies battling à la World War II. Instead, combat is gradually returning to the hand-to-hand level, as operatives, assisted by technology, wage their duels in the dark or in cyberspace.
MT: Devlin’s actually an operative for branch of the National Security Agency that few people have ever heard of. Tell us about that.
MW: The Central Security Service is part of the National Security Agency. In its own words,
The Central Security Service () provides timely and accurate cryptologic support, knowledge, and assistance to the military cryptologic community. It promotes full partnership between the NSA and the cryptologic elements of the Armed Forces, and teams with senior military and civilian leaders to address and act on critical military-related issues in support of national and tactical intelligence objectives. coordinates and develops policy and guidance on the Signals Intelligence and Information Assurance missions of NSA/ to ensure military integration.
That's one way to look at it. In fact, the was originally intended to be a “fourth branch” of the armed services when it was created by an executive order by President Nixon, and while that goal was frustrated by the other services, the is extremely potent. For obvious reasons, it prizes its anonymity and does all of its work in the dark.
MT: Any idea how the real operatives of the Central Security Service feel about how Devlin represents them?
MW: If I did, I couldn't tell you! Seriously, the makes the look like a leaky vessel about to sink.
MT: Devlin is up against ruthless German billionaire Emanual Skorzeny, who has made it his personal mission to destroy Western civilization as we know it. Dare I assume that your inspiration for this character is Hungarian billionaire George Soros? And how about other characters, like President Jeb Tyler – how much inspiration do you draw from the real political figures that you write about in the Post or National Review?
MW: Re Skorzeny, any similarity to persons living or dead is entirely coincidental, but you are free to use your imagination. Jeb Tyler might have John Edwards' hair, but he's far cannier. In general, it's easier and more effective to create entirely fictional characters who are believable than to write some kind of roman-à-clef.
MT: Thriller writers of a conservative bent seem to be getting a foothold in : both Vince Flynn and Brad Thor have finally made movie deals to bring their heroes to the big screen. Anything in the offing yet for a Devlin movie?
MW: We are developing a script now and are currently in talks with several major producers. Hope to have an announcement in the next few months.
MT: That’s good news! Let’s switch gears. Through your alter ego David Kahane in Rules for Radical Conservatives, you urged the Right to borrow from the Left’s playbook to wage political warfare. Have you seen that advice being taken to heart more in the last year? Do you think conservatives are “getting it” more and beginning to beat the Left at its own game, or are we still playing by the Marquess of Queensbury rules?
MW: They don't call the Republicans the Stupid Party for nothing, but those outside the party's hierarchy are finally starting to get it. “By any means necessary” is the left's motto. They never stop, they never sleep, they never give up. And unless the right is prepared to engage them on their own terms and with their own weapons, it's going to continue to lose both the political and the cultural wars.
The irony is that the left is largely a bunch of paper tigers, wearing their bogus cloak of “morality” as a kind of Siegfried's Tarnhelm, thinking that others can't see through it. Hit back and they flee – they're only dangerous when your back is turned. Which is why eternal vigilance, etc...
MT: Besides the further adventures of Devlin and a prolific stream of political commentary, what else is on the horizon from Michael Walsh? How about a followup book from David Kahane?
MW: Kahane has his hands full with his regular National Review column, but I wouldn't be entirely surprised to see something new from him before the next election.