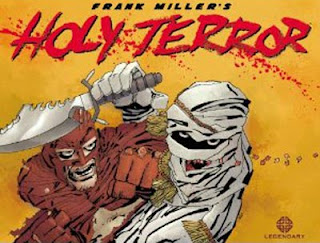 In an interview a month ago on FrontPage, cartoonist and FrontPage contributing artist Bosch Fawstin observed that “comics have been as truthless and as gutless as any corner of pop culture about Islam and Jihad since 9/11.” After dismissing several comic books that promoted appeasement toward the threat of global jihad, Fawstin, whose own work fearlessly confronts that threat, concluded with a contrasting example:
And finally, there’s Frank Miller’s Holy Terror, originally a Batman vs. al Qaeda story, which appears to take on the enemy in a more direct way than we’ve seen in comics so far, outside of my own work. I’m curious to see what kind of effect Miller’s book will have, if it will inspire more work that takes on this enemy.
Released two weeks after that interview, Miller’s 120-page graphic novel Holy Terror so far seems to have prompted more indignation than inspiration. The English-language website The National, for example, based in the United Arab Emirates, reports that some critics are denouncing the book as “Islamophobic” – and then proceeds to provide those critics with a forum in which to slam Holy Terror unchallenged by an opposing point of view.


Miller is one of the most influential and well-known cartoonists alive. His work includes The Dark Knight Returns and the graphic novels adapted to film, 300 and Sin City. As Fawstin noted above, Holy Terror was originally envisioned as a Batman tale, but after the 9/11 attacks it eventually morphed into a tale featuring a hero called The Fixer, who sets out to stop an Al Qaeda plot in a fictional version of New York City. In the process, the hero unapologetically proceeds to lay waste to the enemy.
Depicting Muslim terrorists as villains doesn’t sit well with their sympathizers, who disapprove of the lack of nuance in Holy Terror’s stark drama of good conquering evil.
“There is nothing subtle about Frank Miller's newest graphic novel,” The National article asserts:
The book opens with the quote: “If you meet the infidel, kill the infidel,” which Mr Miller attributes to the Prophet. From there the jingoism, violence and Islamophobia take off.
The National is trying to imply here that Miller’s quote attributed to “the Prophet,” meaning Islam’s founder Mohammed, is incorrect. Imprecise it may be, but what The National is glossing over is that the quote’s sentiment, the imperative to kill infidels, is a dominant theme of the Koran, in which variations of the quote abound. Acknowledging this, however, would take some of the sting out of the charge of Islamophobia, which is the stealth jihadists’ most potent weapon in their crusade to criminalize any criticism of Islam.
Nihad Awad, executive director of the Muslim Brotherhood-linked CAIR, the Council on American-Islamic Relations, described Miller’s book as “shameful”:
We are witnessing a growing industry of information and fear-mongering, and this work fits in the center… It's unfortunate that Islamophobia is becoming mainstream.
What’s unfortunate is that the cynical and manufactured concept of Islamophobia is becoming mainstream, thanks to the victimization card obsessively and successfully played by such Brotherhood offshoots as .
On the fifth anniversary of the 9/11 attacks, Miller elaborated about the impact that that morning in 2001 had on him and on his art. He expressed a newly awakened patriotism:
Then came that sunny September morning when airplanes crashed into towers a very few miles from my home and thousands of my neighbors were ruthlessly incinerated — reduced to ash. Now, I draw and write comic books. One thing my job involves is making up bad guys. Imagining human villainy in all its forms. Now the real thing had shown up. The real thing murdered my neighbors. In my city. In my country...
For the first time in my life, I know how it feels to face an existential menace. They want us to die. All of a sudden I realize what my parents were talking about all those years.
Patriotism, I now believe, isn't some sentimental, old conceit. It's self- preservation. I believe patriotism is central to a nation's survival.
The National article dismisses this as “jingoism” and complains of Holy Terror’s unflattering portrayal of Muslims and Arabs (neglecting to note that it actually presents an unflattering portrayal of Muslim terrorists). It quotes Jack Shaheen, a professor of mass communications at Southern Illinois University, as saying that such an attack is common in post-9/11 media, and that the book deserves the attention of “rights groups.”
What the article omits is that Jack Shaheen is a pro-Palestinian apologist who has built a career on judging ’s purported anti-Arab racism and discrimination. In his books such as Reel Bad Arabs: How Hollywood Vilifies a People, he has scoured nearly 1000 movies for possible evidence of the stereotyping of Arabs and Muslims. Of course, striving for a balanced depiction is not the aim; his real goal, like ’s, seems to be to ensure that no media depictions of Muslim terrorists are allowed, and that no connection is made between Islam and terrorism, despite the mountain of real-world evidence to the contrary.
Miller is not fooled and is willing to punch back hard, in the best way he knows how – through his artwork. He defended Holy Terror in a post on his website a month ago, calling it propaganda, but in a “virtuous,” patriotic sense, like Thomas Paine, and giving vent to his justifiable anger toward the 9/11 hijackers:

Three thousand of my neighbours were murdered. My country was, utterly unprovoked, savagely attacked. I wish all those responsible for the atrocity of September 11 to burn in hell. I'm too old to serve my country in any other way. Otherwise, I'd gladly be pulling the trigger myself.