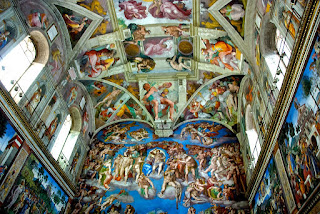 Universities have been ceding ground to anti-Western activists for decades now (remember Jesse Jackson leading chants of “Hey ho, hey ho, Western civ has got to go” at Stanford back in the ‘80s?). So it should come as no surprise that Yale recently announced it would grant yet another concession to multiculturalist students who demand that diversity of skin color replace the oppressiveness and irrelevance of Dead White Males: this spring will see the end of one of the school’s previously most popular classes, a survey course called “Introduction to Art History: Renaissance to the Present."
According to the Yale Daily News blog, in its final iteration the course will shift from transmitting to students a greater appreciation of their cultural heritage, to a more “woke” focus on subverting the canon of Western art itself. The course’s instructor, art history department chair Tim Barringer, has stated that the class will still cover Western art chronologically from 1300 to the present, but he intends to emphasize that other regions, genres and traditions are as “equally deserving of study” as Western art, because according it any special reverence is “problematic.”

As we are all reminded daily now in every cultural arena from academia to Hollywood, anything Western is “problematic” (to put it politely) because multiculturalist doctrine deems that all cultures must be revered equally – except for Western culture which, because of its association with the toxic privilege of “whiteness,” must be denigrated, deconstructed, and dismantled to heal the nonwhite victims of its oppression and exploitation. Thus, we must be careful not to elevate the great works of the greatest artists in world history over other, “equally deserving” genres and traditions.

In a syllabus note to potential students, Barringer wrote that the emphasis would be on the relationship between European art and other world traditions. That is a fair topic for study, considering that Western artists have occasionally been influenced by other traditions: Picasso and African masks, for example (although such influence now would be devalued as “cultural appropriation,” another racist concept concocted by the postmodern and/or Marxist left). But the class also, according to Barringer, will consider art in relation to – wait for it – “questions of gender, class and ‘race’” and will discuss its relationship to Western capitalism. In other words, immersing ourselves in the transcendence and beauty that literally define great art and touch our common humanity must take a back seat to imposing our earthbound interpretations of how art divides us. Climate change also will be a “key theme.” Of course it will, because all intellectual streams now must feed into the river of today’s acceptable groupthink.

The Yale Daily News also reports that Barringer said he will invite students to write an essay nominating a work of art that has been left out of the course’s curriculum or its textbook. “I’m really looking forward to seeing what works the students come up with to counteract or undermine my own narratives,” he wrote. Newsflash, professor: your job is to educate and open the minds of your students, not see what these kids “come up with” to undermine your “narratives.” If they’re coming to school to lecture you and delegitimize your expertise, then what is the point of your job? What is the point of an art history department if art history can be wiped out or rewritten to suit and validate the gender- and race-obsessed whims of youth? Indeed, what is the point of a university anymore if it only exists to conform to the arrogant demands of children drunk with the power of their own dogmatic wokeness?

This change in the History of Art Department follows the Yale English Department’s decision in 2017 to “decolonize” its degree requirements after students presented a petition demanding that a survey course called “Major English Poets be abolished, and that the pre-1800/1900 requirements be refocused to deliberately include literatures relating to gender, race, sexuality, ableism, and ethnicity.” Yale caved then as well, making the course introducing English majors to such luminaries as Shakespeare, Chaucer, Milton, Spenser, Wordsworth, and Eliot “optional.” Meanwhile students can choose from such other options as “Black and Indigenous Ecologies,” “The Politics of Museums,” and “U.S. Afro-Latinx Literatures.”

Like far too many other universities, Yale quite simply has given students who have traded any sense of intellectual humility for belligerent activism too much power to determine the direction of their own edification. As the Yale Daily News notes, the art history major has adapted to changes “suggested” by students pushing to increase minority and female representation. The Director of Undergraduate Studies Marisa Bass noted, for example, that students have prompted the creation of art history courses like “Global Decorative Arts” and “The Politics of Representation.” She didn’t say whether there would be room in one of those courses for a truly notable “global decorative art” such as the breathtaking genius of Michelangelo’s Sistine Chapel paintings (pictured above). Presumably, that would be “problematic” because Michelangelo is not representative of the correct skin color and genitalia that some students have declared must be prioritized.

There is nothing wrong with a history of world art survey course that examines art from all over the world. But the de-emphasis of Western art at a major university in a course whose time frame begins with the European Renaissance, and the administrative kowtowing to a very vocal minority of politicized students, is an intentional devaluation of our own civilizational achievements and does a disservice to students who need to be roused from the anti-Western indoctrination they are subjected to now from kindergarten onward. Teaching that our own culture has a “problematic” history while uncritically revering every other tradition is anti-intellectual, bigoted, and self-loathing. And downgrading our appreciation for and comprehension of great art to examining it in terms of its racial and class dynamics is reductionist and divisive.

It's time for our universities to help make Western civilization great again.