There is No Fun in Progressivism 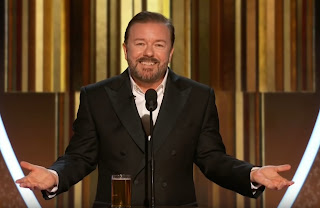 “There is no fun in Islam,” once declared the Ayatollah Khomenei, whose stern visage glowered down from posters plastered all over Iran after the 1979 revolution, as if daring anyone to crack a joke. The same could be said for Progressivism which, like Islamic fundamentalism, is a totalitarian ideology, and today’s Democrats, like the Iranian mullahs, simply can’t take a joke.
They can’t afford to, since successful totalitarianism depends on the complete control of every aspect of the population’s lives, especially thought control. The totalitarian state maintains that control through fear and division, and people who feel comfortable enough to ridicule the regime clearly are not sufficiently afraid or divided. The greatest enemy of authority, the philosopher Hannah Arendt wrote, is contempt, and the surest way to undermine it is laughter. Humor unapproved by the state – particularly humor aimed at the state – is an ominous sign that the regime’s death grip on the populace is slipping.
There is a scene from the brilliant 2007 German movie The Lives of Others (if you haven’t seen it, stop reading this now and go watch it), set in East Germany prior to the fall of the Berlin wall, which captures not only the existential terror of life in a totalitarian society, but the state’s vulnerability to mockery. In one chilling scene from the film, a Party official overhears an oblivious young soldier beginning to tell friends a joke at the expense of the Party Chairman. When he realizes a Party superior is eavesdropping, the soldier blanches in fear, but the official feigns amusement and encourages him to finish the joke. The punch line ridicules not only the Chairman but the rigid oppression of the system itself. The official then sternly demands to know the soldier’s name and department, warning him, “I don’t have to tell you what this means for your career. You were deriding the Party. That’s incitement, and likely just the tip of the iceberg. I will report this to the Minister.” Mockery endangered the Party as surely as armed insurrection – perhaps even more so, because a revolution can be crushed by military might, but ridicule is a more insidious and elusive threat.
“Ridicule is man’s most potent weapon,” states Rule #5 of community organizer Saul Alinsky’s infamous, ingenious Rules for Radicals, which the Machiavellian strategist dedicated to Lucifer, the ultimate radical. “There is no defense. It’s irrational. It’s infuriating.” The left has mastered the implementation of Alinsky’s rules for decades, and have taken control of the entertainment industry in which they wield derision of their political enemies like a broadsword. The entire late-night talk show scene, to cite just one arena, has been commandeered by so-called comedians devoted to progressive propaganda and attacks on conservatives. But the left is unaccustomed to having the tables turned. They’re utterly unprepared to be the butt of jokes.
Comedian Ricky Gervais, for example, despite being a progressive atheist himself, unloaded a brutal takedown of his privileged celebrity audience as host of last week’s Golden Globes Awards program: “You say you’re ‘woke,’ but the companies you work for: Apple, Amazon, Disney… if ISIS started a streaming service you’d call your agent, wouldn’t you?” He slammed them for their friendship with Jeffrey Epstein, the well-connected, suicided trafficker of underage girls, and told the increasingly uncomfortable stars that they “know nothing about the real world – most of you spent less time in school than Greta Thunberg.” He warned them not to get political in their acceptance speeches, because “no one cares about your views on politics or culture.”

Gervais’ no-holds-barred monologue went viral among cheering conservatives in the flyover states that Hollywood holds in such open contempt, but showbiz suckups were stung by his bullseyes. The Los Angeles Times criticized “the smirking master of ceremonies” for “taunt[ing] the room for trying to use their influence to change things for the better.” Vanity Fair writer Mark Harris dismissed Gervais’ jokes as “right-wing talking points” – as if the entire entertainment field doesn’t push left-wing talking points nonstop.
In another recent example of progressive humorlessness, CNN reporter Donie O'Sullivan whined that the right-leaning Babylon Bee satire site gets more traffic for one article than his fake news network and The New York Times get weekly. He tried to diminish the Bee’s influence and insult its audience by claiming it is a fake news site spreading disinformation (you know, like CNN or the NY Times). "A lot of people sharing this 'satirical' story on Facebook don't know it is satire," O'Sullivan wrote. Of course they do. O’Sullivan, who had no problem sharing articles from the left-leaning satire site The Onion, simply resented being the target of the Bee’s satirical scalpel and wanted to smear the site as fake news. No one bought it, and O’Sullivan was skewered mercilessly on social media for his humorless partisanship.
The left has always embraced comedy that desecrates “bourgeois” values, but it has become increasingly disapproving of politically incorrect humor that desecrates the left’s own sacred cows. Comedians like Jerry Seinfeld and Chris Rock have been complaining for a few years now that young people’s sense of humor has dried up on college campuses thanks to the PC obsession with sensitivity toward approved minority victim categories. Comedian Dave Chappelle, for example, was excoriated by the left for his very un-PC recent Netflix special “Sticks & Stones,” in which he pointed out, for example, that Hollywood’s one unspoken rule is “Never upset ‘the alphabet people’” – the bullying LGBT lobby. Salon called Chappelle’s new act part of our era of “nonchalant cruelty” ushered in by President Trump and his supporters. Salon considered it cruel because Chappelle’s jokes made the totalitarian left feel uncomfortable and exposed. Would Salon equally condemn as cruelty the mean-spirited comedy directed daily in showbiz at approved targets like Trump or his supporters or white people or Christians? Never.
One of the principal reasons the left is so triggered by President Donald Trump is that when it comes to being mocked by the left, he gives better than he gets. Indeed, that’s a large part of the reason he was elected: he gets in the gutter with his enemies, fights back, and wins. He has no compunctions about publicly ridiculing his opponents, going so far as to give them degrading nicknames which have caught on in the popular culture, at least among conservatives: Elizabeth “Pocahontas” Warren, Adam “Pencil Neck” Schiff, Pete “Alfred E. Neuman” Buttigieg, and many more. Democrats have never had to deal with Alinsky tactics from a conservative politician before, much less a president. It leaves them infuriated and defenseless, just as Saul Alinsky noted it would. You can see it in the unhinged, impotent anger of pompous celebrities who rage at Trump on social media, which just makes them look more ridiculous.
Democrats are not currently in political power, at least in the White House, but they have held the reins of cultural power for fifty years. Under President Trump, however, leftists feel that power slipping from their grasp as the right becomes more empowered to mock them. Totalitarianism, like comedy, is serious business; but unlike comedy, totalitarianism doesn’t work if everyone’s laughing.
From FrontPage Mag, 1/14/20
at 11:05:00 PM