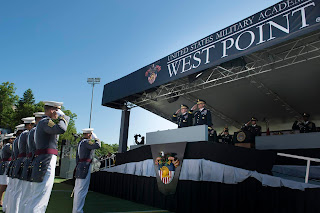 If you are a good, committed cultural Marxist and your mission is to help dismantle the cultural, economic, and power structures in the capitalist West from within, how do you undertake such a grand task? How do you subvert an entire civilization? You undermine its foundations, and the most basic building block of all is the nuclear family. To deconstruct the family successfully, you must subvert masculinity, because masculinity is the warrior spirit of that nuclear family. To emasculate a civilization, you indoctrinate its youth to believe that the natural traits typically associated with masculinity – such as aggression, competitiveness, and emotional self-control – are poisonous to society and even to boys and men themselves. You convince men – especially society’s warriors – to reject their very nature altogether.
This January, cadets at West Point, the United States Military Academy, were required to attend educational events for “Honorable Living Day,” the academy’s third such day hosted during the short tenure of Superintendent Lt. Gen. Darryl A. Williams. The first was held last February and focused on eliminating sexual assault and harassment at the academy, which has been co-ed since 1976. The second, held last semester, called upon cadets, staff and faculty to improve the culture in order to combat sexual assault further.
At this most recent Honorable Living Day, the goal was to “expand the discussion beyond sexual assault and talk about how all aspects of the community can come together and promote an atmosphere of honorable living to include diversity, inclusion and acceptance of people from differing backgrounds, races and genders.” Lt. Gen. Williams described the curriculum as being “connected” to improving combat readiness.
Eradicating any sexual assaults or harassment at West Point is a worthy goal. They shouldn’t be tolerated in any work or study environment. Encouraging cadets to live with personal integrity and to treat others according to the content of their character and not the color of their skin are also vital aims. But if reports from several male West Point cadets are true, there appears to be more going on in this past Honorable Living Day than meets the eye. Breitbart News reported that it received comments from some cadets, on condition of anonymity, complaining that the program went beyond merely discouraging sexual harassment. As one cadet put it: “I’m being taught how not to be a man.”
The day’s schedule included discussion groups led by upper-class cadets who referred to “toxic masculinity,” which is the notion, rapidly becoming a household phrase, that our traditional understanding of masculinity is a sexist, violent social construct that is harmful to men themselves as well as to others, and must be acculturated out of existence. Those who push this concept insist that the label does not mean that masculinity itself is toxic, but in fact that is exactly what they mean, because they never concede that there are any positive characteristics of masculinity, and their only solution for it is to replace it with characteristics stereotypically attributed to women: empathetic, emotionally open, and conciliatory. The whole aim of indoctrinating young men about their “toxic masculinity” is to convince them that their very nature is problematic for society and therefore they must act more feminine (meanwhile, our culture pushes women to adopt all the character traits of the most “toxic” men: aggression, hyper-competitiveness, crudity, and promiscuity).

West Point cadets were required to view Miss Representation and The Mask You Live In, two documentary films produced by Jennifer Siebel Newsom, the wife of Gavin Newsom, a California Governor so leftist he makes former Governor Jerry “Moonbeam” Brown look like former Governor Ronald Reagan. I have seen both these films.

Miss Representation examines “the ways in which mainstream media and culture contribute to the underrepresentation of women in positions of power and influence,” according to its website. It features commentary from such experts on masculinity as Cory “Spartacus” Booker, Nancy Pelosi, Katie Couric, Jane Fonda, Rachel Maddow, Rosie O’Donnell, and Gloria Steinem. Needless to say, these far-left ideologues have no inspirational insights to offer West Point’s male cadets (or the female cadets, for that matter).

The Mask You Live In focuses on the false “masks” of masculinity that boys and young men are pressured to wear in order to be considered men. Masculinity is presented as emotionally repressive. “We’ve constructed an idea of masculinity in the United States that doesn’t give young boys a way to feel secure in their masculinity, some make them go prove it all the time,” declares Stony Brook University professor Michael Kimmel, a prominent male feminist, in the film. There is absolutely no discussion of traditional masculinity as a positive force.

“Masculinity is not organic,” claims Occidental University professor Caroline Heldman in The Mask You Live In. “It’s reactive. It’s not something that just develops. It’s a rejection of everything that is feminine… through our popular culture, through our parenting styles, through our educational style, and through assumptions of natural manhood and maleness.” In other words, femininity is the baseline nature of humanity, and masculinity exists only in opposition to it, like darkness exists only in opposition to light. It is an unnatural, false social construction that is oppressive and damaging.

Afterward, Breitbart News was told, cadets attended workshops in which they were questioned about the films’ content. They were also addressed by featured speaker Bruce Stewart, a self-proclaimed “leading thought leader in the field of inclusive diversity,” who told them, “This whole thing around sexual harassment, sexual assault, discriminating and saying racist things has got to stop.” Below are a few other activities presented in the day’s curriculum:

Session 1 (gender-based Discussion):
Live Honorably Lunch:
Session 2 (Role Play Scenario Development)
According to the complaints Breitbart News received, Honorable Living Day didn’t have quite the effect it should have. “I’m going to quit West Point. It’s no longer teaching me to be a leader of men. It’s teaching me how to be a victim,” said one cadet. “I’m being taught how not to be a man,” another added. “The real bias we need to talk about [is] why it’s scandalous to be conservative in a professional environment but ‘brave’ to follow the crowd and be liberal,” yet another cadet wrote. A fourth reported that “The guest speaker had us all make a black power sign and yell, ‘Fight the power!'”

“Fight the power” is, of course, a call to revolution against society’s purportedly oppressive power structures. What does that have to do with living honorably, eradicating sexual harassment or improving combat readiness? The answer is: nothing. It is an act of subversion, pure and simple. Asked about the Black Power salute, West Point responded to Breitbart News that it was unaware of any speaker encouraging it.
The stated mission of West Point is to produce graduates who are “leaders of character committed to the values of Duty, Honor, Country.” God knows we need such leaders today, but you produce them – among the male cadets, anyway – by empowering their masculinity, not vilifying it, and channeling it toward virtuous, honorable ends. You don’t produce them through propagandistic, feminist-driven documentaries that make young men feel devalued and dishonorable, through role-playing scenarios concocted by social justice academics, through deconstructing and demonizing “gender norms,” or through racially-charged revolutionary chants led by diversity “thought leaders.”
From FrontPage Mag, 2/9/20
at 9:04:00 PM