What Celebrities Can Actually DO About Terrorism 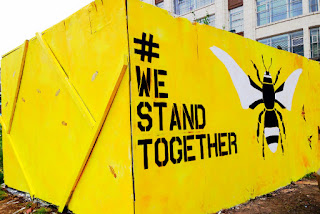 In the wake of the terrorist attack after Monday’s Ariana Grande show in Manchester, England, which killed almost two dozen people, celebrities from Katy Perry to Cher to Ryan Seacrest to Ariel Winter all took to social media to express their horror and condolences. Nearly every tweet was some variation of “sending thoughts and prayers” to those affected by the bombing. It’s the same after every such attack. There is certainly nothing wrong with such sincere, well-meaning sentiments, but they are ultimately impotent and reactive rather than proactive. Isn’t there something celebrities – the most influential people on the planet – can do about terrorism apart from simply following up with a sympathy note and a hashtag?
Fame is the biggest megaphone in the world. A superstar like Kim Kardashian has the virtual ear of over 50 million Twitter followers – twice that on Instagram. The worldwide influence of celebrities is incalculable, and immeasurably greater than that of any politician (by contrast, President Trump, infamous for his Twitter activity, has “only” about 18 million followers). If any segment of society is well-positioned not only to spread awareness but to inspire world-changing action, it is celebrities.
So instead of spouting embarrassingly frothy pleas for the world to “just unite and love on each other,” as Katy Perry did in a radio interview yesterday, or engaging in navel-gazing and self-loathing, as Queen guitarist Brian May suggested we do to figure out “why the world hates us so much,” here is what stars can actually do, short of taking up arms and running off to Syria, to make a difference in what used to be called the War on Terror.
First and foremost, they must dare to buck political correctness and start publicly acknowledging that Islamic fundamentalists have declared war on us whether or not we care to admit it. Contrary to how they see and present themselves, celebrities in general are conformist and desperately insecure. They want to be loved and accepted by each other as well as by their fans, so they don’t want to risk breaking free of the ideological lockstep in which most of them march.

When it comes to the worldwide threat of violent jihad, too many celebrities have bought into the PC orthodoxy which states that terrorism is blowback for Western imperialism and which equates legitimate criticism of political Islam with bigotry. They also, understandably, don’t want to make themselves targets for terrorists. So it’s safer for them to pile on the bandwagon against the nonhuman enemy of global warming (or global cooling, or climate change, or weather – whatever it’s being called this week). This head-in-the-sand timidity has to end.
True, a performer who takes any public political stance risks alienating half of his or her audience, but that has never stopped celebs from promoting PC-validated causes. They need to be equally willing to promote a very politically incorrect awareness of, and resistance against, the very lethal threat of Islamic terrorism. National security shouldn’t be a partisan issue; terrorists don’t distinguish between Democrat and Republican.
Second, they can use their formidable star power to rev up creative projects which confront terrorism in a proactive way. Once upon a time, for example, Hollywood produced patriotic films that inspired Americans to persevere against Nazism and Japanese imperialism; some movie stars, such as Jimmy Stewart and Ernest Borgnine, went to war themselves. Conversely, since the September 11, 2001 terrorist attacks, Hollywood spent the next dozen or more years pumping out anti-war films that blamed America first and depicted our soldiers as PTSD-addled, ticking time bombs. Only recently, with such blockbusters as American Sniper and 13 Hours, has Hollywood begun to take a more pro-American stance.
If celebrities really want victory over our terrorist enemies (and honestly, for many of them that’s a big if), they can help accelerate that momentum by producing more such patriotic fare. Even talking up America in interviews, publicly defending the values and freedoms of Western civilization, and denouncing the brutal totalitarianism of the jihadists helps unite Americans against our enemy and is another step toward victory.
Third, they can take a social media tip from actor James Woods who, while not a Kardashian-level player, has a very active Twitter presence and used it to aid the families of the Ariana Grande bombing victims. Instead of merely tweeting condolences, the outspoken conservative took action by retweeting contact information and photos of missing concertgoers to his 657,000 followers, and encouraging others to do the same.
That was after-the-fact, but celebrities can also use social media to help prevent terrorism by encouraging a “see something, say something” mindset among their fans that will help break the bonds of politically correct resistance. If celebrities went so far as to educate themselves about the threat, they could also promote that education among their social media followers in the same way that they now promote awareness about other issues such as bullying or human trafficking.
Fourth, they can learn from actor (and bass player) Gary Sinise, who quietly devotes an enormous amount of time to entertaining troops abroad with his band and working with our wounded warriors at home. This indirectly pushes back against terrorism by supporting our military in much the same way Bob Hope used to bolster our troops’ morale at war. If celebrities were as willing to march in the streets to honor the courageous service of our armed forces as they are to march against Donald Trump, they would actually be doing some good instead of mere virtue-signaling.
Getting the largely left-leaning community of celebrities to reverse their mindset about terrorism admittedly will require a seismic cultural shift. Some, myself included, would say that such an expectation is absurdly optimistic. But the alternative is to continue merely tweeting out condolences to the families of slaughtered innocents. If celebrities could be pushed to remove their multiculturalist blinders; if they could find the courage to declare that Islamic fundamentalism is a threat to all the issues they claim to champion – women’s rights, LGBT rights, peace, etc.; if they truly care, they can help turn the tide.
From Acculturated, 5/24/17
at 12:28:00 AM