The Left’s Betrayal of Terrorism’s Victims 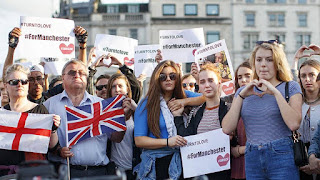 The recent massacre of Ariana Grande concertgoers in Manchester at the hands of a Muslim suicide bomber prompted the usual celebrity blather about conquering terrorism through love. Pop superstar Katy Perry, for example, pleaded “No barriers, no borders, we all just need to co-exist. We’re just all loving on each other and we should just stay loving on each other.” Sorry, but as much singalong fun as The Beatles’ “All You Need is Love” was half a century ago, it’s not a counterterrorism strategy. Pretending that it is is a betrayal of the memory of the men, women, and children slaughtered in the name of Allah, as well as a betrayal of the victims to come – and there will be many, many more unless we stop passively mourning and act upon the righteous anger in our hearts.
In all fairness to Perry, we shouldn’t be looking to pop stars for terrorism insights. British rock singer Morrissey, however, offered a dissenting voice of moral clarity. In an outburst on Facebook in the wake of the bombing, Morrissey, former frontman of the Manchester band The Smiths, tore into Prime Minister Theresa May, London Mayor Sadiq Khan, and the Queen herself for the attitude that is betraying the commoners across western Europe who are now routinely victimized by violent jihad.
“Theresa May says such attacks ‘will not break us,’” Morrissey wrote, “but her own life is lived in a bulletproof bubble, and she evidently does not need to identify any young people today in Manchester morgues. Also, ‘will not break us’ means that the tragedy will not break her, or her policies on immigrations. The young people of Manchester are already broken — thanks all the same, Theresa.”
Regarding the Muslim Khan, who infamously declared that terrorism must be “part and parcel” of life in a big city like London, Morrissey wrote, “Sadiq Khan says ‘London is united with Manchester’, but he does not condemn Islamic State — who have claimed responsibility for the bomb.” As for the Queen, she “receives absurd praise for the ‘strong words’ against the attack, yet she does not cancel today’s garden party at Buckingham Palace...”

Morrissey concluded by lashing out at Manchester mayor Andy Burnham for claiming that the attack was the work of an extremist. “An extreme what? An extreme rabbit? In modern Britain everyone seems petrified to officially say what we all say in private,” he said. “Politicians tell us they are unafraid, but they are never the victims. How easy to be unafraid when one is protected from the line of fire. The people have no such protections.”
Well said, but this was too much moral clarity for Guardian columnist Suzanne Moore, a self-described misandrist, who replied with a sanctimonious lecture typical of the leftist elite’s kneejerk defense of Islam and contempt for terrorist victims. She begins by obligatorily lamenting the bodies of young Manchester girls shredded by a nail bomb. Then she minimizes the role of Islam in the attack by transferring the blame to – wait for it – sexist men.
“[T]here is anger now and the message of love as resistance is not enough for many,” Moore writes. “From those who troll for a living, from Piers Morgan to Katie Hopkins, there emerges [sic] yet more hate figures and this hate spirals. Exactly the aim of terror.” Typical leftist ignorance. The aim of Islamic terrorism is not to drive infidels into a spiral of hate; the aim is to drive us into submission. Moore then criticizes Morrissey, whom she dismisses as “closer to Nigel Farage then Oscar Wilde.”
For Moore, the real blame lies with men and their “toxic masculinity,” as the buzzphrase goes. “When I first heard the awful news about Manchester, of course I thought it had been carried out by some disturbed man. Male violence is a given,” she sneers, ignoring the battalions of female terrorists among Islam’s ranks.
“This is not to say that all men are terrorists,” she concedes, “but if we cannot identify the connection between these acts of violence and the construction of a kind of masculinity that so-called “radicalization” offers uncertain young men then we cannot combat it.” Note the use of “so-called” and the scare quotes around “radicalization” – that’s because Moore and her Progressive comrades cannot bring themselves to fault Islam. They’re much more eager to blame masculinity itself, because the deconstruction of it is a primary aim of cultural Marxism.
“We can pore over sacred texts to be told that jihad is not legitimate, but that’s not right either,” she continues. “Indeed, this is to act as if all these murderers are inspired by religion and a complex understanding of global politics. We know this not to be true.”
Actually, we do know this to be true – the terrorists themselves from Osama bin Laden onward keep trying to tell us it’s all about religion and global politics – but the multiculturalist elites like Moore refuse to accept it. No, Islamic terrorism must be about something else – poverty, perhaps, or colonialism, or alienation, or Islamophobia, or misogyny:
They share a hatred of women and gay people as less than human, as completely “other”. The desires that they provoke means they must be destroyed. Deep-seated misogyny is not exclusive to the idiots of Isis. Think of the American high-school shooters who often express these feelings.
We see this pattern over and over again: alienated young men withdrawing, unable to deal with their own inadequacies, drawn into gangs that provide meaning and purpose. Am I comparing Isis to a criminal gang? Absolutely. One that we know preaches extreme misogyny.
Her solution, then, is not to confront the Islamic roots of such terror attacks as the one in Manchester, but “resistance to misogyny of all kinds, to fight for the rights of women and gay people the world over.” And yet to point out to Moore that fundamentalist Islam is a direct threat to the rights of women and gay people would be denounced as bigotry and Islamophobia.
Moore’s counterterrorism strategy is the left’s in a nutshell: 1) deny the religious motivation for Islamic terror; 2) reject the option of fighting back because doing so only creates more terrorists; 3) keep proclaiming that love will overcome “hate.” As Katy Perry put it, “we should just stay loving on each other.”
Juan Cole at the leftwing The Nation concurs. In an op-ed with the intentionally provocative title, “Ariana Grande Understands Counterterrorism Better Than Jim Mattis,”﻿ he objects to Mattis’ strategy of militarily annihilating the enemy; that just radicalizes more Muslims. That approach, Cole asserts, is “like fighting forest fires with gasoline hoses.” Inclusiveness, not polarization, is the way, he claims.
After Ariana Grande announced that she would return to Manchester for a benefit concert for the victims, Cole praised her inclusive message to her fans, which read, in part,
The compassion, kindness, love, strength and oneness that you’ve shown one another this past week is the exact opposite of the heinous intentions it must take to pull off something as evil as what happened… We will not quit or operate in fear. We won’t let this divide us. We won’t let hate win.”
Cole calls these sentiments “the essence of counterinsurgency.” In fact, they are the essence of submission.
From FrontPage Mag, 6/2/17
at 12:35:00 AM