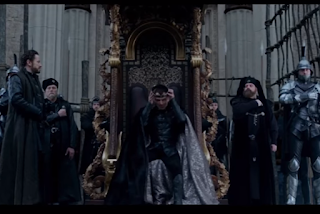 Hollywood has a mixed record when it comes to transposing classic works of literature into film. You can count such movies as The Lord of the Rings and the recent The Jungle Book remake among its successes. Unfortunately for lovers of the Arthurian canon such as myself, director Guy Ritchie’s new King Arthur: Legend of the Sword will not be joining them.
King Arthur was reportedly intended to kick off a six-part franchise that would embrace the whole sweep of Arthurian legend, but with the film’s dismal 26% rating on Rotten Tomatoes and paltry $15 million opening weekend (on a $175 million budget), there will likely be some serious soul-searching at the studio about going forward with that ambitious venture.
What went wrong? Guy Ritchie (Snatch, Sherlock Holmes) brought his signature dazzling visual style to the project, but in an otherwise favorable critique, National Review’s Armond White dismissed it as borrowing too heavily from the likes of 300 and The Lord of the Rings; and the fusion of Ritchie’s British crime underworld sensibility with the sword-and-fantasy genre resulted in what less charitable critics are calling an incoherent mess.
SPOILERS AHEAD
But the core problem with King Arthur is, well, King Arthur. I’m willing to forgive a lot in an action-adventure film if it features a protagonist who inspires me to come along on his hero’s journey; on that score, King Arthur: Legend of the Sword surprisingly falls short, and that could be the reason it’s not connecting with audiences.
This flick is an origin story (hence no Guinevere, Merlin, or Mordred), and Ritchie deviates from the source material by presenting Arthur as having been raised in a brothel after his parents, the king and queen, were murdered before the toddler’s very eyes, a là Batman. Arthur grows up as a savvy hustler with a chivalrous streak that prompts him to mete out rough justice to any customer who abuses the prostitutes. Meanwhile, the suppressed memory of his parents’ death at the hands of the evil pretender to the throne, played by Jude Law, troubles Arthur in nightmares.

But Arthur finds himself becoming a reluctant folk hero and Law’s target when he is revealed as the true king by drawing the magical sword Excalibur from a stone. Arthur eventually stops resisting his destiny and takes up the sword to confront the sorcerer-king Law.
The movie has a driving, percussive soundtrack, spectacular visuals, and action sequences aplenty, but it veers dangerously close to being full of sound and fury, signifying nothing. Spectacle alone is not enough to stir the audience’s heart. No matter how epic the canvas, any story must, at its core, focus on the protagonist’s arc, from (preferably) bad to good, from weakness to strength, from sin to redemption.
Some reviewers have praised actor Charlie Hunnam’s charismatic turn as Arthur, but charisma aside, his character’s arc is more of a straight line. In the beginning of the film he is a cocky, streetwise everyman, and at the end of the film he is a cocky, streetwise everyman. He may be king now, but his motto is still a very easygoing “Why have enemies when you can have friends?” Not exactly Churchillian.
Magic seems more central to the story than the quality of Arthur’s character. The film is less about him heroically overcoming evil than it is about white magic overcoming black. Yes, he shows courage by eventually shedding his reluctance to fight, but ultimately it is the magical sword Excalibur itself, more than Arthur, that wins the day (remember, the film’s subtitle is, tellingly, Legend of the Sword). Arthur even admits that he was not in control of the sword; it was in control of him. At other times a nameless sorceress has to come to his rescue.
Ritchie has essentially made this a revenge film (Arthur confesses to being driven by vengeance when he tells Jude Law, “You created me.”). Everybody, myself included, loves a good revenge movie, but this is the Arthurian legend we’re talking about. Revenge alone does not an epic make. The hero must have a higher, more noble, more inspirational cause (think The Lord of the Rings). He must have the quality of character to rise to the occasion (think Gladiator). And he must be willing to sacrifice himself on behalf of that cause (think 300).
Sure, Arthur and his cohorts free the kingdom from tyranny, but that was primarily his cohorts’ goal; Arthur’s was to avenge his parents. There is little indication that he felt a sense of patriotism or kingly responsibility toward anyone besides his immediate circle of friends (literally a “circle,” because they became the core of his Round Table). Perhaps in future installments of the franchise we would have seen more character development in Arthur, but audiences needed to see more in this one.
There is arguably no literary hero in the history of Western culture more well-known and influential than King Arthur. But in Guy Ritchie’s vision, the man sadly doesn’t measure up to the legend.
From Acculturated, 5/18/17
at 8:49:00 PM