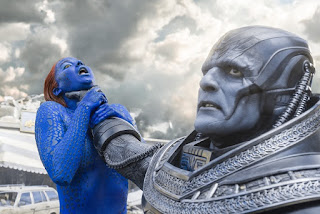 When 20th Century Fox’s X-Men: Apocalypse opened over the Memorial Day weekend, controversy arose over billboards featuring the arresting image of a ginormous male Marvel Comics character named Apocalypse gripping the female mutant Mystique by the throat. The image offended some, such as actress Rose McGowan, who wrote that “There is a major problem when the men and women at 20th Century Fox think casual violence against women is the way to market a film.” But McGowan’s complaint is off the mark, and only underscores the problematic nature of the demand for onscreen equality of the sexes.

McGowan wasn’t alone; others joined her in protest of the image. Among others, Jay Edidin from the podcast “Jay & Miles X-Plain the X-Men” called it “gratuitous” and “offensive in ways that serve absolutely no purpose.” Devin Faraci at the blog Birth.Movies.Death agreed: “It’s just an image of a big guy choking out a smaller woman.” Jennifer McCleary-Sills of the International Center for Research on Women says it’s a reminder of how violence against women is used by Hollywood as a default and “seen as sexy for all the wrong reasons.” In a Facebook post to The Hollywood Reporter (THR), McGowan herself wrote that “[t]here is no context in the ad, just a woman getting strangled.”

That’s not so, however. The clear context is that the billboard is promoting a superhero film from a Marvel universe in which super-powered women such as Jennifer Lawrence’s Mystique and Scarlett Johansson’s Black Widow abound. Besides being fictional, Mystique is not merely an ordinary woman being strangled by a much stronger man in the image, which would certainly by disturbing in the context of a different film genre – say, a drama or thriller. Rather, the dramatic tension stems from the fact that she is a kick-ass super-mutant up against an even more powerful supervillain, not that she is the helpless victim of “casual violence against women.”

The ad may arouse shock or indignation in some viewers who innately understand that violence against a woman – even a super-powered one – is morally repugnant, and 20th Century Fox may be playing on that instinct to stir up an emotional response to the billboard in order to drive up ticket sales for the movie. But the image certainly doesn’t send the message that such violence is acceptable or sexy.

The controversy is reminiscent of the misguided outcry which greeted Pat Benatar’s Top 10 single “Hit Me With Your Best Shot” back in 1980. An anthem of feminine strength, tenacity, and fearlessness, the song ironically sparked a massive backlash from feminists who ludicrously perceived it as encouraging domestic violence against women.

The aforementioned Jennifer McCleary-Sills told THR that “some might not see [the ad] as an issue because it is a film about violence… with male and female characters who are warriors and fighting each other as equals.” Exactly. But McGowan couldn’t accept the politically incorrect message it seemed to be sending. “Imagine if it were a black man being strangled by a white man, or a gay male being strangled by a hetero? The outcry would be enormous.”

Indeed it would, but that outcry, like McGowan’s, would be hypocritical. Yes, violence against women is a serious issue in the real world, and the entertainment industry has been known to sexualize that (horror filmmakers, I’m talking to you); but McGowan’s accusation exposes the hypocrisy of “identity politics,” the proponents of which view everything through the distorted lens of class, gender, and race. For them, it is offensive for Hollywood to show certain demographic groups – women, blacks, gays – as weak or as victims of violence because, the reasoning goes, those groups have been historically oppressed and marginalized. Conversely, then, in the name of justice, fairness, and equality those classes now must be depicted as strong and heroic, and the only acceptable victims are the supposed historical oppressors: straight white men.

Despite, or perhaps because of, the fact that in the real world women generally speaking are not the fighting equals of men, social justice warriors have long demanded to see female characters who are the equal of any male in heroism, strength, courage, and battle skill. Such onscreen equality now exists in films like Mad Max: Fury Road, Star Wars: The Force Awakens, and the Hunger Games trilogy, to name just a few, and Hollywood is no doubt just getting started. But controversies like this one prove that equality in the entertainment arena isn’t enough for feminists who want it both ways: they’re fine with a woman character waging casual violence against men and yet want to claim victim status when the tables are turned. Sometimes feminists simply don’t know to quit when they’re ahead.