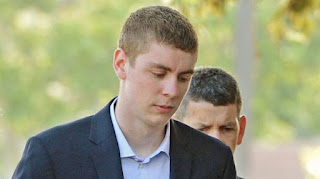 The internet has been afire lately with the shocking story of the rape of a young woman by a Stanford University athlete, and the subsequent slap on the wrist he received from the judge in the case. Apart from the pain and injustice suffered by the victim, at the heart of this story is a failure of male honor.


In January 2015 two passing students spotted Brock Turner, 20, behind a dumpster outside a Stanford frat house, raping a young woman passed out from drinking. He tried to flee but the students tackled him and held him for the police. Brock eventually was given a six-month sentence and probation, a lightweight punishment that sparked an explosion of online protest, particularly after the victim herself posted online a devastating statement that went viral about the rape and its effect on her.


Prior to the sentencing, Brock’s father wrote a letter to Judge Aaron Persky attesting to his son’s character and sincere remorse. The father referred to the rape as “the events” of that night, and does not mention Brock’s victim at all. He begs the judge not to ruin the boy’s promising future over what he called, in stunningly tone-deaf phrasing, “20 minutes of action.” He apparently did not consider how those 20 minutes irrevocably altered the victim’s future as well.


Brock’s mother also wrote a plea for mercy to the judge. Not one of her nearly 3500 words refers to the crime or Brock’s victim. It’s as if Brock’s family was simply struck one day with undeserved misfortune that affected no one else. In fact, to read both these letters, one would think that Brock himself was the victim – the victim of a guilty verdict. His parents seem wholly detached from any sympathy for the actual victim of their son’s assault. I understand that the intent of their letters was to shift the focus from the crime to their son’s positive qualities, but they gave no indication that they believe Brock should bear any responsibility for such an ugly act.


Even more disturbing is the reaction of Brock himself, who tried in his own desperate statement to the judge to place the blame on peer pressure and Stanford’s “party culture,” which he promised to devote himself to spreading awareness about. “I want to take what I can from who I was before this situation happened,” he said [emphasis added]. “I know I can impact and change people’s attitudes towards the culture surrounded by binge drinking and sexual promiscuity that protrudes through what people think is at the core of being a college student.”


While college binge drinking and sexual promiscuity are certainly serious issues, rape is another level of gravity altogether. Brock did acknowledge that he is the “sole proprietor of what happened that night” [emphasis added again] but maintained that the sex was consensual (sorry, but no woman consents to being manually probed and humped while lying unconscious behind a dumpster, and the fact that he attempted to flee when discovered is damning evidence that he knew he was guilty). “There isn’t a second that has gone by where I haven’t regretted the course of events I took on January 17th/18th,” he claimed. The course of events I took – again, a refusal to say directly what he did.


Brock came close to an apology by saying that his “poor decision-making and excessive drinking hurt someone that night, and I wish I could just take it all back.” There’s no question that excessive drinking leads to poor decisions at best and tragedy at worst. But rape is not a “poor decision”; majoring in puppetry is a poor decision. Rape is a heinous crime, and the first step toward Brock’s atonement must come from a willingness to own up to that.


The next step would be to seek mercy and forgiveness not from the judge but from his victim. But according to her, Brock did not: “Had Brock admitted guilt and remorse and offered to settle early on,” she wrote, “I would have considered a lighter sentence, respecting his honesty, grateful to be able to move our lives forward.”


I am sympathetic to Brock’s parents for being put in such a terrible position. As a parent myself, I understand the instinct to protect your child, even a grown child like Brock, from a fate as nightmarish as prison. But as devastating as it is for them to face, Brock brought this on himself and his parents must be willing to let their son suffer the consequences. If I had a son guilty of rape, I would be horrified; I would do anything to turn back the clock and erase the tragedy – to spare the victim her trauma and to restore the bright potential of my son’s character. In all fairness, Brock’s parents probably do feel that horror privately.


But that is the harsh reality of our life choices: there is no turning back of the clock. The honorable response is not to seek avenues of escape but to face the music. Men of honor hold themselves and each other responsible for their sins. In this respect, all the men of this tale fell short: Brock did not fully acknowledge his guilt; his father abetted that evasion; the judge’s sentence trivialized Brock’s crime and did not hold him accountable.


“Honor,” wrote Sophocles, “is not about making the right choices. It is about dealing with the consequences.” It would break my heart, but I would hope that I would have the integrity to tell my son in the same situation that the honorable way forward is to accept the consequences for his crime. That is the beginning of forgiveness and redemption.
From Acculturated, 6/15/16
at 11:08:00 AM