The Good News About the Video Music Awards 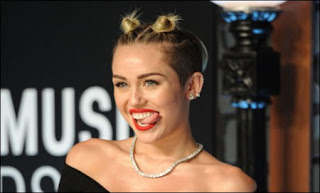 If you missed MTV’s annual Video Music Awards show last Sunday night, then you missed all the joy of witnessing the already morally and artistically bankrupt music industry sink to a new degrading low. You may also have missed witnessing the beginning of America’s boredom with and rejection of that bankruptcy.

Even if many conservatives, fed-up with the music biz’s hypersexualization of children and its celebration of gangsta culture, happily missed the show and the aftermath, much of the rest of the country didn’t. The news, social media, and water cooler talk in the following days were all dominated by the tragicomic spectacle of former Disney child star Miley Cyrus (now 20) in the unsexiest bikini ever designed, crotch-grinding, tongue-wagging, and “twerking” (you don’t want to know) her anorexic, nearly-naked way through an hallucinatory stage performance featuring dancers with giant teddy bears strapped to their backs. CNN deemed the display important enough to put at the top of its website Monday morning (and was hilariously ridiculed for it by the satirical Onion.com).

The expected outrage from the usual suspects ensued. The Parents Television Council, for example, condemned MTV for marketing “adults-only material to children while falsely manipulating the content rating to make parents think the content was safe for their children” (the show was approved for viewers as young as 14). “How is this image of former child star Miley Cyrus appropriate for 14-year-olds? How is it appropriate for 14-year-olds to see a condom commercial and a promo for an R-rated movie during the first commercial break?”

This is at least partly the reaction that the show’s producers and performers were aiming for, to confirm their “edgy” status (yawn) and to boost ratings. According to The Hollywood Reporter and MTV’s own website, which has Pepsi ads splashed all over it featuring the sad new slogan “Live for Now,” last Sunday’s show garnered a total audience of 10.1 million viewers — a 66-percent increase over last year's show — making it cable’s top-rated entertainment telecast of the year among viewers aged 12-34. It earned a 7.8 rating in the same demographic, a 47-percent increase over last year's show. Of course, that increase was largely due to the centerpiece act – superstar Justin Timberlake and the reunion of his “boy” band ‘N Sync, now in their late 30s – and the Madonna-spawned circus act, Lady Gaga.

But it was Miley Cyrus who stole the show, and for all the wrong reasons. Cyrus’ awkwardly bizarre prancing and tongue-lolling hit their nadir in a medley with singer Robin Thicke and his misogynistic hit “Blurred Lines,” and set a social media record for most tweets per minute – 360,000, if you’re curious. The two-hour telecast generated 120 national and worldwide trending topics on Twitter, and 1.2 million Instagram likes, if you’re keeping score.

VMA performers and winners naturally benefitted from all that exposure. Timberlake’s entire oeuvre saw a 1,876 percent increase in sales on iTunes. Cyrus’ upcoming album got a boost in pre-sales, and she will likely have two singles at once in the Top 20 next week. So no doubt she and her record company team would consider this a win in her column.

They would be wrong. Temporary sales boost aside, her appearance on the show was a Pyrrhic victory. She has secured her reputation as an object of ridicule and effectively put her career on shaky ground if not a downhill slide. Even better, and more importantly, she almost singlehandedly may have set the music industry and/or its audience on a positive new course.

It’s easy to denounce the VMA as Sodom-and-Gomorrahesque, which it was; it’s easy to see the show as a sign of our cultural degradation, which it was; it’s easy to deride MTV’s and many (but not all) of the performers’ naked desperation for ratings and relevance. But outrage over all that was not America’s dominant reaction; there was also plenty of just plain revulsion and embarrassment – for Cyrus, the event itself, MTV, and the music industry as a whole.

But the primary reaction to the VMA’s attempt to shock long-jaded audiences and to push an already gaping envelope was not titillation or shock but boredom. I have yet to hear or read anyone defend Cyrus’ sad display as sexy; far from it. Most viewers seem to have found her and the show’s sexual excesses unsexy and boring, and nothing and no one in the entertainment biz can survive being both unsexy and boring.

(Contrast this with the Country Music Awards. I’m not personally a fan of country music, but I readily acknowledge that the genre features likeable, down-to-earth stars who actually sing and play their own instruments and who understand that sexiness has little or nothing to do with how much skin or tongue they’re baring. Country performers not coincidentally also tilt politically right.)

America may finally have reached a point where shock value has no value. Sunday’s VMA may have proved that not all publicity is good publicity, to paraphrase the old saying. Is it possible that the culture of the music industry – which is more degraded even than Hollywood, the usual target of conservative disgust – may have bottomed out, if you’ll pardon the pun?

Short of actual pornographic acts performed live onstage (and I’m not ruling out that possibility yet), there’s nowhere for American music culture to go now but up. Miley Cyrus exposed it as desperate and empty – something conservatives have known for a long time, but which even young fans may now be awakening too as well. It will take a while to work its way out, perhaps even years, but the ludicrousness of much of last Sunday night’s Video Music Awards may have finally driven people toward the recognition that an oversexed culture is a boring, empty, joyless culture.