‘Seconds’: The Dark Side of Second Chances 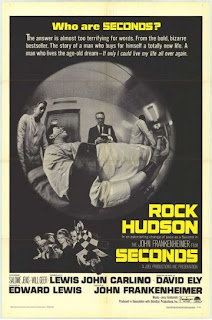 “The mass of men lead lives of quiet desperation,” Henry Thoreau once wrote, and there was a time when I led such a life. I vividly recall sitting in my office once many years ago, working at a job that had nothing to do with who I was or wanted to be, and suddenly being so overwhelmed by the panicky realization that I was wasting my life, that I had the distinct sensation I was bursting out of my skin.

I changed direction after that, but untold numbers of others before and since came to a similar epiphany too late, and passed their remaining days wrestling with regret for a soul-numbing, unfulfilled life. Who among them wouldn’t have jumped at the opportunity to turn back the clock, be free of the trap they built for themselves, and get a fresh start, a second chance?

Last Tuesday the Criterion Collection released the DVD and Blu-ray of director John Frankenheimer’s Seconds, a 1966 cautionary tale which spins that yearning into a Twilight Zone-style, existential nightmare. It starred the hunky Rock Hudson, of all people – Hollywood’s beloved leading man at the time, more commonly associated with tame romantic comedies – in perhaps the most daring role of his career (he shared the film’s lead role with familiar, older character actor John Randolph).

The film begins with Randolph playing aging New York banker Arthur Hamilton, desperately unhappy in a meaningless existence and a loveless relationship. He is contacted one day by someone claiming to be his old friend Charlie – a deceased friend. Offered a miraculous new lease on life by a mysterious firm known only as the Company, Charlie had abandoned his own miserable life for a new identity after faking his death. He tells Hamilton he’s never felt more alive.

Presented with the same opportunity, Hamilton follows in Charlie’s footsteps; the Company arranges his “death” and he is transformed by plastic surgery into the younger, dashing Tony Wilson, played by Hudson.

Hudson is Hamilton’s “second,” a “reborn” with a fresh identity as a moderately successful painter with a Malibu beach house. But the restless Hamilton never embraces living this comfortable lie. “Somewhere in the man,” says his young new girlfriend, “there is still a key unturned.” Once he discovers the shocking truth that others in his Malibu artist community are reborns like him, he goes back to the Company for another go-round, a better fit.

He ends up in a Purgatory-like waiting room where he encounters Charlie, who is himself waiting for another turn. It seems Charlie’s rebirth wasn’t all it had cracked up to be. Hudson explains to his commiserating friend what drove him to accept the Company’s offer in the first place: “The years I spent trying to get all the things that I was told were important, that I was supposed to want. Things – not people or meaning, but things.”

Hudson is optimistic that this time he’ll get life right. This time he won’t simply exist – he’ll live a fully authentic life. But when his name is finally called in the waiting room, he learns to his horror that he has run out of second chances. You half-expect Rod Serling to step into camera to add a darkly poetic moral to the tale, something about being careful what we wish for, or making the most of the one life we’re given.

The L.A. Times called Seconds “an uncompromising critique of modern life,” “a relevant dissection of consumerism and conformity, and a blistering portrayal of freedom.” Our awareness today that the secretly gay Hudson was leading a double life up until his final weeks on earth (he died of HIV-related complications in 1985) lends an extra layer of power and poignancy to this film about authenticity and fulfillment.

It’s human nature to see the grass as greener on the other side, to yearn for a do-over to reverse our failures, missteps and regrets. But as Arthur Hamilton learned the hard way, we are who we are and this is the life we have. Thankfully, every morning we are given a second chance – to pick ourselves up, recommit to fulfilling the potential of our most authentic selves, and give meaning to our lives through purpose. Every morning is a new opportunity to live in such a way that – as Tony’s girlfriend put it – we don’t leave that key inside us unturned.