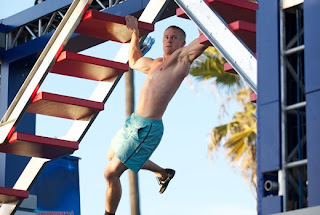 Amid all the manufactured melodrama, the Machiavellian alliances, the transparently sham romances, the needy narcissism of erstwhile celebrities, and the endless succession of forgettable idol-wannabes, it’s refreshing to find a pair of reality TV competition shows that not only celebrate extraordinary skill, but also highlight good sportsmanship and the drive for personal excellence – American Ninja Warrior and Top Shot All-Stars, both now in their fifth season.

American Ninja Warrior is the flashier, bigger-budget American version of a Japanese TV show in which contestants run what is described as the most challenging obstacle course ever. Only three ever succeeded in conquering the course in the original show, and no one yet has gone all the way in the American version.

Among its extraordinarily demanding tasks: contestants hanging by a bar must use it to haul themselves up a “salmon ladder,” jump by jump; they must swing from pair to pair of nunchuks suspended over water; cross a lengthy narrow ledge with only their fingertips; run up the daunting, 14-foot “warped wall”; and overcome other obstacles with names like Jumping Spider, Prism Tilt, Rumbling Dice, and Body Prop. The course requires heavy doses of agility, flexibility, grip strength, and perhaps most importantly, superhuman mental discipline.

Apart from the astounding physical demands, another attraction of the show is the variety of the competitors – from soccer moms to firemen, from students to the middle-aged (the oldest is 67) – and their motivations, many of which are powerful and touching. One was a former gang member, shot multiple times and lying in the hospital for six months saying, “If I survive this, I’m going to run American Ninja Warrior.” Another was a Cambodian man who as a child escaped a death camp that claimed the rest of his family; he choked up with emotion as he described how lucky he feels to be in America, the land of opportunity. Many do it to inspire their children, or to honor the memory of a lost loved one. There is, of course, the incentive of a whopping $500,000 cash prize, but it seems more important to these contestants to strive for some deeply personal goal and to earn the title of the first American Ninja Warrior.

In Top Shot All-Stars, elite sharpshooters from previous seasons face off in various shooting challenges to win sporting equipment and Bass Pro Shops gift cards. The grand prize is $100,000 and a Tahoe Q5i Speedboat. A speedboat, people – how cool is that?

As in American Ninja Warrior, the Top Shot competitors this season, who range in age from 24 to 53, come from all walks of life: a police officer who served in Operation Iraqi Freedom; the first female member of the Venezuelan Olympic shooting team; a video producer who taught himself to build and shoot weapons; a Homeland Security agent; a plumber who graduated at the top of his Marine Corps Sniping School class; and an NRA 11-time pistol champ.

What you won’t see on either show is the tiresome trash-talking and the “I’m not here to make friends – I’m here to win” arrogance that dominates too many other competition shows (and the world of sports in general, sad to say). What you will see is uplifting camaraderie and mutual respect. The athletes and shooters of both shows cheer on their competition and applaud their good work. Sure, they’re competing, but they prove that good sportsmanship is not about ego; it’s about striving to be the best while respecting the skill and achievement of others.