From Wrong Number to Wedded Bliss 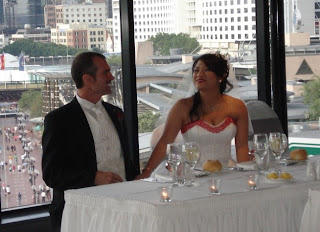 Successful relationship stories seem rather rare in Los Angeles, which is notoriously hellish for singles seeking soulmates. Recently my friend, Acculturated colleague, and fellow Angeleno R.J. Moeller wrote a piece entitled “From Hashtags to Holy Matrimony” about how he found his future bride on Twitter, of all places. So I was inspired to contribute my own L.A. story of serendipitous love to give others in this town (and elsewhere) a ray of hope.

I was in a relationship when I moved here in 1998, but it fizzled out, leaving me to navigate the treacherous waters of single life in L.A. That may not sound like a bad thing; and it’s not, if your idea of dating bliss is an empty succession of beautiful people who have zero capacity for caring about anyone or anything but themselves. Very unsatisfying, however, for a monogamist-at-heart like me. I was beginning to despair of making a love connection when one day in late October 2002 I placed a long-distance call to a company in Sydney, Australia and dialed the wrong number.

To be precise, I dialed the correct company but reached the wrong extension, and a young woman answered. Her voice immediately took my breath away. Later Anna would say that she heard me pause and she knew I’d been “struck by the thunderbolt,” as Michael Corleone is in The Godfather when he first glimpses the Sicilian beauty who would become his wife. It was love at first listen.

I was so captivated that I immediately began flirting from the other side of the planet, sight unseen – which I would not ordinarily recommend, having had a couple of awkward surprises doing so in the past. But I got lucky, because as I later discovered when we began trading pictures (not like the ones Carlos Danger and Sydney Leathers exchanged), she was as attractive as her voice was compelling.

Anna and I began emailing and phoning each other literally every day, several times a day. On the surface, we didn’t seem compatible: she’s a generation younger, our life experiences and education were very different – and she was half a planet away. Why bother? I bothered because we clicked, and because instinctively I sensed there was something lasting and important here.

We grew to know each other over the course of countless conversations for a full year until I flew to Sydney to meet her face-to-face. By that time we felt we were already in love, but who knew what might happen when we met in person?

That first visit confirmed everything and turned into a long-distance relationship – almost as long-distance as one could possibly get. Even a nonstop flight was 14 or 15 hours. How did we make that work? Fortunately, as a writer I could take my laptop and write from Sydney. So I visited her as often as four times a year and stayed for several weeks at a time. Because she held a more traditional job, she could visit me only once a year as her vacation time allowed.

We kept this up for three years. Our time apart grew more and more unbearable. So on one of Anna’s trips here, I proposed in Santa Barbara, and we married in a small church outside Sydney in January 2007 on a day when the Aussie summer heat spiked to an overpowering 109 degrees. There was no AC in the church, only big fans that reached the attendees but not the altar, where I stood streaming sweat. I lost five pounds that day.

Now we had to manage the immigration process. Our plan was to go straight away to the American embassy and apply for Anna’s visa to move to America, after which she could accompany me back to the States. But the day before we planned to apply, the law changed – suddenly visa applications had to be initiated back in America, and the applicant had to wait out a lengthy process. So I returned home alone and got things underway. We had to wade through an expensive gauntlet of bureaucratic obstacles, until nine months later, like giving birth, Anna joined me in Los Angeles.

You can’t always know when you’re making the right decision. You sometimes have nothing to go on but your instincts – and trusting mine about pursuing a long-distance courtship was the wisest decision I ever made. I’ve never met anyone kinder and more loving, anyone more full of life and joy and optimism, anyone who combines so much beauty of body, heart and soul as Anna. I rode out a number of relationship failures and false starts in my life, and was finally rewarded beyond measure. We’ve since added two little ones to the mix, giving me the family I never thought I’d have. Now my goal as a husband and father is to earn that blessing.

I once heard Oprah say – I can’t believe I’m quoting Oprah – something to the effect that you shouldn’t need anybody in your life to make you happy or to complete you or to make you a better person; that you should have a full, complete life on your own and then, if you so desire, share it with someone who also has a full life and doesn’t need anyone either. That’s nonsense. People need to love and to be loved, and if you don’t have that, your life is empty. I need Anna in my life. She completes me. She makes me a better man. She fills up my life.

The lessons of my relationship story are: Be patient. Be open to serendipity. Look beyond the obstacles and trust your instincts.

So in the end, my tale isn’t an L.A. story after all, since I, like my friend R.J., had to go outside L.A. to find my Better Half. Does that mean it’s hopeless for Los Angeles singles, or that “conventional” dating is futile? Not at all. True love is where you find it; I just happened to find it on the other end of a wrong number, on the other side of the world.