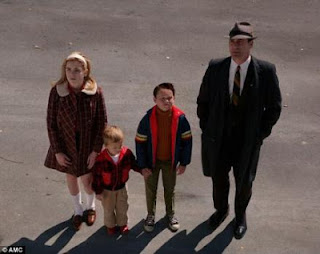 Last Sunday night was the season finale of AMC’s highly regarded hit series Mad Men. In case you’ve been in a coma for the last several years, Mad Men is the 1960s-set drama about the perpetually tobacco-and-scotch-marinated playboys at a New York ad agency, centering on charismatic antihero Don Draper. Sunday’s episode saw several character arcs and plot lines coming to a head, with one theme in particular dominating: the tragedy of broken families.

Don gets a late-night call from ex-wife Betty, who informs him that their young teen daughter Sally has been suspended from her new private school for using a fake ID to buy alcohol for herself and the other girls. Betty’s perfect, icy exterior cracks as she confesses that she has failed as a mother despite all her efforts to duplicate her own mother’s child-rearing disciplines. “This isn’t your fault,” Don offers. “She comes from a broken home,” Betty replies.

This hits Don hard; he hunches over silently for a long beat as he accepts that Sally’s rebellion is the inevitable consequence of his ruined marriage (not to mention the fact that she caught him in flagrante delicto with a neighbor’s wife). Don himself had a loveless childhood as an orphan raised in a whorehouse, and it shaped the course of his adulterous life. His past has haunted him so relentlessly that he breaks down during a client meeting with Hershey execs, and confesses that as a boy, their chocolate intensified his longing to be loved: “It was the only sweet thing in my life.”

Meanwhile ad man Pete has ruined his own family life as well. In his final scene he is perhaps as sympathetic as we’ve ever seen him, as he gazes wordlessly and regretfully at his sleeping daughter before leaving home for good. He sits on the edge of her bed stroking her hair, already feeling the literal and emotional distance growing between them.

Then Ted, Don’s business partner who has fallen in love with copywriter Peggy, caves in to temptation and not only sleeps with her one night but promises to leave his wife and two children for her. But upon returning late to his own bed, where his unsuspecting wife tells him he works too hard, Ted comes to what may be the most mature decision made by any of his cohorts so far. The next morning he pleads with Don, who has decided to get a fresh start in a branch office in Los Angeles, to let him go in Don’s stead, so that he can put 3000 miles between himself and the object of his desire in order to preserve his family. “I’ve got kids. I can’t throw this away.”

Then begins Don’s redemption. He sacrifices his L.A. move for Ted. “I wanted this so much,” Ted says as he tells Peggy goodbye, “but I have a family… I have to hold onto them, or I’ll get lost in the chaos… I can’t ruin all those lives.” The episode closes with Don picking up his kids, including Sally, and driving to a rough neighborhood where he shows them a dilapidated old mansion – the whorehouse. “This is where I grew up,” he tells them, and Sally turns to him in shock as, perhaps for the first time, he begins to open up to her about his damaged childhood.

This is all fictional, of course, but well-told tales can crystallize the truth of our lives in ways that resonate unexpectedly and deeply. This poignant Mad Men episode captured the heartache of families devastated and splintered by infidelity and divorce. I’m the product of one myself. It’s difficult enough for the adults of course, but the children are the real victims. Study after study shows that the children of broken families commit higher rates of criminal behavior; more commonly suffer poverty, mental illness, and alcohol and drug addiction; and tend to perpetuate failed relationships as adults.

Don Draper’s lifelong irresponsibility and selfishness hurt nearly everyone he touched. By contrast, Ted pulled back from the brink and put his family first (“I can’t ruin all those lives”). It may seem a simple and obvious lesson, but it bears repeating because humans are weak and fallible: a happy, stable family depends first and foremost upon protecting our loved ones from our reckless desires. Otherwise we all get lost in the chaos, as Ted feared.
at 10:45:00 AM