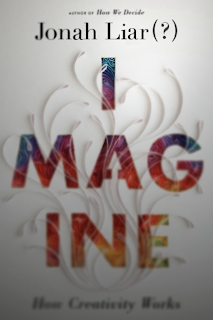 Writer Jonah Lehrer, who resigned in disgrace last year from The New Yorker after he was caught plagiarizing from himself and others as well as fabricating quotes, is back.

By the age of 31, the pop-science author was a rising star when the tangled web he wove began to unravel. He initially denied responsibility, but eventually released a statement of apology: “I understand the gravity of my position. I want to apologize to everyone I have let down, especially my editors and readers.”

Now The New York Times reports that Lehrer has sold a work to Simon & Schuster called A Book About Love. “Jonah Lehrer is an unusually talented writer,” said his publisher’s Jonathan Karp. “We believe in second chances.”

Several years ago James Frey’s memoir of drug and alcohol addiction, A Million Little Pieces, got a bestselling boost as an Oprah’s Book Club selection before his fabrications came to light; the scandal culminated in an appearance on Oprah’s TV show, where she hammered him and his publisher for abusing her trust and that of the readers she sent his way.

Stephen Glass was a wunderkind at The New Republic in the late 90s before his articles were exposed as largely invented (his tale was brought to the big screen in the excellent film Shattered Glass). Another rising star, Jayson Blair at The New York Times, caused a stir when it was discovered he liberally plagiarized and fabricated stories and quotes for the paper. Journalist Janet Cooke’s Pulitzer Prize-winning story for The Washington Post in 1980 was revealed to be fictionalized.

No one until Lehrer, whose new book will use “his journalistic misconduct as a case study of the mysterious and redeeming power of love.” “The lies are over now,” he had promised in his formal apology. But are they? Was he merely using “contrition as a career move,” as Andrew Sullivan once said of Stephen Glass? Slate has a blistering critique of Lehrer’s book proposal that acknowledges the author’s verbal skill but slams its “parade of cheap epiphanies” and strongly suggests he plagiarized portions; is Lehrer no wiser or more honest after all?

That remains to be seen. The publisher and critics alike will scrutinize the new book with the thoroughness of an electron microscope, and Lehrer is fully aware that this is a necessary step to earn back trust. “I am convinced that… unless I hold myself accountable in public, then the lessons will not last,” he said in a media seminar last February where he discussed his fall from grace (an appearance that earned him a whopping $20,000, which naturally sparked an uproar about Lehrer profiting so extravagantly from his own ethical failures).

“This book is about what has lasted in my own life,” he writes in his proposal about the lesson of his public shaming. “I wanted to write it down so that I would not forget; so that, one day, I might tell my young daughter what I’ve learned.” This rings sincere. When life shows us a hard-earned truth, and we have been sufficiently humbled by it, we feel a need to impart that revelation to our children; a liar, on the other hand, isn’t compelled to pass his mendacity on to his. “If I’ve learned anything from writing these words, it’s that love matters. It matters more than I ever thought possible.”

It not only matters, it matters more than anything. As Lehrer himself discovered when his world came crashing down, “When we are stripped of what we wanted, we see what we will always need: those people who love us, even after the fall.” This too resonates as heartfelt and true. No matter what you have or who you are, you are no one until someone loves you and you love in return.

Will A Book About Love convince critics and readers that Lehrer is transformed? “If I speak in the tongues of men or of angels, but do not have love, I am only a resounding gong or a clanging cymbal,” begins the Bible’s I Corinthians. Jonah Lehrer may be skilled enough to write in the tongues of men and angels, but if his book on the redemptive power of love is nothing more than facile wordplay, it will ring false and empty.