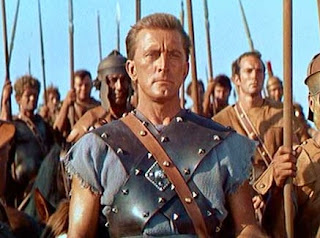 Last week legendary actor Kirk Douglas posted a short plea for – something, it’s unclear exactly what – at the Huffington Post, a vague call for the elimination of guns in America, because, as he put it solemnly, “America’s Cowboy Days Are Over.”

In case you’ve been in a coma for the last century, Douglas, now at the almost Biblical age of 96, is the steely-eyed, cleft-chinned international superstar of such films as Paths of Glory, Lust for Life, Gunfight at the OK Corral, Seven Days in May, and perhaps most memorably, Spartacus. The talented, ridiculously handsome actor has played everything from tortured artist Vincent Van Gogh to a Viking warrior, military officers, cowboys, and, well, Spartacus.

In his HuffPost piece, Douglas says that “under the flooring of my dressing room is a safe. In it are two guns that I used to shoot the bad guys in movies and a silver plated revolver with my name engraved on it which was given to me by some crazy fan.” He writes that “I often played the good cowboy on screen, riding in to save the day. Now, everybody thinks he is a cowboy too. That frightens me. We have become a cowboy country with too many guns.”

How many is too many, Mr. Douglas, and who gets to decide that figure? The Hollywood left generally marches in unthinking lockstep to the progressive call to get rid of guns altogether in America – a simplistic, utopian fantasy that does not and cannot possibly address the complicated reality that millions of guns are already in circulation in this country. The left pontificates about “getting them off the streets” and seems to believe that this is best accomplished through the bureaucratic hassling and demonization of law-abiding gun owners, if not by actually forcing them to turn in their guns to the government – you know, for the sake of the children. Of course, despite a brainless video plea from a gaggle of Hollywood actors to “demand a plan,” the left doesn’t seem to have a plan for disarming criminals, gangs, and the violent mentally ill, who came by their firearm possession illegally.

“I put my guns in the floor safe very long ago so that my children would not be able to find them.” When he was a little boy, Douglas continues, “I was climbing around in the house and I found a revolver on top of a cabinet. I took the gun, ran into the kitchen waving my find. My father grabbed the gun from me and gave me a spanking... I guess he thought he had placed it in a safe spot. There is no safe spot for kids.”

Actually, there are any number of safe spots, although atop a cabinet isn’t one. It’s very simple to ensure that your young children cannot have access to guns at home, and responsible gun owners do exactly that. Keeping your firearms inside a safe underneath the floor may be overkill, however, especially if you find yourself in sudden need to defend yourself and those same children.

“I cannot understand the people who are against some form of gun control,” Douglas muses. “They should be the first to welcome a message on making it more difficult to get a gun.” People aren’t against “some form of gun control” – they are against restrictions that do nothing to make people safer from gun violence, that only punish law-abiding, responsible gun owners, and that are a thinly-veiled gun grab by a totalitarian government that seeks to disarm its citizens supposedly for their own good.

“Many of them,” Douglas went on, “seem to propose more guns being available to everybody.” Do they? Who are these “many” who “seem” to propose that everybody have guns? I don’t know any gun owner who thinks everybody should have guns. I’m fairly sure no one wants gangbangers to have access to guns, or the mentally ill, or Mexican drug cartels, although our own government has no problem arming the latter.

“I have many grandchildren,” says Douglas. “I would hate to leave them a world where guns are easily accessible.” We all would. No one wants guns to be easily accessible to unsupervised, untrained, or very young children. That’s why responsible gun owners take measures to prevent that.

Then he intones the kneejerk anti-gun mantra of the left: “It's time to do something to make our children safer.” Who can argue with that? Who doesn’t want to make children safer? It’s typical leftist, feel-good blather that everyone agrees with but which ignores the reality of an issue and offers no real-world solution.

Douglas closes with his pronouncement that “America's cowboy days are over,” seemingly unaware of his own moral contradiction. He began his article pointing out how he used to ride to the rescue as a movie cowboy – back in the day when Hollywood still celebrated good guys rather than anti-heroes – and closed by complaining that he is frightened that now “everybody thinks he is a cowboy too.” What does he have to be frightened of from the good guys?

Apparently he would like to leave to his grandchildren a world in which there are no cowboys riding to save the day; instead, we surrender our 2nd Amendment rights and trust the government to ride to our rescue.

Under President Barack Obama, America’s cowboy days are indeed waning, a prospect which sends the pacifist totalitarians of the left into giddy spasms of joy. But we live in a world in which people still need Americans infused with the cowboy spirit to come to the rescue, both at home and abroad. Kirk Douglas, acting legend and honorary cowboy though he may be, has joined the ranks of Hollywood dreamers who don’t seem to grasp that it’s not only in movies that good men with guns must stop bad ones; that holds true for the real world too. Disarming the white hats only leaves us all at the mercy of the black hats.