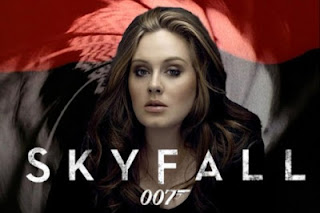 My earliest movie theater memory–in fact, one of my earliest memories at all–is of sitting with dropped jaw, thrilled by the brassy, guitar-driven theme song that opened Dr. No, the first in what would become the longest-running film franchise in history. The Bond theme is still my favorite movie music.

Dr. No was released fifty years ago today. In celebration of Bond’s golden anniversary, today is “Global James Bond Day,” the program for which includes an online live auction charity event organized by Christie’s, and a film retrospective at the Museum of Modern Art in New York, no less. All of this precedes the upcoming worldwide premiere of the 23rd Bond flick, Skyfall, starring the rugged Daniel Craig as the current Bond.

Also kicking off today is the release of the film’s theme song; for each Bond flick this is something of an event unto itself, and being chosen to perform it is a coveted musical honor. The Bond theme songs set the tone for the movies. They are almost always sung by women (past exceptions include Paul McCartney and Tom Jones) who can deliver a bold, femme fatale sexuality in the vocals–a quality that resonates with both men and women in the audience.

Some of the Bond songs work spectacularly well (McCartney’s “Live and Let Die” leaps to mind, as do Garbage’s “The World is Not Enough” and Tina Turner’s “Goldeneye,” the latter written by U2’s Bono and The Edge) and some just can’t seem to connect with and embody the Bond spirit (Duran Duran’s shrill, amelodic “View to a Kill,” for example, and Madonna’s thin, clubmix-y “Die Another Day”).

Now, after such weak experiments as the Alicia Keys-Jack White collaboration “Another Way to Die” from Quantum of Solace and Madonna’s aforementioned “Die Another Day,” Bond is thankfully returning to a more classic style. The theme song for Skyfall will be sung by Grammy-winning Adele, an outstanding choice.

As of this writing, all that’s available of her song is this 90-second snippet, which The Telegraph’s Neil McCormick describes as “a far more traditional Bond theme than we have heard in recent years, with a dramatic chorus and those big, romantic, John Barry strings pulsing beneath while ominous horns swell,” the familiar four-note Bond theme winding in and out. Tantalizingly, the sample ends just as the song seems to verge on a powerful climax. Adele doesn’t have as big a voice as “Goldfinger” belter Shirley Bassey or Tina Turner, but in this understated performance, she “delivers it like she actually means it,” as McCormick rightly puts it.

The fictional James Bond is the ultimate man’s man. For fifty years he and the King of Cool Steve McQueen have arm-wrestled for the top spot in pop culture standards of masculinity, but what perhaps gives Bond the edge (apart from the gadgets) is the music. The Wall Street Journal recently theorized about the Bond music’s psychological impact on males here: “Why do men find the deep guitar notes and swinging horns so intriguing?” They “link the theme to strength, adulthood and virility,” and the women are “reminded of an era of handsome, dashing men who they hoped would sweep them off their feet.” In our own era of often blurred gender roles, those identifications seem to resonate powerfully with people, which may account for why “Bond, James Bond” continues to dominate the film world five decades on.