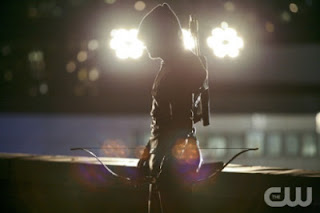 A bow and quiver of arrows have become the sexiest, coolest, weaponized unisex accessory in show biz. From Katniss in The Hunger Games, to The Avengers’ Hawkeye, to the spunky teen princess of Pixar's Brave, to the survivors in NBC’s new post-apocalyptic Revolution, to the animated anti-hero of the spy parody Archer, archery is hot (actually, the raunchy Archer has nothing to do with archery, but it goes to show that even as just a name, “archer” is cool). Now comes the latest and bow-and-arrowest of them all, the CW network’s Arrow.

Based on the DC Comics superhero Green Arrow, Arrow centers on young billionaire playboy (Holy Bruce Wayne, Batman!) Oliver Queen who is shipwrecked on an uncharted island for five years, during which time he mysteriously acquires impressive proficiency in martial arts, languages, parkour, and especially archery. He is rescued and returns to his unnamed metropolis, where he proceeds to wage vigilante justice in an Occupy-style hoodie against the corrupt rich who have oppressed the city’s 99%. He transfixes the bad guys with both a steely gaze and impossibly precise shooting of specially-tipped green arrows.

What transformed Oliver Queen from an irresponsible party animal to an adult of serious commitment and gave his new life purpose? When his dad’s yacht went down in the ocean, Queen had been cavorting with the sister of Lauren, the woman who loves him. The sister dies, and later, adrift together on a lifeboat, his father sacrifices himself to give Oliver a better chance of survival – but not before urging his son to atone for the misery he and his fellow greedy 1%ers had brought to the city. Besides the responsibility of honoring his father’s final wish, Queen is guilt-ridden that he survived, and his father and the sister of the woman he loves did not.

Scott Meyers at the screenwriting site The Black List has an interesting series called The Theology of Screenwriting, in which he explores theological themes in movies and television – not so much in a religious sense, but in the broader dynamic of “characters forced to confront their values, behaviors, and world views related to who they are and how they should act.” Among the concepts examined are Guilt, Redemption and Forgiveness. Meyers defines a character’s redemption as the act of freeing him- or herself from emotional, even spiritual bondage to a past event or action; the character isn’t free to move on with life until he or she confronts this bondage and resolves it. When they do, they achieve redemption, and forgiveness from others may follow.

Oliver Queen is in bondage to the life-altering tragedy of the shipwreck. The guilt and sense of responsibility weigh heavily on his gym-buffed shoulders. When he once again tells Lauren he’s sorry he couldn’t save her sister, she waves it away: “You apologized already.” “It will never be enough,” he replies. And apologizing never is enough to assuage guilt until one has earned redemption and forgiveness through one’s right actions. The burden has given his life purpose.

Although Arrow suffers from soap opera-quality acting and writing (in all fairness, it isn’t aiming to be anything more than a cinematic comic book), it has a great look and the action scenes are very well done. But most importantly, its message of earning redemption and forgiveness through right action hits the bullseye.