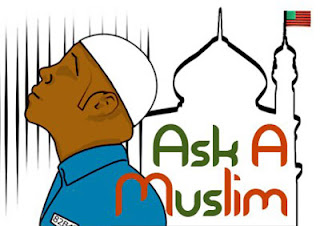 “Ask A Muslim” is a new internet video series that “showcases the current face of Black Islam in America today.” With its light, upbeat tone, its soundtrack of soulful grooves, and perpetually smiling faces gleaming with professionally whitened teeth, it’s designed to present an easygoing, non-threatening setting in which Americans can get the reassuring truth about the Religion of Peace.™ Unfortunately, you won’t find straight answers here. Nor will you find, at least thus far in the series, enough of the most pointed questions that Americans who are legitimately alarmed about Islam truly want addressed. What you will find is a lot of obfuscation and condescension.

Produced by the Black Public Media Network, two episodes of the series have been released so far (the first is just under seven minutes, the second just under nine). It uses man-on-the-street-style questions directed to a recurring handful of black Muslim artists, writers, imams, and “cultural observers.” Random (presumably) individuals are filmed asking their questions with the world-famous LOVE sculpture in Philadelphia prominently displayed over the questioner’s shoulder.

Episode one eases viewers into the series with superficial questions about Muslim “otherness” like, “Why do Muslim people have gigantic, bushy beards?” and “Why do Muslim women cover themselves to varying degrees, even their faces?” To the latter question, Dr. Su’ad Abdul Khabeer, an assistant professor of Anthropology and African American Studies at Purdue, replies that Muslim dress for women is “about modesty, but it doesn’t prevent you from sort of expressing yourself personally or feeling beautiful.” Except in regions oppressed by sharia, where women express themselves and their physical beauty at risk of their lives. “Muslim women just wear the clothes that they wanna wear!” exclaims comedian Omar Regan. Try telling that to the morality police in Iran, who drag women off to jail for sporting western haircuts or jeans, or to the enforcers of the Committee for the Promotion of Virtue and the Prevention of Vice in Saudi Arabia. For that matter, try telling it to the victims of honor killings in America who simply wanted to be like their non-Muslim friends.

“What do real Muslims think about fake Muslims?” one young man asks in episode two. Huh? You get a shot at asking a “real Muslim” for the truth about Islam and that’s your question? In any case, the respondents ramble vaguely but pleasantly, eventually acknowledging that “fake Muslims make our religion look bad.” But without a definition of “fake,” this answer is meaningless. Next question.

“Why do people convert to Islam in jail?” Good question. Most of the respondents softpedal about people in jail having time for self-reflection and finding “fulfilling answers” in Islam. A couple of others surprisingly and correctly note that attaching oneself to the prison Muslim population helps ensure your protection there. Dr. Khabeer steers her answer toward black Americans who “find themselves incarcerated unjustly,” which would seem to have nothing to do with Islam per se.  There’s no mention of the fact that Muslim prisoners now benefit from special dietary and other privileges, or that there is very purposeful, aggressive Muslim recruitment going on among violent criminals whose brutal anger can now be channeled against the infidel society whose illegitimate laws are not Allah’s laws.

Halfway through episode two, we come to a critical question: “What is sharia law?” Singer/actress Sumayya Ali smilingly replies, “Sharia law is a loaded word these days.” No kidding. Why might that be? Congressman Keith Ellison, a friend to the Muslim Brotherhood, vaguely suggests that people are scared unnecessarily because “some Muslims have promoted a false understanding of the idea.” He doesn’t specify whom or what’s false about it. “The purpose of it is just to promote human dignity, fairness, and justice.” Sounds great! Except that Islamic definitions of “human dignity, fairness, and justice” are not the same as western ones.

What are you infidels so alarmed about, anyway? “People are so scared of sharia law, it is crazy,” says comedian Regan, who is described as a “former member of S.O.A.,” a music group he co-founded. The site doesn’t explain that S.O.A. stands for Slaves of Allah. “I don’t even understand why you [sic] scared. Sharia law is actually a beautiful thing.” He is wearing a t-shirt exclaiming “Haram! Haram!” Haram, of course, is anything forbidden under sharia. Spoken word artist Amir Sulaiman asserts that “Sharia law is just to protect the sacred things, and the most sacred thing that God created is the human being, so it’s to protect the human being’s right to life, liberty, and pursuit of happiness.” He seems to be confusing sharia with the Declaration of Independence. Islam values none of those concepts as Americans understand them
.
The “Ask a Muslim” website calls Islam the “most misunderstood religion on the globe.” They don’t explain why that is: that they are trying to put a happy face on Islam while global jihad is inconveniently exposing it for the supremacist political ideology it is. They also don’t address why Islam is supposedly so dang difficult to understand despite the fact that after the 9/11 attacks, more non-Muslims than ever before have studied Islam to understand the religious motives of those who declared war on us. And yet we continue to be told by condescending apologists, including the speakers in this video series who treat their viewers like children, that we don’t understand the true Koran or the complexities of sharia, and that our concerns and criticisms stem from irrational fear. The problem always seems to lie with us. No other religion seems to be so intellectually impenetrable – not even Zen Buddhism.

It will be interesting to see what questions arise in subsequent episodes. But one remark unintentionally speaks volumes already. Dr. Jamillah Karim, assistant professor of religious studies at Spelman College, says in episode one, “We believe that the prophet Muhammad was the best human being, so we want to follow his model in every way.” And therein lies the contradiction: that we are expected to be reassured about a religion whose role model is a warlord who tortured, enslaved and slaughtered all who stood in his way, who advocated the genocide of Jews, who consummated his marriage with a nine-year-old, who ordered the stoning of adulterers, and who commanded that all must submit to Islam or die. Somehow I doubt that “Ask a Muslim” will honestly address that topic.