Caroline Glick: Israel on the Eve of U.S. Elections 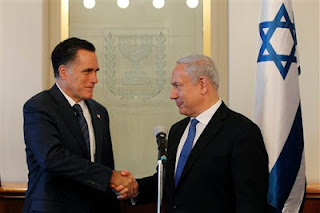 Monday night I attended an insightful presentation entitled “Israel on the Eve of the U.S. Elections,” given by Caroline Glick for the Los Angeles-based organization Children of Jewish Holocaust Survivors.

Glick is the Senior Contributing Editor of The Jerusalem Post and adjunct senior fellow for Middle Eastern Affairs at the Center for Security Policy in Washington D.C. The author of Shackled Warrior: Israel and the Global Jihad, she served as Assistant Foreign Policy Advisor to Israel’s Prime Minister Netanyahu in 1997-98, and regularly briefs administration officials and Congress on issues of joint American-Israeli concern. She also recently was appointed as the Director for the Israel Security Project at the David Horowitz Freedom Center.

Glick began her presentation with her perspective on Republican presidential candidate Mitt Romney’s recent visit to Jerusalem. It was very, very well-received, she said; in fact, he was “a breath of fresh air” – not because he made a candidate’s usual extravagant promises of support for Israel, but because “he lives in the real world,” where we acknowledge that the Middle East is extremely dangerous and the radiant “Arab Spring” is actually a much bleaker Islamic Winter.

Romney’s reassuring statements in Israel, such as his assertion that Jerusalem is the capital of the Jewish state, were in stark contrast to those of the Obama administration for the last three and a half years, Glick said. Obama has shown that he believes that the way to mollify the Muslim world is to put distance between the United States and Israel, deny that Jerusalem is the capital, take the Palestinians’ side in various issues, use the media to deter Israel from attacking Iran, and cozy up to the Muslim Brotherhood.

Romney endeared himself to the Israelis simply because he acknowledged basic truths about Israel and the Middle East: “The irony of the topsy-turvy times in which we live is that stating the obvious – such as the fact that Jerusalem is the capital of Israel – is enough to get you a standing ovation.”

By contrast, in Obama’s “fantasy world,” the reason jihad is rampant is that the United States has treated the Arab world poorly,

and if the United States turns on its allies and even on its own interests, and apologizes to its worst enemy, which is what [Obama] did on June 4, 2009 in his speech in Cairo, then somehow or another things are going to get better – that is, by being bad to yourself, by weakening your allies and empowering your worst enemy, you’re going to turn your enemy into your friend.

Glick pointed out that the Obama administration brought down the Mubarak regime in Egypt, our certainly imperfect but most important ally in the region, and one which had kept the peace for 30 years with Israel. Now the Muslim Brotherhood is in control. “What we have today in Egypt is a sea change on the magnitude of the Communist Revolution in China,” said Glick. After China turned Red, she said, “America was obsessed with the question, ‘Who lost China?’ Today, there’s no question that America lost Egypt, but our government doesn’t seem to realize the problem with that.”

After commenting on unsettling developments regarding the Egyptian military, Glick turned to the issue of Iran. The Obama administration has focused not on preventing Iran from developing nuclear weapons, but on preventing Israel from acting military to stop Iran’s openly genocidal nuclear program. Sanctions have not diminished Iran’s ability one iota, largely because 20 countries have been exempted by the Obama administration from participating in the sanctions. So Iran simply continues on its apocalyptic path unabated.
“We’re living in a very disturbing world,” Glick pointed out, “and unfortunately that world is being led down the garden path by an American government that is insisting on preventing people from seeing reality.” The Obama administration has purged the government vocabulary, for example, of “all the terms required to describe the reality” of our conflict with Islamic fundamentalism: “jihad,” “Islamic terrorism,” etc.

She condemned “J Street,” the Jewish lobby, for proclaiming politicians who don’t support a two-state solution to be “anti-Israel.” The two-state solution, Glick says, is “nothing but a recipe for war,” and this time, “the scale of war will be on a much greater dimension than in the past.” We have to look at other options for peace.

When asked about the threat from Turkey, Glick said it’s a very dangerous country partly because it’s a member of NATO and has the power to influence that body to move away from protecting Israel. This is something NATO never contemplated having to contend with – a scenario in which a NATO member is actually a potential enemy. Turkey also influenced the United States not to include Israel in a recent international counterterrorism conference. Turkey’s Prime Minister Recep Erdogan is “a Jew-hater” and “America-hater,” and yet Obama openly describes him as one of the world leaders whom he confides in most often and whose friendship he cherishes:

This is a disturbing thing because under Erdogan, the Turkish media, which has become a surrogate for the government, and the Turkish entertainment industry have become virulently anti-American, virulently anti-Israel, virulently anti-Semitic. Nobody likes to talk about these things, but this is a country that has put out popular television series, bestselling books, movies where Americans and Israeli Jews are portrayed as… just diabolical monsters. And nobody in the Obama administration seems to think that this should impact the way that America looks at the Turkish government.