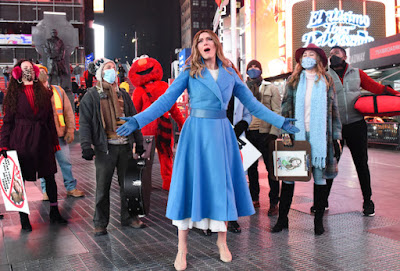 Remember those halcyon days of yesteryear when American comedians managed to poke fun at politicians on both sides of the aisle and make all Americans laugh together, instead of dividing us by mocking grotesque stereotypes of Americans in flyover country? Remember when late-night television was dominated by Johnny Carson, who managed to make clever quips about current events without descending into vicious snark aimed at half the country?

That is a distant memory, and our culture is immeasurably the worse for it. Now the Left enjoys total political domination in the field of entertainment, and late-night TV features a gaggle of uniformly leftist comedians/hosts who spent eight years refusing to mock Progressive Messiah Barack Obama, and the subsequent four years spewing increasingly angry nightly monologues about the Man Who Is Not Obama who occupied the White House until last week.

And not just Donald Trump, but his wife Melania as well, whom they despise because she is not Michelle Obama. In fact, The CBS Late Show, hosted by the eminently punchable and politically uninsightful Stephen Colbert, gave the First Lady an insulting musical sendoff Wednesday as she and her husband prepared to leave the White House.

Colbert’s comedy chops are only slightly less worthless than those of fellow propagandist/faux comedian Seth Myers from the NBC version of Colbert’s show, Late Night With Seth Myers. Myers, you may recall (but more likely not), is most notable as the unfunniest Saturday Night Live alumnus in the leftist propaganda outlet’s 45-year history.

But I digress. Colbert, as I was saying, decided an appropriate way to celebrate Kamala Harris’ new administration was by offering up a hateful roasting of Melania Trump the evening after her dignified farewell address. He began by slamming the former First Lady for not issuing a denunciation of the Capitol Hill violence earlier this month swiftly enough – not that anything would have been quick enough to satisfy the Left.

Then he introduced a taped performance from Broadway actress Laura Benanti, who has appeared on The Late Show a number of times doing a mocking impersonation of Melania. Benanti chewed up the scenery in an excruciatingly unfunny bit which included her (as Melania) announcing that she is “ditching that loser” Donald and returning to New York City. “Being here makes me feel, which is something that I don't normally do.” That lame joke is the level of wit that pervades the entire skit.

Benanti/Melania went on to perform an interminable, humorless parody of Belle’s number from Beauty and the Beast, set in Times Square itself, in which she sings about her love for New York – but the feeling is not mutual. “F--- you,” a pizza delivery man tells her while flipping her a blurred-out middle finger, as part of the skit. “You suck,” a construction worker spews. “F--- off,” a street caricature artist adds. “We hate her frickin' guts,” another New Yorker chimes in. A squad of dancers (all masked against the coronavirus, of course, in contrast with super-spreader “Melania”) bearing a placard reading “#BeGone” hurl kicks and fists her way in a choreography that reeked of barely-restrained violence against Melania. As if the message weren’t already clear enough, the dancers sing, “We hate you.”

It is stunning to consider how much time, effort, energy, and expense went into this mean-spirited performance, all for no other reason than to hurl unfair abuse at a First Lady who was already on her way out of the White House. Imagine how many higher-ups involved at CBS must have thought this was a great idea.

Colbert wasn’t the only petty, juvenile, showbiz jerk who reveled in mocking the departing Melania. Actor Tim Matheson, best-known for his role in the lowbrow John Belushi vehicle Animal House over forty years ago, astonishingly took a jab at her accent after the Biden inauguration, tweeting that it is “wonderful to have a first lady who can speak English.” This, about a woman who not only does speak English (more intelligently than Matheson), but four other languages as well. (How many does Matheson speak fluently, and without any trace of an American accent? His lengthy bio on IMDb doesn’t mention any). Imagine if Melania Trump were a Democrat, and a Republican entertainer ridiculed her accent. The Progressive howls of "Bigotry!" would reverberate throughout the land, and Cancel Culture would claim another victim.

And predictably, rubber-faced weirdo Jim Carrey, whose sad hobby is painting garish, disturbed portraits of Republicans he hates, released one of Melania on Wednesday on which he scrawled a goodbye to the “worst first lady.” The nightmarish mask of a face on the canvas bears no resemblance to the First Lady that is arguably the most beautiful in American history; of course, the painting is less of a representation of Melania Trump than it is of Carrey’s own tortured inner state.

The purportedly tolerant, inclusive, feminist Left reserves its most vicious hatred for conservative women and conservative blacks, two demographic groups deeply resented for not knowing their place on the identity politics plantation. The heinous crime of Melania in particular was to be married to the man who has done more than anyone else to expose the fathomless depths of Leftist hate, hypocrisy, and radicalism.

Her punishment was to be shunned by the media and the fashion industry, which sank to ugly depths to denigrate her (Melania even won a defamation lawsuit against one journalist who claimed she had been a prostitute) and never once allowed her to grace the cover of a magazine despite her obvious glamour and her actual career as a professional model. By contrast, the bitchy fashion biz fell all over itself turning Michelle Obama into a fashion icon featured on innumerable covers, including three times on Vogue, the Holy Grail of fashion mags. “If the Trumps were Democrats, Melania would be on every cover of every chic women's magazine in the world every month,” right-wing actor James Woods once correctly observed.

And if the Trumps were Democrats, the Left would have genuflected before Melania as a gorgeous, multi-lingual immigrant who brought style and class to the White House. But as it is, the Democrats can’t even be gracious enough to let her depart it in peace.