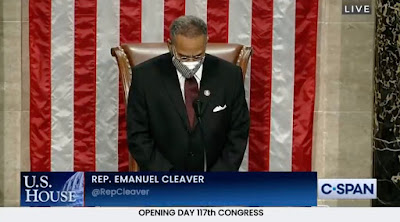 Democrat Rep. Emanuel Cleaver, who is also a pastor at St. James United Methodist Church of Kansas City, Missouri, delivered the opening prayer for the 117th Congress last Sunday. After invoking “the God known by many names and faith,” he closed the prayer, of course, with “Amen.” Then, in a moment of shark-jumping absurdity, he added, “and A-woman,” apparently ascribing gender to the word “Amen” and attempting to be inclusive of the female sex.

As a pastor (with a Master of Divinity degree, no less), surely Cleaver cannot be unaware that “amen” comes from Hebrew filtered through Greek and Latin, and means “truly” or “so be it.” Was he seriously suggesting that the word somehow excludes women? Even people who are ignorant of its etymology understand that “amen” is the traditional conclusion of a usually Christian or Jewish prayer and has nothing to do with the male sex. In addition to Cleaver’s theologically confused appeal to a “God known by many names and faith,” his “a-woman” remark was the most idiotic feminist virtue-signaling since the corruption of the word “history” to “herstory.”

Cleaver unashamedly shared a video of the prayer on social media and was swiftly and justifiably roasted on Twitter. “Bruh you do know what Amen means, right?” wrote one commenter. Another respondent tweeted, “’Amen and awomen’? Is there a stupidity contest this year in government?” To that, someone replied, “Cleaver is off to an early lead.” Newt Gingrich tweeted, “perfect House Democrat prayer ending as House Dems focus on gender security by abolishing virtually every normal gender term [like father and mother].”

What Gingrich was referring to was the new House rules package for the 117th Congress, approved in a 217-to-206 vote on Monday, which “includes sweeping ethics reforms, increases accountability for the American people, and makes this House of Representatives the most inclusive in history,” according to a statement from the Committee. The package includes the establishment of a “Select Committee on Economic Disparity and Fairness in Growth,” which will require Congress to “honor all gender identities by changing pronouns and familial relationships in the House rules to be gender neutral.”

“These future-focused proposals reflect our priorities as a Caucus and as a Country,” doddering House Speaker Nancy Pelosi proclaimed proudly when the rules were introduced last Friday. Well, they might reflect the anti-family, anti-science priorities of what used to be the lunatic fringe and is now the mainstream Democratic Party, but they certainly don’t reflect our priorities and values as a country.

Republican lawmakers rightly condemned the new language restrictions. “I’m a proud husband, proud father of a son and a daughter — they don’t even want you to be able to say that anymore,” said GOP whip Steve Scalise. “The Democrats rule package takes out words like mother and father and brother and sister in their quest to not offend anyone,” said Rep. Debbie Lesko. “They’re offending almost all of America.”

“Show me where it says in writing that we’re canceling Mother’s Day or that you can’t refer to yourself as a husband or father or mother or grandmother,” dared Rules Committee Chairman James McGovern, irked by the criticism. Well, his committee’s own rules specify in writing that, at least in Congress, you can’t refer to yourself or anyone else that way. As for canceling Mother’s Day – the anti-family left has been itching to eliminate Mother’s Day and Father’s Day for many years. Maybe Congressional Democrats will get around to prioritizing that in the next rules package.

By the House’s own measure, perhaps Rep. Cleaver should be censured for his exclusionary “amen” and “a-woman,” which did not “honor all gender identities.” That goes for Speaker Pelosi as well, for hypocritically continuing to identify as “mother, grandmother” in her official Twitter biography. Apparently it’s difficult for leftists to keep up with their own ever-shifting terminology of inclusivity.

“Give me a break. Enough is enough,” an irritable McGovern continued to protest his critics. “We have to stop this. And we have to focus in on solving the problems that face the American people.” Gee, if the Democrats feel such an urgency to address the problems Americans care about, a great place to start would have been the lifting of their own draconian coronavirus lockdowns, which have resulted in economic disaster for literally millions of Americans. Another great place would have been supporting the Republican investigation of widespread voter fraud in the November election, an issue that is tearing this country apart. Perhaps the Democrat leaders also could have addressed violent crime or immigration or any other issue that ranks high among American concerns.

Instead, House Dems prioritized this inane issue of gender inclusivity because these elites know better than their constituents what is important – and what is important to these Marxists is, as Karl Marx himself preached, the abolition of the family. Eradicating or obfuscating language that denotes traditional familial bonds goes a long way toward promoting that agenda, because if terms such as “father” and “daughter” are rendered unacceptably exclusive against narcissists who “identify” as some gender other than what they were “assigned” at birth, then it becomes easier to cloud our understanding of family roles and even to demonize traditional families themselves.

Despite Committee Chairman (shouldn’t that be Chairperson? Or is “per-son” also sexist toward women?) McGovern’s insistence that “we made this change for the sake of inclusion, not exclusion,” the truth is that the new House rule was made precisely for the sake of exclusion – excluding the vast majority of Americans who aren’t onboard with the radical left’s relentless assault on the traditional definition of family.

Congressional Democrats voted to legitimize this not-insignificant step in that assault because, as Hannah Arendt, the foremost scholar of totalitarianism, has noted, totalitarians aspire to nothing less than defining and controlling reality. A perfect demonstration of that is the totalitarian left’s subversion of family relationships, their manipulation of the language to erase sex distinctions and roles, and their denial of biological reality.

Americans who care about the future of our country and of our civilization itself must resist the left’s anti-family totalitarianism at every turn and at any cost. And that resistance begins with rejecting their perversion of language, science, and truth. Amen to that.