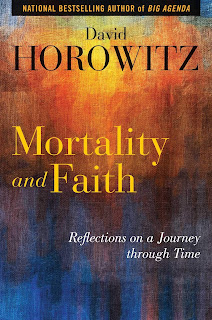 In 1996, David Horowitz published Radical Son: A Generational Odyssey, which became the most noted autobiography of political conversion since Whittaker Chambers’ Witness nearly half a century earlier. Like Horowitz himself, the book became and remains a conservative classic.
The founder of the David Horowitz Freedom Center passed his 80th birthday earlier this year and has just released a less political and more meditative autobiographical follow-up to that iconic work: Mortality and Faith: Reflections on a Journey Through Time. This book collects three* of Horowitz’s previous observations on life, death and meaning, titled The End of Time (published in 2005), A Point in Time: The Search for Redemption in This Life and the Next (2011), and the arrestingly-titled You’re Going to Be Dead One Day: A Love Story (2015), together with a short concluding chapter fittingly called “Staying Alive.” As Horowitz puts it in the new book’s preface, Mortality and Faith explores the beliefs which we embrace to answer the existential questions of our lives, and how we are impacted by those answers.
Readers who are familiar only with David Horowitz the political firebrand, the political general who preaches a take-no-prisoners strategy to combatting his former comrades on the left, may be surprised to discover that he is capable also of a disarming sensitivity, vulnerability, and personal honesty. He does not flinch from self-criticism nor engage in self-mythologizing, which is refreshing for a public figure, particularly in the arena of politics. Every page of Mortality and Faith is redolent of a battle-scarred wisdom, earnestness, and humility earned from trials and tribulations both public and private.
Though one gets the impression he might have wished otherwise, a belief in God is not a sustaining or consoling worldview for Horowitz. He freely confesses that his philosophy of life and death stem from a melancholic agnosticism. In You’re Going to be Dead One Day he declared that “All questions about death begin with observations that only a religious faith can answer. I have no such faith,” he says, “and therefore my posing of these questions is without a hope that life eternal awaits us where all will become clear.”
What compelled the political writer/activist Horowitz to address these existential questions in the first place? In an interview I conducted with David upon the publication of his book A Point in Time, he described his first meditative work The End of Time as a response to a diagnosis of prostate cancer shortly after the 9/11 Islamic attacks. That potential death sentence “brought me up against the wall of my own mortality”:

I was fortunate enough to survive this round in a war we are all destined lose, but it changed the way I looked at myself and the world. It caused me to step back and take in our human predicament, and to think about how we address it. The book I then began to write about these matters was different in both substance and tone from the other books I had written.
Like The End of Time, it’s sequel (if you will) A Point in Time – Book II in Mortality and Faith – is part memoir and part reflection, “a summing up of what I have learned over the course of a lifetime.” It draws upon philosophical sources from Marcus Aurelius to Fyodor Dostoyevsky to examine the “no-win situation” of our mortality, to wrestle with the fact that our lives are meaningless and that, like Shelley’s crumbled Ozymandias, one day all our works and fame, if we have earned any, will be forgotten. To deal with this sobering reality of our “irrelevance,” to uphold our frail human existence, Horowitz posits that the best way to make sense of our lives is “by inhabiting stories that have no end,” and by living inside them. Those stories can sometimes be lies; for example, ones such as those his hardcore Communist parents told themselves about a glorious collectivist future awaiting mankind.
Book III, You’re Going to be Dead One Day, is curiously subtitled, “A Love Story.” That story belongs to Horowitz and his wife April, whose ceaseless devotion, optimism, zest for life and spiritual faith have sustained Horowitz far beyond what otherwise likely would have been his allotted years on earth. Her influence and support shaped a meaning for his life despite his absence of faith:
I have lived my life as though my actions meant something and everything would add up in the end. Without thinking about it, I have had a conviction so deep it might have been encoded in my genes – that while there may not be providence in the fall of a sparrow, as Hamlet supposed, there is nonetheless a purpose to our ends. Thought I cannot articulate it, this purpose causes me to conduct myself as though my wife, not I, were right.
The final chapter of Mortality and Faith, “Staying Alive,” centers on Horowitz’s struggle with an aggressive resurgence in 2015 of the prostate cancer he had lived with successfully for 14 years. And yet he devotes a significant portion of the book’s closing to a testimonial to his friend Eddie Snider, founder of the hockey champion Philadelphia Flyers and the owner of a far-flung sporting empire. Snider played a major supporting role in the story of Horowitz’s more recent victory over cancer, all while Snider battled cancer himself, to which he tragically succumbed in 2016. Horowitz details numerous examples of Snider’s kindness, generosity and selflessness, characteristics recognized by all who knew him. “It caused me to wonder,” Horowitz marveled, “how a man who was such a world conqueror and visionary could be this kind of man as well – one who felt, and was able to take in, the needs of others who were not instrumental to his plans. Eddie had done so to such a degree that I felt shame when I thought about it, because I had tried all my life to be someone like that but had fallen so short of his mark.”
For a man who had expressed many times the belief that our lives are ultimately transitory and meaningless in the grand sweep of things (Mortality and Faith itself begins with a Kafka epigraph: “The meaning of life is that it stops”), Snider’s selfless, dignified example left Horowitz deeply “impressed by Eddie’s advice that if you are productive for others you will feel good about yourself” – and thus your life will have meant something to those touched by it. “I had lived long enough to know that it is the life we encounter directly that sustains us, and the people we are close to,” Horowitz concludes. “On this front, I could not have felt more fulfilled or happier.”
Mortality and Faith bears witness to a truth that can be embraced by young and old, believers and non-believers, conservatives and liberals: in the face of life’s many – sometimes Herculean – trials, the best way to infuse our lives with meaning “is not to be daunted by the darkness, but to press on,” and to measure our impact in the world not by the faux immortality of renown but by the light we bring to those around us.
* A fourth personal work, A Cracking of the Heart published in 2009, was Horowitz’s heartbreaking elegy for his late daughter Sarah, a volume not packaged with the others in Mortality and Faith because it was less a portrait of his life than hers.
From American Thinker, 6/16/19
at 3:55:00 PM