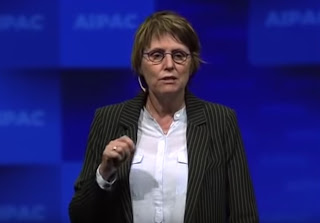 On December 18, 2010, two female friends – one Christian and the other Jewish - were hiking together in the hills of Jerusalem when they were accosted by a pair of members from a Palestinian terror cell. Both women were bound and hacked with machetes until the Christian, Kristine Luken, was dead and the other seemingly so.
But in an incredible display of a bottomless will to live, Kay Wilson – with thirteen machete wounds, a crushed sternum, multiple rib fractures, bone splinters in her lungs, a dislocated shoulder and broken shoulder blade – got up and walked over a mile barefoot, bound, and bleeding until she reached help. She survived to testify against her assailants in court. The reason the pair was caught was that Wilson had managed to stab one in the groin with a penknife during the assault, and investigators linked him to the DNA in his blood on her clothing. The two monsters, who were convicted of other crimes as well, including stabbing another Jewish woman to death earlier that same year, were imprisoned for life.
The Rage Less Traveled: A Memoir of Surviving a Machete Attack is Kay Wilson’s relentlessly gripping, intensely personal story. You can find it on Amazon here (and here on audiobook) where the book has racked up dozens of exclusively 5-star reviews. Simultaneously raw and poetic, transcendent and unsentimental, The Rage Less Traveled is not a predictable book about learning to forgive your attackers or seeking interfaith dialogue with members of a Jew-hating ideology. The book acknowledges that evil exists and that there can be no coexistence with it. It is a story about the tortuous road through survival into the light. As Wilson said in her 2019 AIPAC address, “My story is Israel’s story.”
Ms. Wilson kindly agreed to answer some questions about the book and her shocking experience.
Mark Tapson:           You wrote that the media’s initial explanation for the attack on you and your friend Kristine Luken was that it was in retaliation for Israel’s assassination of a Hamas commander. But what was the real reason?
Kay Wilson:       According to the police footage they filmed when they took the murderers back to the crime scene, the terrorists state very clearly, “We wanted to kill Jews.” When the police asked for what reason, he responded, “For no reason.” I heard that in court too. When asked, he answered with an apropos of nothing, as if peeved that he murdered a Christian instead of “getting the Jew.”

MT:        Having your terrorists imprisoned wasn’t the end of the ordeal for you, because when the news broke that the kidnapped Israeli soldier Gilad Shalit might come home through a prisoner exchange, you feared that your assailants might be among those released. Can you give us your thoughts on such prisoner exchanges and the mixed feelings you had about this one in particular?
KW: It’s easy to express glib yet sincere opinions until the implications of a political decision actually happens to you. Politics that touch deeply our lives is far more complex than just facts or expressing an opinion. Hence, I was both thrilled and moved for Corporal Schalit and his parents, yet conversely terrified and resentful that the exchange of cold-blooded murderers for his release, may include the people who attacked me. The release opened up my world to the incalculable suffering of those who have had their loved ones murdered. For a change, it wasn’t just all about me.
I am not a politician, or a leader, or have access to all the intelligence that is needed to reach a decision concerning prisoner exchanges or any other decisions. With that said, and with emotions aside, to me it is clear: releasing un-remorseful terrorists who are bent on doing their same deeds again, not only leaves more families bereaved, but is politically counter-productive because it encourages future kidnappings.
MT:        On the book’s website you note that every publisher to whom the book was submitted acknowledged that it is extremely well-written and “a page-turner,” but none had the guts to publish it. You mention that one publisher in particular had the nerve to suggest something rather outrageous about the book. Can you tell us about that?
KW: Firstly, I was encouraged and frankly flattered that every major New York publisher said it was beautiful written and a page-turner. That is a compliment. I had to work very hard at writing. Writing doesn’t come naturally to me. Every word, comma and colon felt like hell. This one publisher rejected my book on this basis that I did not talk about my “subsequent charitable work for young and impoverished Palestinians.” Because of this, they said, “I’m sorry to say then, I am going to pass on this one.”
I was working with an agent so I had no direct contact, but I would have liked to tell them a few things. Firstly, my memoir, like all memoirs, is about the author and not about other people. Secondly, have they never heard of a second book? From a professional and literary point of view, who I am now and what I am doing now has a different tone, weight and voice, to the unspeakable trauma and hell I have gone through for years. It would have been completely inappropriate to put that in my memoir. Thirdly, to use the “young and impoverished Palestinians,” on the back of me being butchered nearly to death in which I witnessed a woman chopped up before my eyes because her executioners thought she was Jewish, is frankly obscene. Clearly, what happened to us doesn’t fit into their narrative of the "brutal Israeli occupation” and the “cycle of violence.”
These people are virtue-signalers and cowards. If I would have been a trans, black, Muslim Palestinian, who had been attacked by white Jewish settlers, there is no reason my book would be on the bestsellers list. It is written well, readable, a page-turner, my story of survival is off the charts, and at the most basic level, facing death as I have, is a matter of curiosity for people. Facing death is a subject that sells.
MT:        In the book’s epilogue you note that the Palestinian Authority (PA) pays out salaries to thousands of incarcerated terrorists, including your assailants, and that these rewards come from funds donated by foreign governments, including the UK. What has been the official response to your efforts to put a stop to this practice?
KW: Together with scrupulous and tireless work of Palestinian Media Watch, I have had the privilege of being instrumental in the Dutch government reducing their foreign aid by 7% to the PA (the sum they take from their general budget to pay the murderers’ salaries). We are working on other European countries now and see some remarkable progress.
As a dual citizen of both Israel and the United Kingdom, I lobbied the British government as an individual. I sent a letter to every single MP [Member of Parliament] along with photos of my gruesome injuries, yet only a handful replied, expressing the “British government’s commitment to a two-state solution.” I was not writing them about a two-state solution. I was writing to tell them that my own family in England are paying my would-be murderers a salary from their taxes. There are MP’s who have knowing mislead parliament and continue to lie about where the foreign aid ends up. I am disgusted by the British government. Clearly, with immoral politics such as this, and a total disregard for evil, Great Britain is hardly “great” anymore.
From Frontpage Mag, 5/23/19
at 9:42:00 AM