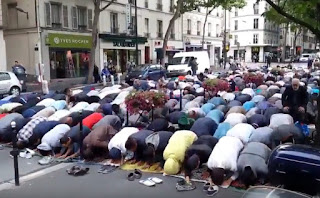 Years ago as I was awakening from my long Democrat slumber and educating myself about Islam, one of the most eye-opening books that I read was a 2006 page-turner titled While Europe Slept: How Radical Islam is Destroying the West From Within, by a gay American living in Western Europe. Not only was it enlightening, but it made me an instant fan of Bawer’s compelling storytelling. In addition to following his subsequent books such as Surrender: Appeasing Islam, Sacrificing Freedom, The Victims’ Revolution: The Rise of Identity Studies and the Closing of the Liberal Mind, and even a thriller about Islamic terrorism called The Alhambra, I was fortunate and honored to become friends with Bruce through our mutual work for the David Horowitz Freedom Center.
Now Bawer has released a new volume with a stark black cover titled Islam: The Essays, a massive collection of well over three hundred of his articles on this crucial subject dating from the fall of 2002 through the summer of 2018. Though he suggests that the reader undertake the book chronologically in order to understand the evolution of his understanding of the topic (“Early on, for instance, I refer to ‘fundamentalist Islam’; soon enough, I drop the word ‘fundamentalist,’ having realized that Islam itself, properly understood, is fundamentalist.”), Bawer is such an engaging, perceptive writer that one can open the book at random to literally any page and find it impossible to stop reading. A chilling chronicle of the Islamization of multicultural Europe over the last 17 years, Islam: The Essays is a must-have for FrontPage Mag readers and for others in need, like I once was, of awareness and insight into the Religion of Peace™.
Bruce Bawer was able to find time to answer a few of my questions about the book and about the Islamization of Europe today.
Mark Tapson:             Bruce, you note in your opening essay that it wasn’t until you moved from your native New York to Western Europe in ’98 that what you then called “fundamentalist” Islam became a daily reality for you. How was that daily reality different, and how long did it take you to fully grasp what the Islamization around you meant for Europe and the West? Was there any particular incident that showed you the writing on the wall?
Bruce Bawer:             I moved from New York to Amsterdam in September 1998. First I rented a one-room flat in a beautiful part of central Amsterdam, not far from the Rijksmuseum. I spent much of my time wandering around the city and glorying in it, and saw nothing that dampened my enthusiasm. A day or two after New Year’s 1999 I traded up to a charming walk-up in a classic old townhouse on the Oude Schans canal a few blocks east of Dam Square. The view through the high windows was spectacular; again, everything seemed hunky-dory.