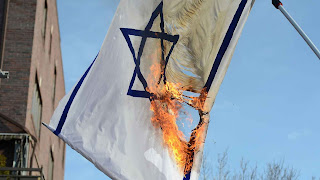 In recent weeks the mostly left-leaning news media have published articles about the turbulence of this year’s elections in Israel with such handwringing titles as “Is the Israeli left doomed to marginalisation?,” “The Decline of the Israeli Left,” and “Whatever Happened to the Israeli Left?” But if one really wants to educate oneself deeply and broadly about this shift in the tiny democracy’s political landscape, one can hardly do better than to read Mordechai Nisan’s new book, The Crack-Up of the Israeli Left, published by Mantua Books. In it, Dr. Nisan brilliantly dissects the rise of the Right and the decline of the Left in the Jewish state. To quote from the book cover’s description, it details how “the Left detached its moorings from reality and principle, raised its voice against the Zionist enterprise, and chose surrender to the Arab enemy.”
If anyone is qualified to expound upon Israel’s political and cultural battlegrounds, it’s Mordechai Nisan. Dr. Nisan (with a doctorate in Political Studies from McGill University) has been a teacher and consultant for a number of academic and public institutions in Israel, including Hebrew University in Jerusalem, where he taught Middle East Studies for 35 years. Among his many books are Toward a New Israel: The Jewish State and the Arab Question (1992), Only Israel West of the River: The Jewish State and the Palestinian Question (2011), and Politics and War in Lebanon (2015). He has written articles for The Jerusalem Post, Israel National News, Global Affairs, Middle East Journal, and many other publications. He has also been an activist for Jewish settlement in the territories of Judea and Samaria.
Dr. Nisan was kind enough to take time to answer some questions for FrontPage Mag.
Mark Tapson:             You begin your book by describing Israel as “a fable and a myth, but also a Great Truth.” What do you mean by that?
Mordechai Nisan:    Myth as an expression of inner thoughts and memories mobilizes people to action. Fables arouse children's imagination, as myths do for adults. Israel was born from a great myth rooted in the Biblical story of liberation and conquest, awakening the Jewish people to relive their past through the medium of Zionism and reconstituting their freedom and sovereignty in modern times. This is a revitalized myth actualizing an ancient truth of God and Jewish peoplehood in history.