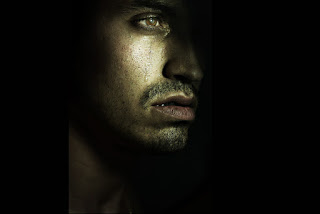 
British TV personality Piers Morgan tweeted that the GQ interview made him cringe and that Pitt needed to “man up.” (In an earlier tweet, Morgan wrote, “I'm not convinced by this new trend of male public soul-bearing [sic]. Time for our gender to get a grip, methinks. Life's tough – man up.”) Lewinsky took Morgan to task in her article for his “antiquated sense of masculinity”:

What Morgan failed to acknowledge was the sea change that has occurred over the past generation: to “man up” and to be a “real man,” among young males of courage and conviction, now go hand-in-hand with expressing raw emotion, acknowledging flaws, opening up, facing consequences.

Lewinsky also applauded rapper Jay-Z for confessing to infidelity in his marriage to Beyoncé. “[H]e chose a path of candor that will—like Brad’s and Prince Harry’s—move the conversation forward and help others,” Lewinsky writes. “It is a refreshing and bracing antidote to see male icons convey vulnerability” rather than “projecting an outmoded caricature of manhood.”

This notion that traditional male stoicism constitutes an “outmoded caricature of manhood” is a constant refrain in discussions of masculinity today. The cultural elites like the editors and contributors of Vanity Fair scorn that stereotype. The new ideal they seem to be promoting in its stead is a man narcissistically absorbed in exploring his own feelings, a man neutered of the outward-looking drive for achievement and adventure, and yes, even the capacity for violence that are part of his nature.

There is a reason that men traditionally are more emotionally reserved than women: throughout history men have been the providers and protectors, the hunters and warriors, the builders and trailblazers, and those duties demand no small measure of emotional toughness and restraint. That is no less true of life in today’s urban jungle.

In fact, at least one recent study demonstrates that emotionality may protect women from stress but does not protect men from it. Men, the study concludes, best combat stress through self-control. And frankly, no matter how loudly a minority of voices in the culture declare otherwise, most women don’t want a man who needs to be cuddled every night after work to keep it together. Women want a husband and a father for their children whom they can count on to be a pillar of strength and resilience in times of stress, emergency, and danger.

Naturally, it’s not healthy for a man to keep everything bottled up. Men should be emotionally secure enough to be privately vulnerable with the right people in their lives when necessary, but Piers Morgan has a point when he says that there is something unseemly and unmanly about men baring their soul publicly. All of this cultural pressure for men to reject their masculinity, confess their sins, and denounce their former unenlightened selves smacks of Chinese Cultural Revolution re-education. It’s demeaning.

Amid all the noisy calls today to eradicate “toxic” masculinity, it’s easy to forget that being a man, or a good man anyway, is not a measure of how macho or in touch with one’s feminine side a man is, but about the values he lives by and how committed he is to upholding them.

With that in mind, those who believe that masculinity itself is the problem and who want to feminize men emotionally are missing the mark. An emasculated culture is a doomed culture. The aim should be to encourage our young men to embrace their masculine nature while teaching them to tame it and temper it with virtue and character and wisdom. Sure, make room for vulnerability (just not enough to wallow in it), and focus instead on cultivating a righteous strength. Now that’s a manly new frontier.