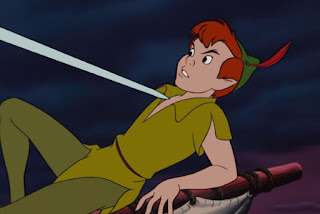 In 1983 The Peter Pan Syndrome, a pop psychology book which examined the phenomenon of men who seem locked into perpetual adolescence, struck a chord in the culture and became a bestseller. Nearly thirty-five years later, the phenomenon doesn’t seem to be any less prevalent. Now a recent op-ed for The New York Times suggests that there is an ugly racial and sexist dimension to it as well.
In “The Men Who Never Have to Grow Up,” Jennifer Weiner complains that Americans have a soft spot for such “manolescents” – as long as they are white. We are charmed by roguish “good ole boys,” she says, and excuse even their crimes as mere boys-will-be-boys hijinks, but we don’t extend the same amused tolerance to nonwhites and women.
As examples, Weiner lists YouTube clowns Rhett McLaughlin, Link Neal, and Colin Furzelike, all in their late thirties; radio and TV stars Ryan Seacrest, Chris Hardwick, and Billy Bush, all in their early-to-mid-forties, who “have ridden boyish charm into lucrative ubiquity”; and swimmer/reality star Ryan Lochte, 32, whose drunken vandalism during the Rio Olympics was forgiven by officials even after he invented an armed robbery to cover for it.
In graver examples, Weiner cites Stanford swimmer Brock Turner, convicted at 20 of sexual assault but given a slap on the wrist by a judge concerned about how the conviction might impact the young man’s future; the late Ted Kennedy, who was 37 when he abandoned Mary Jo Kopechne to die in the car he drove off a bridge on Chappaquiddick Island, for which he received a mere two-month suspended sentence; and 39-year-old Donald Trump, Jr., whom Weiner accuses of colluding with the Russians to skew the 2016 presidential election.
Weiner’s argument is that these examples demonstrate a “potent precedent about how we’ve been taught to see whiteness and maleness and when — if ever — we expect boys to become men.”

She is half-right. Weiner neglects to mention that those on the political right never let Kennedy off the hook for his lethal negligence, or that nationwide outrage accompanied the miscarriage of justice in Turner’s sentencing, or that Trump, Jr. has been found guilty of absolutely no wrongdoing. Her claim that America treats bad behavior casually when the perps are white males simply doesn’t hold water.
Her op-ed goes entirely off the rails when she names Tamir Rice as her sole black example that “nonwhite men don’t have it quite as easy.” She states that the 12-year-old Rice, who was shot by police officers in late 2014, was killed “for the sin of playing in the park with a toy gun,” and “their excuse was that they thought he was an adult suspect.”
It wasn’t an excuse. Rice may have been a pre-teen, but he stood 5’7” and 195 lbs. and the officers did not know when they arrived on the scene that they might be dealing with a juvenile or that the gun he reached for in his waistband was only a pellet gun. The “toy” Weiner references was a realistic replica of an actual handgun, missing the orange safety tip that would have marked it as non-lethal. As tragic as the shooting was, Rice was not killed because our culture doesn’t allow nonwhite men to be naughty. One senses that Weiner is simply attempting to gin up racial outrage.
Her point that women in the orbit of man-boys end up either having to be the adults or being victimized by them has merit, however. If grown men shamefully refuse to grow up, someone has to be the adult in the room, and that responsibility too often today falls to their mothers, wives, girlfriends, or even daughters.
That brings us back to Weiner’s larger point that a strain of Peter Pan syndrome still infects American manhood. You can see it in evidence in our young men who are more committed to gaming consoles than to finding a purpose for their lives, and in the increasing numbers of men postponing or entirely eschewing marriage and fatherhood. This purgatory of adolescence is perpetuated by the relentless messaging of pop culture that grownups and maturity aren’t cool.
Not every young American male has succumbed to this condition, of course – far from it – but it is a trend with often devastating consequences for those who have. How do we combat it? There’s not a simple solution, but following are a couple of steps that would make a good start.
First and foremost, it comes down – as nearly every social issue does – to the values taught early in the home. It is vital to instill in our boys the habit of hard work, a sense of personal responsibility, the self-respect that comes from achievement in the real world, and a confidence and optimism which encourage men to step out in the world to build families and futures.
Another step – easier said than done – is to steer our young men (and young women too, for that matter) away from taking their behavioral cues from our ubiquitous pop culture, which since the 1960s has idolized youth, rebellion, and irresponsibility. “I hope I die before I get old,” sang The Who’s Roger Daltrey in 1965 (ironically, he is now 73 and still performing). It’s one thing for that battle cry to resonate with 16-year-olds, but it’s not an especially productive motto if you’re 29 and still living at home.
America’s Peter Pans need to accept that life is not an endless spring break, that Leonardo DiCaprio and Johnny Depp may not be the best male role models, and that there are more important and more fulfilling dreams to pursue than the hedonistic mirage of fame and fortune which pop culture dangles before them.
From Acculturated, 7/31/17
at 12:21:00 PM