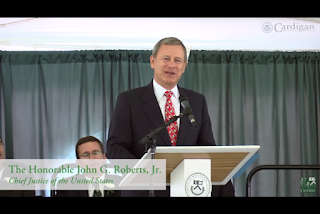 Commencement addresses typically urge graduates to look to the future, and contain bland, predictable nuggets of inspiration such as “reach for the stars,” “change the world,” and these days, “#Resist Trump!” But Chief Justice John G. Roberts Jr. upended expectations when he delivered the commencement address for an elite boarding school last month; instead, he wished the graduates failures and setbacks, and emphasized a couple of virtues that have fallen out of style in American culture: humility and gratitude.
Roberts’ address at the Cardigan Mountain School in Canaan, New Hampshire, for boys grades six through nine, didn’t attract much attention at the time, but it has been gaining traction since being uploaded to YouTube. Even The Washington Post, no ideological ally of the conservative Chief Justice, recently published an admiring article about the speech.
What many are finding noteworthy about the twelve-minute talk is that Roberts touched on neither politics nor the law in it, although each of the graduates did receive an autographed, pocket-size Constitution along with his certificate, according to the Post. “Instead,” wrote the newspaper, “the address was personal, understated and popular probably because it touched on universal themes, such as a parent’s worry about whether he or she is making the right decisions for their child.”
He began by inviting the students to rise from their seats and applaud the parents for their sacrifice. He painted a touching picture of those parents dropping off their young boys at the beginning of their time at the school and returning home on a “trail of tears” to an “emptier and lonelier house.” That image was all the more poignant because Roberts’ own son was among the graduates that day, and that personal element is what gives this speech its moving, bittersweet edge.
He went on to say that commencement addresses customarily ask students to look forward, but looking back is just as important, as is looking around at the fellow students they could now call “brothers.” But surprisingly, he did not wish the boys good luck going forward; instead, he thought it better for their character to experience their fair share of the setbacks and pain that the real world would inevitably present to them:

“From time to time in the years to come, I hope you will be treated unfairly, so that you will come to know the value of justice. I hope that you will suffer betrayal, because that will teach you the importance of loyalty. Sorry to say, but I hope you will be lonely from time to time, so that you don’t take friends for granted. I wish you bad luck — again, from time to time — so that you will be conscious of the role of chance in life, and understand that your success is not completely deserved, and that the failure of others is not completely deserved, either.”
Instead of advising them to “be themselves” in life, Roberts hoped they would strive “to become something better.” He reminded them to live a good life, not the good life. He emphasized that the students are “privileged young men... My advice is: Don’t act like it.”
At your next school, he said, introduce yourselves to the people “raking the leaves, shoveling the snow or emptying the trash.” Always call them by name, smile, and say hello. That kind of humble mindfulness is crucial for keeping a sense of perspective about one’s life, a perspective that success and privilege can distort.
Roberts ended with the words of “the great American philosopher, Bob Dylan.” He quoted from Dylan’s song “Forever Young,” written for his own son Jesse. The lyrics are “beautiful, they’re timeless, they’re universal,” Roberts said, but they are “a parent’s lament.” Among them:
May God bless you and keep you always
May your wishes all come true
May you always do for others, and let others do for you
May you build a ladder to the stars
And climb on every rung
And may you stay forever young.

These words are a parent’s lament because our children cannot, of course, stay forever young and remain untouched by life’s cruelties and misfortunes, which we would do anything to spare them. The boys leaving Cardigan Mountain School have not even reached the cusp of manhood yet (although it is never too early to steer them toward being good men, as Justice Roberts was trying to do). Right now their lives are full of youthful promise and hope. But time marches on, so all that these – or any – parents can do is pray that they have prepared their children sufficiently before releasing them into the world, to meet life with courage, humility, and strength, until one day they are parents themselves, guiding their own children toward becoming, as Justice Roberts said, something better.