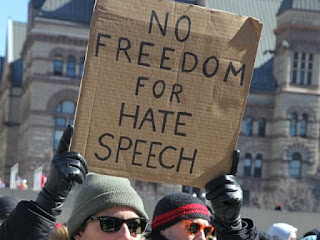 Now illiberals want to take the concept of hate speech to the next level, redefining the word “violence” to include emotionally hurtful language, and Barrett and the New York Times are attempting to legitimize this scientifically.
Barrett’s premise is that words can have “a powerful effect on your nervous system.” The stress they cause can “make you sick, alter your brain — even kill neurons — and shorten your life.” Thus “certain types of speech… can be a form of violence.” She notes that this concept is the sort of thing that has led to campus controversies about “microaggressions,” which have “stuck [sic] many as a coddling or infantilizing of students, as well as a corrosive influence on the freedom of expression necessary for intellectual progress.”
Yes, that is precisely what all this politically correct umbrage about “safe spaces” and “trigger warnings” is: coddling and corrosive. But it is also more than that; it is an insidious strategy to shut down ideas and people that the left wants to demonize as not simply unworthy of debate but as dangerous and evil.
Barrett believes she offers a scientific rationale for “which kinds of controversial speech should and shouldn’t be acceptable on campus and in civil society. In short, the answer depends on whether the speech is abusive or merely offensive.” The latter has no adverse physical effects, but what she calls abusive speech triggers “the kind of stress that brings on illness and remodels your brain. That’s also true of a political climate in which groups of people endlessly hurl hateful words at one another, and of rampant bullying in school or on social media. A culture of constant, casual brutality is toxic to the body, and we suffer for it.”
Few would disagree that our political discourse today is toxic, but labeling it violence is a bridge too far (except, of course, for actual incitement to violence, which is already excluded from First Amendment protection). Barrett actually calls it “reasonable, scientifically speaking, not to allow a provocateur and hatemonger like Milo Yiannopoulos to speak at your school. He is part of something noxious, a campaign of abuse. There is nothing to be gained from debating him, for debate is not what he is offering.”
That is utterly false. It is not Milo who isn’t interested in debate; it is the politically correct bullies of the left, who have jettisoned intellectual debate because they know they cannot compete with conservatives on the level playing field of reasoned argument. The reason the left has nothing to gain from debating him, as Barrett claims, is not that he is unwilling to debate but that he crushes opponents in debates. That is why the left prefers to employ Saul Alinsky’s strategy of the politics of personal destruction.
Having dismissed Milo as a hatemonger unworthy of consideration by decent people, Barrett moves on to casually dismiss the political scientist Charles Murray as a racist – although his speech isn’t violent, she concedes, merely offensive. It’s revealing that Barrett didn’t offer up examples of hate speech or racism from the left; why not use the anti-Christian gay activist Dan Savage as an example of hatemongering? Why not name Al Sharpton as an example of a racist? The tiresome accusations that Murray is racist are based literally on one tentative sentence from his whole impressive oeuvre of social commentary, whereas Sharpton has a lengthy career of openly racist statements and unapologetic race-mongering.
And yet Sharpton can speak anywhere, anytime without fear of violence from the right, while Murray recently had to flee a speaking engagement when Antifa thugs shut it down and chased him to his car, assaulting his escort, a female professor, in the process. Dan Savage can spew his profane hate anytime, anywhere with confidence that he will remain safe, but rioters injured at least half a dozen Trump supporters and caused over $100,000 worth of damage to the UC Berkeley campus where Milo Yiannopoulos was scheduled to speak earlier this year. Barrett is arguing that shutting down Milo’s appearance is acceptable because he is “noxious” and “there is nothing to be gained from debating him.”
Barrett concludes her article by paying lip service to the necessity for “open conversations and vigorous debate about controversial or offensive topics,” then declaring that “we must also halt speech that bullies and torments. From the perspective of our brain cells, the latter is literally a form of violence.” Literally. Sorry, illiberals, but to quote from The Princess Bride, you keep using that word – I do not think you know what it means. Speech is not literally violence. Of course verbal bullying can be stressful, but to claim that speech qualifies as violence redefines both concepts and enables the left to demonize and shut down any argument they deem sufficiently stressful. That, of course, is their aim.
Defenders of the First Amendment must never budge an inch on this issue. Free speech protections must never be restricted to exclude what some consider offensive speech. As free speech proponents these days are constantly compelled to explain, the whole point of the First Amendment is to protect speech we find offensive or with which we disagree. That’s why the left craves so badly to limit it, all the while waging literal violence against the right.
From FrontPage Mag, 7/17/17
at 10:18:00 AM