The Nightmare Reality of the Communist Dream 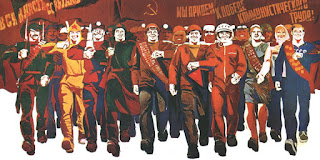 With a Republican in the White House threatening to – horrors! – make America great again, nostalgia for the Communist-utopia-that-could-have-been is running high among dejected leftists. Last Monday on May Day, otherwise known among Reds as International Workers’ Day, the New York Times actually published an encomium to those thrilling days of yesteryear “when Communism inspired Americans.” But it’s not just American communists keeping the dream alive; in the run up to May Day the week before, writing for the digital news publication Quartz, Australia’s Helen Razer explained “Why I’m a Communist—and Why You Should Be, Too.”
According to the website description, the chief focus of Razer’s work “has been what she sees as the crisis of liberalism.” The real crisis is that true liberalism has been shoved aside by a radical left that embraces violent totalitarianism, but that’s not Razer’s take. In her mind, the crisis is that pure communism hasn’t been given enough of a chance to succeed. “Communism is a system of social organization that has never been truly tried and, these days, never truly explained. Yet it inspires fear in some, derision in others, and an almost universal unconcern for what it is actually intended to convey.”
This is the excuse communists repeatedly trot out in the face of a tsunami of evidence that their ideology has indeed been tried all over the world and has proven to be arguably the most devastating, inhumane belief system ever imposed on mankind. Every country where communism has been “tried” has gone to hell because of it. That’s not a coincidence nor is it just a failed effort to get it right; that is the inevitable consequence of communism.
No no no, Razer and other communist hopefuls argue. Marx’s ideas aren’t evil, just misunderstood. All this “fearful European talk about the ‘specter’ of communism,” for example, is nothing but “jittery gossip,” she states. So, “given that a) Marx is tough, and b) you’re pretty busy making profit for capitalists all day,” she has taken it upon herself to enlighten you about this “historical stage vital to the flourishing of all.”

Of all the descriptors one might associate with communism in the real world [as opposed to academic theorizing], “flourishing” isn’t exactly one that leaps to mind. “Widespread poverty” is, however, and “mass starvation,” not to mention “purges,” “totalitarianism,” and “secret police.” But Razer doesn’t mention any of those downsides. In the minds of her and other true believers, it is a small class of capitalists who are the enslavers and true communism will save us:
Communism is the critique and the antidote to capitalism, with all its problems, including those of social and cultural division… A communist seeks the abolition of property, whether held by the state or private firms and citizens; they want all of us to own everything equally and become our own dictators. A communist seeks conditions to end the state entirely and have all human society collectively managed.
And yet somehow, instead of ending the state, communism always seems to give rise to a soulless, all-controlling state under which human society is collectively ravaged, not managed.
“There is no blueprint for communism,” Razer continues. “[W]e can’t predict with real accuracy where we are being led by the next stage.” Actually, we can. Based on vast experience we can predict with 100% accuracy that communism will lead to ruinous corruption, universal misery, crushing poverty, gulags and torture, starvation and mass death, and the end of freedom.
Razer rather hilariously admits that a few eggs must necessarily be broken to make Marx’s idealized omelet. “This is not to say that the seizing of power by socialists eager for the communist stage of history is going to be a picnic. Things started well at the Winter Palace in St. Petersburg, but they didn’t continue in this strategic, bloodless mode.” But hey, next time things will go smoothly: “A future transfer could be peaceful—even the result of democratic elections—allowing for the possibility in the West of a truly democratic election free from intervention by the capitalist class.”
Razer concedes that capitalism has given us enormous abundance, leisure and freedom, but then complains that it has left us with “environmental devastation” and nuclear weapons, threats that will require “a certain level of totalitarian management. It is my view that an honest communist can now no longer say that the state can be done away with entirely—these true threats require a handful of true bureaucrats to manage them.”
Well at least she’s an honest communist in this respect, admitting that a pure collective isn’t possible and that it will take “a certain level of totalitarian management” and a handful of “true bureaucrats” to run things. She doesn’t explain how we are supposed to transition from a bureaucratic totalitarianism to that beautiful dream of a truly democratic collective.
Nevertheless, there’s a rosy future for communism ahead, Razer believes. “Capitalism had many false starts,” she declares. No mention anywhere in her article of a hundred years of communism’s brutal false starts in the former Soviet Union, China, Cuba, Cambodia, North Korea, the former North Vietnam and East Germany, in eastern Europe, even in African countries like Angola. No mention of the untold millions of deaths – by some estimates over 100 million – and the incalculable torment from murder and starvation caused by communist regimes.
And yet Razer blithely pronounces communism on the upswing and capitalism fatally ill. “And now, in the view of a commie such as myself, [capitalism] is enduring a very real end.” On the contrary, it is communism that is coming to an end everywhere in the world in the face of the appeal and promise of capitalist freedom and prosperity. Capitalism is not utopian; like humanity, it is messy and imperfect under the best of conditions. But it contains within itself the mechanisms for self-correction, and it embraces human nature – unlike the dehumanizing nature of communism.
Communists like Helen Razer and her fellow travelers at the New York Times cling to their dream of a collective utopia, but deny that its reality is inevitably a nightmare.
From FrontPage Mag, 5/5/17
at 8:36:00 PM