Why The Rock Shouldn’t Run for President 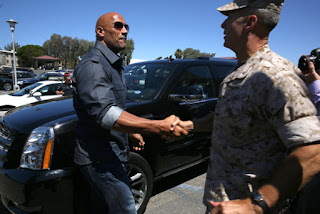 Dwayne Johnson is riding about as high as one could get these days. The Artist Formerly Known as The Rock is the highest-paid actor in Hollywood, People magazine’s Sexiest Man Alive, and the NAACP’s Entertainer of the Year. His current film, The Fate of the Furious, set the record for the highest-grossing opening of all time, and two more films, Baywatch and Jumanji: Welcome to the Jungle, are slated to open this year. The third season of his HBO series Ballers premieres this summer as well. His multimillion-dollar smile gleams from covers of magazines ranging from GQ to National Review. It’s enough to go to an ordinary mortal’s head.
And perhaps it has, because Dwayne Johnson is now openly speculating about taking a run at the White House.
The Washington Post ran an op-ed last year suggesting that the now 45-year-old star would make an intriguing candidate with a serious shot at winning a future presidency. It’s not like there aren’t precedents for Hollywood stars conquering politics. Ronald Reagan, to name the most successful example, went from B-movie actor to conservative presidential icon. Arnold Schwarzenegger became governor of California. And of course, Donald Trump, while not a Hollywood star per se, used his success in the world of reality TV as a springboard into the Oval Office.
Since that WaPo article, Johnson seems to have been mulling over his own ascendance to the White House, because he told GQ in a recent interview, “I think that it’s a real possibility”:
“A year ago it started coming up more and more. There was a real sense of earnestness, which made me go home and think, ‘Let me really rethink my answer and make sure I am giving an answer that is truthful and also respectful.’ I didn't want to be flippant—‘We'll have three days off for a weekend! No taxes!’”
“If [becoming president] is something he focused on,” says Ron Meyer, the NBC Universal vice chairman, “he probably would accomplish it. I think there's nothing that he couldn't do.” I agree. The question is not whether Dwayne Johnson could become President, but whether he should.
First, there is the legitimate concern that our obsession with celebrities may be steering us toward a questionable habit of electing presidents who lack qualifications and/or experience. It is not beyond the realm of possibility, for example, that a future slate of presidential candidates could be dominated not by senators and governors but by a constellation of pop culture stars like George Clooney, or Beyoncé, or even Kanye West, who has actually threatened to run. But that’s a broader topic for another day. Let’s stay focused on Johnson.

One would be hard-pressed to find a Hollywood star today more widely loved than Dwayne Johnson, and part of that popularity stems from the fact that he purposefully doesn’t alienate half his audience politically. Unlike far too many self-serious celebrities, who feel compelled to virtue-signal to their left-leaning peers and to berate middle America about climate change, gender fluidity, and America’s legacy of racism, Johnson maintains a very diplomatic neutrality; in fact, he turned down endorsement requests from both Hillary Clinton and Trump in the last election and says he is a registered independent.
“[I] felt like if I did share my political views publicly, a few things would happen,” he told GQ. “I felt like it would either (a) make people unhappy with the thought of whatever my political view was. And, also, it might sway an opinion, which I didn't want to do.”
And that’s where politics and Dwayne Johnson don’t mix. If he considers a campaign, he won’t be able to please everybody the way he does now. To get a campaign off the ground he will have to pick a side and start taking specific policy positions; once that happens, he goes from being a beloved celebrity to a polarizing politician.
Johnson sees himself as a unifier. Despite his imposing physique, World Wrestling Federation awards, and kick-ass persona, I believe he is at heart a lover, not a fighter. He wants to bring people together to work out their differences. Here he is telling GQ his vision of presidential leadership:
“[If I didn't agree with someone] on something, I wouldn't shut them out. I would actually include them. The first thing we'd do is we'd come and sit down and we'd talk about it... We all have issues, and we all gotta work our shit out. And I feel like one of the qualities of a great leader is not shutting people out... Even if we disagree, we've got to figure it out. Because otherwise I feel, as an American, all I hear and all I see in the example you're setting is ‘Now I'm shutting you out. And you can't come.’
[Disagreement] informs us. The responsibility as president—I [would] take responsibility for everyone. Especially when you disagree with me. If there's a large number of people disagreeing, there might be something I'm not seeing, so let me see it. Let me understand it.”
Although the ideal of an independent unifier who can rise above ideology may seem appealing in our era of a divided America, voters will abandon him if his political principles are too vague and he’s too committed to compromise to accomplish anything. Voters want a visionary leader, not a placating mediator. Politics, and the world, requires a fighter, not a lover.
I happen to be a big fan of Dwayne Johnson. Like other fans, I find his relentless positivity, his infectious passion, his inspiring work ethic, his self-deprecating sense of humor, and his genuine desire to help others compelling. I love that he declares himself “extremely patriotic” and is a big supporter of our armed forces. I actually don’t believe, as I hinted earlier, that his interest in the presidency stems from fame going to his head; I met Johnson once and was impressed with what many would be surprised to hear is a quiet humility. I have no doubt he is contemplating a White House run not to be King of the World but because he sincerely believes that’s how he can do the most good for the most people.
As much as I respect that, the treacherous, all-devouring brutality of politics is not The Rock’s proper arena. He can do the most good for the most people by staying the course as a pop culture role model and creating movies and television that entertain, that inspire, that touch hearts – and that steer clear of politics.
From Acculturated, 5/16/17
at 8:46:00 PM