Palmer, Fernandez, and the American Dream 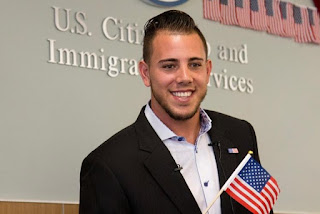 Over this tragic past weekend, the sports world lost two giant figures who, in different ways, represent extraordinary success stories of the American Dream.


The legendary Arnold Palmer passed away at 87 after an impossibly full life as one of the greatest icons in any sport, not only golf. In addition to being one of golf’s most accomplished champions, he earned a reputation as a class act, as admired and well-liked for his down-to-earth, gentlemanly demeanor as for his golfing skill. Palmer was noted, for example, for never refusing a fan his autograph nor asking to be paid for it.


I’m not a golfer but my late father was on the course nearly every weekend. He was an enormous fan of “Arnie,” as he and countless others called him – as if they were buddies, because Arnie was so personable and accessible that his millions of followers – “Arnie’s Army” – viewed him as a friend.


Two stories serve to capture Arnie’s kindness and humility, qualities too often overlooked and underappreciated in our era of oftentimes narcissistic and self-aggrandizing superstars.


In 2014 an avid, 18-year-old golfer and local tournament winner named Nate Marcoulier received a graduation gift from his older brother Adam. It was a letter from Arnold Palmer, whom Adam had written in the hope that the golfing icon would have some life advice for Nate. Both brothers were stunned when Palmer replied, congratulating Nate on his golf victories and telling him he would find life “enjoyable and fulfilling” if he followed this advice:

·         Courtesy and respect are timeless principles, as well as good manners.


·         Never underestimate the importance of a good education.


[A] gentleman came up to the car, knocked on the window with his young son and said, “I’m sorry, Mr. Palmer, but could you give my son an autograph?” Arnold turns the car off, signs the autograph, and the gentleman said, “Thank you so much, you’ll never know how much this means to me.” And Arnold looked at him in all sincerity and said, “No, sir, thank you for asking me for the autograph.” That’s Arnold Palmer.


His many trophies notwithstanding, arguably the most important prize Palmer earned was the Stan Musial Lifetime Achievement Award for Sportsmanship almost exactly a year ago, honoring Palmer’s “kindness and philanthropic commitment.” That award speaks more to the lives that he changed than the tournaments he won.


Pitcher Jose Fernandez also died last weekend, at the tragically young age of 24. Unlike Arnold Palmer, we will never know the heights to which Fernandez might have soared as an athlete or the impact he might have had on the game of baseball. But in his short life he persevered through three failed attempts at escaping the Communist dictatorship in Cuba (each of which earned him imprisonment) before finally managing to defect to Mexico. At one point in that final dangerous attempt, Fernandez had to dive overboard to save his mother from drowning. Fernandez went on to become Major League Baseball’s 2013 Rookie of the Year and was twice named an All-Star in only four seasons for the Miami Marlins before dying last Saturday in, ironically, a boating accident. He had just become an American citizen and announced only days ago that his girlfriend is pregnant.


Marlins manager Don Mattingly became emotional speaking to reporters about Fernandez, praising the pitcher’s “joy and passion” for the game. One mourning fan wrote a tribute celebrating one quality about Fernandez that “stands out above the others: joy… No one has ever loved playing the game as much as Jose.” He went on to describe the pitcher as “a young man who was so talented he skipped most of the minor leagues and whose joy and simple, honest gratitude to be playing baseball flooded out of him so powerfully that you couldn’t help but share in it.”


Both these men exemplify, in different ways, the American Dream. In addition to his incalculable impact on the game of golf, Arnold Palmer parlayed his championships and unforced charisma into a side career as a product pitchman; at the time of his death his personal worth was estimated at nearly $680 million. He had gone from caddying at a local country club as a youth to buying that same club as a superstar adult. Fernandez escaped obscurity and the oppression of a totalitarian regime to find fame and fortune playing the game he loved.


But both men will forever be remembered for so much more than their success and rare talent.  They exuded virtues that inspired others and transformed lives. They exhibited qualities of character that elevated their respective sports. They will be legends for the right reasons.
From Acculturated, 9/28/16