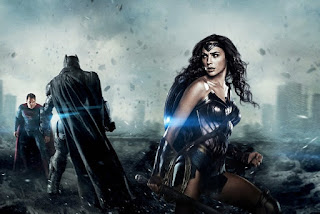 Okay, that last example was a bit of a stretch, but the point is that the old familiar superheroes are beginning to feel stagnant and occasionally even morally confused, while the women are an invigorating breath of fresh air. Even many male comic book geeks seem just as eager as fan-girls are for the breakouts of such characters as Harley Quinn and Wonder Woman. But while this wave of female empowerment may be exhilarating for many, there is also an element of emasculation here as well.

That may seem like an absurd statement. Isn’t that taking this comic book juvenilia too seriously? Aren’t superhero movies for kids? But that’s exactly the point. Such extraordinary characters as, say, Captain America are important because heroes are symbols of the way a culture views standards of courage and virtue, power and freedom, good and evil. From the Goliath-slaying David to Beowulf to Superman, our legendary heroes define our times and help our youth – in particular our boys – develop a moral imagination. Superheroes are valuable personae for preparing boys, through play and fantasy, to choose good over evil and to one day stand courageously themselves against evil in the real world. And “when a culture falls down on its job of constructing a meaningful hero-system for its members," writes the cultural anthropologist Ernest Becker, life “explodes in anarchy and chaos.”

Boys – more than girls – need a cultural pantheon of vigorous warrior heroes in place as role models of both physical and moral power. Why “more than girls”? Because despite Hollywood’s current politically correct obsession with depicting women as warriors who are every bit the equal of men, in reality men are and always have been, with rare exceptions, the fighters, the protectors of the weak, the defenders of home and country.

This is not at all to suggest that women are incapable of courage or patriotism or ferocity in defending hearth and family, only that for thousands of years battle has properly been the domain of men and will continue to be. The stories of our heroic icons are the inspiration for our future heroes, and today those stories are largely being told in movie theaters. So by all means, Hollywood, empower women to be heroines in their own right rather than victims, but don’t let our heroes diminish in the process.