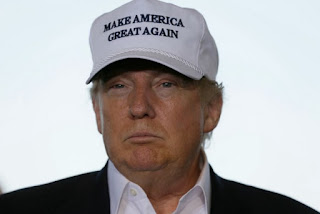 The feminist term “toxic masculinity” is trendy these days, but it’s never presented in contrast to a healthy, positive masculinity. That’s because those who use the term don’t believe there is a healthy, positive masculinity; their aim is to dismantle the entire artificial construct of manhood and smash the patriarchal chains that keep us from evolving. This is not simply snarky exaggeration; Hamblin, for example, explicitly states that Trump makes him wish that “f*ck the patriarchy” were as common an expression as “What’s up?”

Trump’s swagger and aggression make him, according to Hamblin, an absolute “caricature of a man’s man” because he browbeats, berates, and boasts. To be clear, though, those actions do not characterize a man’s man; they characterize a bully. A man’s man doesn’t need to push people around or brag about the size of his, er, hands. He commands respect and admiration not by calling attention to his own achievements or belittling others, but through the quiet fulfillment of his duty as a man, husband, and father. By that measure, someone like TV host and spokesman Mike Rowe is a man’s man. Among other contemporary celebrity examples, actors Dwayne Johnson and Mark Wahlberg are men’s men.

Hamblin goes on to say that Trump’s “signature traits, confidence and bravado, are hallmarks of masculinity. Through them he convinces people that he’s correct, in control and trustworthy, even when his words are false or misleading.” What Hamblin is describing is not a confident man but a con man. Again, bluffing and bravado are not hallmarks of confidence or masculinity but of insecurity.

Hamblin is wrong about Trump’s supporters being drawn to him by this blustery egotism masquerading as manhood. What Hamblin is trying to do in his article is kill two birds with one stone: demonize Donald Trump and demonize American masculinity. Therefore he strips away the political context that enabled a figure like Trump to emerge and tries to tie the candidate’s popularity instead to the kind of working class masculinity Hamblin and his ilk look down upon.

But what support Trump has galvanized is not due to an irresistible, “musky” manliness. It is because the American males Hamblin dismisses as bitter, uneducated racists are tired of being screwed over by corrupt, unprincipled politicians year after year. They’re tired of the mainstream media lying to them and holding them in the sort of contempt of which this Atlantic article reeks. They’re tired of being openly denigrated by elitist “intellectuals” like Hamblin for their supposed white privilege and their guns and religion. They are, like Network’s Howard Beale, mad as hell and they’re not going to take this anymore. Enter Trump.

My aim is not to defend Donald Trump politically but to counter James Hamblin’s attempt to use him to smear American manhood as toxic arrogance, egotism, and bullying. Masculinity at its most quintessentially American is marked by a frontier self-reliance, a no-nonsense commitment to hard work and duty, courage and service to others, humility and gratitude, and an unforced self-confidence. That’s the antidote to the “toxic” version.