'The Vikings' and the Clash of Civilizations 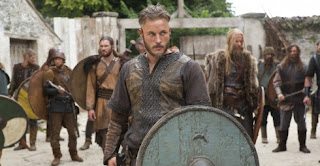 One of the unexpected and most intriguing elements of the new History Channel series The Vikings is the main character Ragnar’s fascination with his prisoner, a young Christian monk seized during a Viking raid on an Anglo-Saxon monastery. The clash of their value systems echoes the real-life confrontation of paganism and early Christianity in ancient Europe, which would shape the Western World.

In case you haven’t been keeping up with one of the best-produced and most compelling new series on television, The Vikings centers on Ragnar (Australian actor Travis Femmel), a Norseman of the eighth century whose rebellious spirit and lust for riches drives him to defy his ruthless king (Gabriel Byrne) and undertake a dangerous journey across the North Sea to the legendary lands to the west. There he and his cohorts discover easy treasure at the unprotected monastery at Lindisfarne, off the northeast coast of England – an actual historical event which marked the beginning of the notorious Viking Age.

During the raid, another Viking spies a wooden figure of the crucified Christ on the wall and comments that any god who would allow himself to be nailed to a cross and killed is not one to be feared. “He cannot protect anyone,” says another. “He is not alive like Odin, Thor or Freya.” And so the slaughter and the plunder begin.

The raiders find the young monk Athelstan cowering with an illuminated Bible, and Ragnar asks why he clings to that, of all the treasures in the monastery. “Because without the word of God,” Athelstan replies, “there is only darkness.” What defenseless monks the Vikings do not kill, they bring back home to sell as slaves; but something about Athelstan compels Ragnar to keep him as his own.

Like all his Norse companions, Ragnar is a polytheistic pagan and grim fatalist whose gods are fickle and whose heaven is a feast hall reserved only for the bravest warriors, so his attitude toward the Christian’s monotheism of peace ranges from curiosity to contempt. He and his wife even taunt Athelstan about his celibacy. Their children ask the monk which god he favors. Athelstan is taken aback: “There is only one god.” It’s the kids’ turn to be taken aback by this concept.

The Vikings held to a confused religious world view of capricious gods who manifested themselves in the natural world, who commanded no morality, and who promised no reward of an afterlife except for warriors who died heroically. Christianity offered a spiritual inner life, a moral code, and perhaps most compelling of all, a clear vision of life after death. Up to then, the Viking view of life and beyond resembled that described by the eighth century historian Bede, who compared it to the flight of a sparrow out of the cold night, into the warmth of a mead hall, and back out again into oblivion.

In his book The Vikings (no relation to the series), Johannes Brondsted writes:

The [Norse gods] religion was an aristocratic one and had little to give the ordinary man by way of an after-life. And consequently in the end he turned to the purposeful monotheism of Christianity, with its hope and help for all. So Christianity triumphed.

It will be interesting to see how this dynamic, this clash of civilizations, develops over the course of The Vikings, and whether Ragnar will begin to question the old, failed ways, or Athelstan will lose faith in the new.