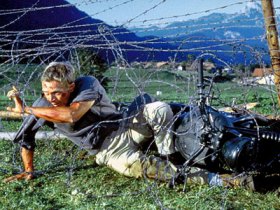 This is the 50-year anniversary of the release of The Great Escape, the classic adventure film based on the true story of a daring escape from a Nazi stalag in World War II. Despite the movie being an ensemble piece featuring practically every Hollywood leading man at the time (James Garner, James Coburn, Charles Bronson, et al), actor Steve McQueen asserted his charismatic presence and emerged from the film as the biggest star in the world. Seemingly overnight he went from being “the Cooler King,” as his Great Escape character was known for having earned so much time in solitary imprisonment, to “the King of Cool” – an icon of rugged manliness and classic, masculine style.

Unfortunately, thanks in part to a harsh childhood warped by a broken home, McQueen was also a selfish and insecure egomaniac, a world-class womanizer who was compulsively unfaithful to multiple wives, a world-class substance abuser, and an insufferable jerk (to put it politely) even to those closest to him.

But there was yet another, less-renowned side to Steve McQueen.

After The Great Escape, he went on to star in The Sand Pebbles, The Thomas Crown Affair, Bullitt, Papillon, The Towering Inferno and other movies. Along the way, he exasperated studios, directors and co-stars with his demands, which included a puzzling habit of requesting free items like razors and jeans in bulk from movie sets. It was later revealed that McQueen had been quietly donating these things to the Boy's Republic reformatory school in California for troubled and orphaned kids, where he himself had spent time as a teen. He even visited the school occasionally to hang out with the boys just like a regular guy, chat with them about his experiences, and encourage their sense of self-worth.

Later in life, McQueen was drawn to explore Christianity and to reflect deeply on his life, largely through the influence of a pilot friend and the famous evangelist Billy Graham, who met with him on a number of occasions to discuss life and who gifted him with a Bible. McQueen acquired a newfound faith which not only compelled him to try to change his life and make amends, but also helped him come to grips shortly thereafter with the terrible discovery that he had contracted the fast-moving cancer mesothelioma. In his short remaining time, he apologized to some he had wronged and sought their forgiveness.

McQueen, who would have turned 83 last week, died in 1980 at the tragically young age of 50 in a Mexican clinic where he had been seeking an alternative treatment for his disease. He was found on his deathbed with Graham’s Bible open in his hands.

Today the actor and fanatical racer of cars and motorcycles still resides high on every list of the sexiest, most stylish, and biggest movie stars of all time. He is remembered by many as the epitome of the “live fast, die young” credo. But Steve McQueen will always be remembered in perhaps a more meaningful way by the men who were once loveless boys in a reformatory, to whom he gave his kind, heartfelt attention and support, and by those to whom he reached out in his belated quest for redemption.