The Last Man: An Interview with Vince Flynn 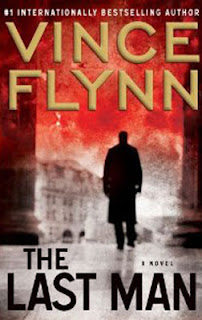 Vince Flynn is the author of fourteen thriller novels, every one of which has hit the New York Times bestseller list, and all but one of which feature Flynn’s no-nonsense, politically incorrect, scourge-of-Islamic-evil, protagonist Mitch Rapp. Flynn is so clued in to our national security apparatus that his books have actually been put on security review by the Pentagon before being released, and used by the Secret Service to modify their protocols. One high-ranking CIA official has even told his people, “I want you to read Flynn's books and start thinking about how we can more effectively wage this war on terror.”

I received an advance copy of Flynn’s latest, The Last Man, which releases November 13. A typical Flynn page-turner, it revolves around the kidnapping of a valuable CIA asset in Afghanistan, and Mitch Rapp’s mission to retrieve him.

Mark Tapson: The Last Man is your thirteenth novel to feature Mitch Rapp. What is it about him that you think resonates with so many readers?

Vince Flynn: I go back to that Churchill quote, “We sleep soundly in our beds because rough men stand ready in the night to visit violence on those who would do us harm.” Most Americans know there are bad people out there who want to do bad things and hurt Americans.

When I sat down to create the character, I’d graduated high school and college in the ‘80s, and I had seen the rise of Islamic radical fundamentalism and also the decline of communism. So I thought, what’s going to be the next big threat? And I thought these crazy, racist, bigoted Islamofascists were going to be the problem, and we’d better go on the offensive. This sounds harsh, but I thought we’d better start killing them before they kill us. I think a lot of Americans would prefer it if they could live their lives and have somebody like Mitch Rapp go over there and take care of these problems before they get to our shore. Unfortunately our politicians don’t often have the stomach to handle these problems that way.

MT:    Speaking of politicians, not only are Presidents Clinton and Bush both big fans, but you’ve heard now that even Obama may be. Are you surprised that a politically incorrect character like Mitch Rapp has fans on both sides of the political aisle?

VF: I’m not sure I buy into the Obama rumor, but I’ve heard where Governor Romney has said multiple times that he’s been reading Vince Flynn novels, so I know he’s a fan. I always try not to get into specific political policies. I don’t want to be one of these Hollywood types who run around shooting off their mouths and pissing off half their fans. So I try to stay out of the political stuff. My fans don’t care what my opinion is about Obamacare. But when it comes to the national security front, I’m all in.

I was very disappointed and critical of these senators now in this administration that ran around for seven of the eight Bush years undercutting Cheney and the CIA for years on Guantanamo and were naïve enough to parrot talking points like “Guantanamo is the greatest recruiting tool we ever gave al Qaeda,” which lacks a fundamental understanding of Islamic radical fundamentalism. Guantanamo doesn’t motivate them one way or another. Then the Obama administration takes over and says they’re gonna shut it down in a year. And here we sit four years later and it’s open, because there’s no other option. And you’ve never heard any of these people – John Kerry, Harry Reid, none of these people – stand up and say, “We apologize, we were wrong, we should’ve been more unified on national security.”

In terms of understanding our enemy, what happened in Pakistan last month was probably the most illustrative example of what we’re up against, when the 14-year-old girl was shot. All she wanted to do was get educated. And these animals from the Taliban, when they found out she had survived their attack, they issued another statement that said, “We’re gonna make sure we kill her this time.”

It’s very naïve to associate our values with somebody else’s. I have a lot of liberal friends who thought that if we just get Bush and Cheney out of the White House and replace them with liberal Democrats, that that part of the world would love us and our problems would go away. And I told them, “You don’t understand what we’re up against. These people hate homosexuals, they hate women’s rights, they hate Jews, Christians, everybody that doesn’t buy into their fundamentalist, radical view of Islam. They hate us so much they’re willing to kill themselves and a lot of innocent people in the process, and they don’t lose a wink of sleep over it.”

I hate when, in discussions about Islamic fundamentalism, Americans get all sheepish and say, “Who are we to judge? They’re different from us.” That’s a bit like Northerners in the ‘50s and ‘60s saying, “Who am I to judge the KKK?” It’s so gutless. When a group recruits a Downs Syndrome child to go into a bazaar and blow himself up and a bunch of other Muslims, we need to stand up and say, “These people are evil and twisted, and no amount of understanding why is going to solve the problem.”

MT: Your new book deals with the rise of what we’re all too familiar with now, “green on blue” attacks in Afghanistan. How do you think our whole “winning hearts and minds” approach to the war there is working? What’s the sense you get from your military and intelligence contacts as to how they feel we’re progressing in what used to be called the war on terror?

VF: “Hearts and minds” is a noble effort, and it’s gonna pay off in certain parts of the country, and there’s no way we’re gonna be able to penetrate it in other parts. Post-pullout, I think Afghanistan’s gonna look a whole lot like it did before the war started. We’re gonna see skirmishes, there’s gonna be flareups, and it’s gonna be a tribal battle that will bleed that country for decades to come because this is who they are. I hate to say that they’re not just gonna lay down their weapons and get along, but this is a country that’s in such dire need of modernity, and it’s not gonna happen overnight, maybe not in our lifetime. Overall, “hearts and minds” is not going to work, because the Taliban, al Qaeda, these other groups, they don’t want it to work. Their minds are so small that they think it’s a good idea to shoot a 14-year-old girl who wants to go to school.

Now in terms of the war on terror, you won’t hear them say it out loud, but they’re pretty proud of what they’ve done, the men and women of the Special Forces community, intelligence community, and law enforcement. They’ve managed over the last eleven years to make sure we’ve avoided another major terrorist attack. They’ve come pretty close to batting a thousand. Now, the Benghazi thing was an absolute disaster and a national embarrassment. But that’s a situation like in my books, where comfortable bureaucrats back in Washington are saying no to the men in the field. And I think it’s pretty embarrassing that we can’t get any straight answers. Most embarrassing is that the press isn’t looking for any answers.

MT: CBS Films picked up the rights to the Mitch Rapp character to develop what will hopefully be a movie franchise. Did you meet with any resistance trying to find a home for Rapp and your books in left-leaning Hollywood?

VF: Oh absolutely. Mitch Rapp is the single biggest-selling male thriller character today who hasn’t had a major motion picture. These books have sold very, very well, but we could not get anyone in Hollywood to lock on, especially during the Bush-Cheney years. They wouldn’t touch it. Hollywood misses a lot of opportunities because they don’t play to the whole marketplace.

People often ask, “Why do you think this franchise is so successful?” A lot of reporters and lawyers write novels and then wonder why they aren’t that successful, and I say, “It’s because your heroes are reporters and lawyers, and the public finds that hard to swallow.” In my series, the heroes are the men and women of the Secret Service, the CIA, Special Forces, the whole national security apparatus. And the villains are, shockingly enough, Islamic radical fundamentalists, which the public has a very easy time believing. No matter how much the mainstream media would like to think otherwise, the public actually gets it. The secondary villains that I have are politicians and bureaucrats. It’s very easy to build a story around that because it’s reality.