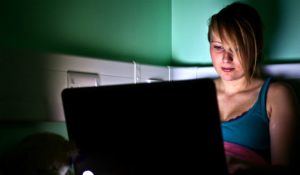 In Program or Be Programmed, his compelling short guide to seizing control of your life back from the seductive embrace of technology, Douglas Rushkoff describes the oddly detached lifestyle of a young trendsetter named Gina who has an “always on” relationship to her social media. She hops from one hip party to another, but is never truly present:

Instead of turning the phone off and enjoying herself, however, she turns her phone around, activates the camera, and proceeds to take pictures of herself and her friends – instantly uploading them to her Facebook page for the world to see…

She relates to her friends through the network, while practically ignoring whomever she is with at the moment. She relates to the places and people she is actually with only insofar as they are suitable for transmission to others in remote locations. The most social girl in her class doesn’t really socialize in the real world at all. [Emphasis added]

In this era of easy worldwide connectedness, our youth are suffering an unprecedented degree of emotional detachment, depression and loneliness. “The more connected we become, the lonelier we are,” argues Atlantic writer Stephen Marche in “Is Facebook Making Us Lonely?” MIT’s Sherry Turkle, in her book Alone Together, concurs that our relentless online connection ironically leads to alienation and solitude. Marche nails it: “A connection is not the same thing as a bond.”

Andy Braner, author of the new book Alone: Finding Connection in a Lonely World, views the social media sites themselves as the biggest cause of loneliness among young people today. “We’ve created this illusion of friendship with a click and a ‘like,’ especially in this young generation of students who don’t know life without social media,” he says. These kids have grown up barely experiencing friendship without an online component, and that element actually detracts from rather than supplements their real human interaction. “It’s hard to know how to act around people now,” says Phil Gibson, a sophomore at University of San Francisco, “because the only thing kids know is how to act on Facebook.”

A surprising percentage of teenagers are beginning to get this and want out. A study by Common Sense Media found that 43% of teens wished they could unplug from their technology. Nearly half of teens say they get frustrated with friends for texting, surfing the net, or checking their Facebook when they hang out together. A third of them complain that using social media takes away from face time with actual people, and nearly half agree that social media often distract them from the people they're with when they do get together in person.

Like Rushkoff and Turkle, Braner argues that despite all our fetishized techno-trappings, what humans still instinctively need is each other. His mission is to personally reach out to teenagers, help them at least partially unplug from their addictive interaction with an illusory online community, and guide them toward feeling a true sense of belonging and pursuing a life of purpose.

“People who need people,” as the old Broadway hit goes, “are the luckiest people in the world.” The song isn’t about neediness, but about people who aren’t emotionally closed off, who are capable of loving and connecting with others. The message of thinkers like those mentioned above is: Deep down, we are all people who need people, and reconnecting with that is an important step toward rehumanizing ourselves.